In Indonesia, simultaneous campaigns of communist phobia and of homophobia portray both groups as enemies of the nation and condemn both for treacherously undermining the state’s morality and weakening its vigilance.

After the fall of the military dictatorship in Indonesia in 1998, for a few years a discourse of human rights blossomed. There was hope that the many grave human rights violations committed by the military under General Suharto would be addressed. But human and women’s rights organisations were not the only ones that enjoyed the new democratic freedoms. Fundamentalist Islamic groups that had hitherto been suppressed also started to assert themselves. They created a climate  in which  Islamic values became dominant and human rights were portrayed as Western. At the same time the military, which slightly withdrew after 1998, largely remained in power and  at present the generals are reasserting themselves. The last few years have seen an aggressive campaign of homophobia, feeding into the communistphobia that dominated public discourse since the mid 1960s. Then, as now  a sexual moral panic was created to incite popular unrest. The first sexual moral panic exacerbated existing tensions between communists and Muslims, and a genocide followed, in which between 500.000 and three million people were slaughtered. The present sexual moral panic serves to demonise human, women’s and sexual rights activists and to impose a morally conservative agenda on the society. The perpetrators of the many crimes against humanity committed by the military and the militias under their control continue to live under conditions of impunity.

Chart the Convergence of Communist- and Homophobia in Indonesia

In the early hours of 1 October 1965, soldiers loyal to President Sukarno abducted  and murdered six generals and a lieutenant. General Suharto quickly crushed what he immediately called a coup attempt by the Communist Party of Indonesia (PKI) and then organised an extermination campaign of the party. His troops imprisoned hundreds of thousands of people, murdered probably one million members of progressive organisations and supporters of Sukarno. Within a year the general had managed to seize power from President Sukarno. The military dictatorship that he established is called the New Order period. The active role of Suharto in both the alleged coup attempt and in the extermination campaign, his advisors and the military, and the complicity of the CIA and other intelligence services in helping the army to build a mass base prior to 1965 and to execute the genocide, has been conclusively documented (Melvin 2018; Scott 1985; Simpson 2008; Suroso 2013; Wieringa and Katjasungkana 2018). 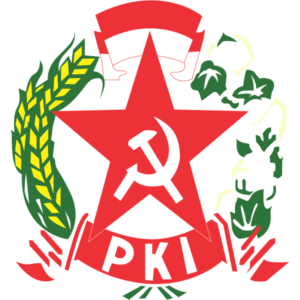 This creeping but very violent and successful takeover of government was accompanied by a propaganda campaign to incite Muslim, Christian and other conservative mass organisations to participate in the mass killings. Suharto claimed, falsely, that the PKI and its supporters were opposed to religion and the national philosophy of Pancasila (Herlambang 2013; McGregor 2007; Wieringa and Katjasungkana 2018). Through the media, which he controlled, he also accused young girls of around 13–14 years of age from various PKI-affiliated organisations of seducing the generals by performing, unclothed, a lurid dance, the Fragrant Flower Dance, while singing the ‘communist’ song Genjer-Genjer. The women’s organisation, Gerwani, was portrayed as having instigated their actions. The girls were alleged to have castrated the generals and gouged out their eyes. This story was concocted to link PKI and progressive, politically active women with unspeakable sexual perversions, and to portray the party and its mass organisations as inhuman, primitive and evil (Wieringa 2002).

This first sexual moral panic was so successful that, more than 50 years later, the now-elderly women survivors of the mass incarceration of PKI members and sympathisers, many of whom suffered repeated sexual abuse as inmates, are still stigmatised. Moreover, the phobia about communism is still so strong that today’s younger feminist activists are often accused of being communists, or of being the ‘new Gerwani’. Suharto used the Gerwani myth to help justify the campaign to wipe out ‘amoral’ communists and instil a conservative family ideology. In the decades that followed, state control over women’s sexuality, and an emphasis on women’s docility as wives and mothers, would become the bedrock of the regime (Wieringa 2003).

In 2015, events marking the 50th anniversary of the 1965 genocide set off a new wave of hysteria about communism. The International People’s Tribunal on 1965 Crimes Against Humanity in Indonesia (IPT 1965) was held in The Hague in November 2015. The tribunal gave new impetus to efforts to establish the truth about what happened (Wieringa, Melvin and Pohlman 2019). The judges found that Indonesia was guilty of committing crimes against humanity on nine counts after 1 October 1965 and that those crimes fell within the definition of genocide.

Coinciding with the rise in anti-communist sentiment, in late 2015 and early 2016 a wave of hostile, anti-LGBT sentiment hit the press, fuelled by homophobic statements issued by high-level political figures that violated the rights of LGBT persons to freedom of expression, privacy and freedom of assembly. This began as a campaign to ban LGBT organisations from Indonesian campuses and then turned into broader condemnation of LGBT groups in general. The education minister, M. Nasir, for instance opined that ‘the presence of an LGBT group on campus harms the morality of the people’ (Wijanarko 2016).

Political parties joined the chorus, including the National Awakening Party ( PKB), a moderate Muslim party associated with the late President, Abdurrahman Wahid, who was known for his commitment to diversity and pluralism. Based on ‘Eastern and religious values’, and despite reaffirming its commitment to pluralism, the party agreed that LGBT groups should be banned from universities. On January 24, 2016, the chair of the People’s Consultative Assembly (MPR), Zulkifli Hasan, called for homosexuality to be banned, arguing that it did not ‘fit with the culture of Indonesia’. Since then anti-LGBT legislation is being prepared.

On February 5, 2016, the National Commission for Human Rights urged public officials to stop making comments that infringed the human rights of, and incited violence towards, the LGBT community. It also called on law enforcement agencies to take action to curb anti-LGBT abuse perpetrated by community organisations and individuals. But this call fell on deaf ears. The same former generals who had been issuing warnings about a communist threat featured in the anti-LGBT campaign. They included defence minister Ryamizard Ryacudu, who declared in February 2016 that ‘the emergence of a pro-LGBT movement among Indonesia’s youth poses a larger threat than nuclear warfare’ (Tempo 2016). Although this was clearly a preposterous statement, he was not alone in believing that the LGBT community undermined the nation’s youth and imperilled national security.

The effects have been felt all over the country. The state, which should defend minorities, has instead turned a blind eye to violations of the basic rights of its LGBT citizens. February 2018, the municipality of Depok announced it would set up a taskforce, including police officers and religious leaders, to ‘anticipate the spread of LGBT’ among young people (Jakarta Post 2018; Smith 2018). In many parts of the country, police have conducted raids on places where LGBT people congregate or live, targeting waria  (MTF transpeople) and masculine-identified lesbians in particular, as they are the most visible members of the LGBT community (Topsfield 2017).

Whereas communists were some of the most despised people in Indonesia during the military dictatorship, today that unenviable position seems to be occupied by LGBT persons. A survey conducted in April 2016 by the Indonesian Survey Institute and the Wahid Institute found that the LGBT community was the minority group most disliked by Muslim people in Indonesia. The results showed that 26.1 per cent disliked LGBT people, and 16.7 per cent communists. In 2018 a survey by Saiful Mujani Research and Consulting found that 87.6 per cent of respondents who were aware of the term ‘LGBT’ believed that LGBT people posed a threat to the nation (Coconuts 2018).

Hate-mongering against communists inspired the  first sexual moral panic, the 1965 sexual slander against Gerwani, and this established a pattern in which ‘deviant’ sexuality came to be viewed as a threat to the nation. To further its own political interests, the military regime imposed uniformity on society, including  ‘traditional’ gender and sexuality norms. The effect of a tyrannical system in which human rights were ignored was to defile the diverse and vibrant culture of Indonesia. After decades of indoctrination and propaganda, and in the gap left by the killing or silencing of thousands of teachers and artists who could be linked to the progressive artists’ association LEKRA, a climate of intellectual apathy took hold, breeding the kind of warped reasoning that still characterises much of the present-day campaigns against communism and homosexuality. From the mid-New Order period onward, and especially after 1998, growing Islamic conservatism has fuelled anti-LGBT views in much of society, including the educated middle class. These conservative, patriarchal, religious ways of thinking have come to dominate the country’s academic and religious institutions.

The military and conservative political and religious leaders have propagated the widespread view in society that the nation has to be defended against threats to its integrity and morality, defined as attacks on the Pancasila and Islam. Science is distorted to confuse homosexuality with paedophilia and contagion, and sexual orientation (homosexuality) with behaviour. Contemporary literature perpetuates the view that a subversive underground communist movement continues to exist in Indonesia while at the same time ignoring the history of violence of hardline Islamic groups, or absolving them from blame (Wieringa and Katjasungkana 2018). Defenders of human, women’s and sexual rights who do not specifically proclaim (mainstream) religious values are seen by conservative Muslims as ‘liberals’ who do not uphold Islamic values but, instead, spread LGBT propaganda and communist ideas.

Another effect of these parallel and almost simultaneous campaigns, of communist phobia and of homophobia has been to strengthen the discrimination experienced by both LGBT groups and victims of the 1965 genocide. The LGBT community has become linked in the public mind with communism, while the victims of the 1965 genocide, already associated with heterosexual perversion due to the first sexual moral panic, have become tainted with the stigma of homosexuality. Both groups are portrayed as enemies of the nation, treacherously undermining the state’s morality and weakening its vigilance. The simultaneous stirring up of communist phobia and homophobia has produced a toxic mix of Indonesian exceptionalism, in which globally accepted standards of human, women’s and sexual rights are ignored, resulting in humiliation, fear, social exclusion and economic distress for countless Indonesian citizens. As in 1965–66, the army has emerged victorious whereas democracy has suffered. But unlike in 1965–66, the victory is shared with conservative Muslim groups.