The Trouble of the Palm Oil Business in Southeast Asia

With name-calling and scapegoating over the polluted haze, governments of Indonesia, Malaysia and Singapore engage in a rhetorical exercise. In reality, all parties are skating around the real issues.

The palm oil industry in Southeast Asia has long created impacts on the economic life of the people, the environment and now the human rights of those who report on this business. On 20 May, Reporters Without Borders (RSF) informed that a Borneo reporter jailed after a palm oil giant complained about his report.

Diananta Putra Sumedi, the editor of the local news website BanjarHits.id and correspondent for the investigative newspaper Tempo has been held since 4 May in South Kalimantan province, in the far south of the Indonesian part of the island of Borneo, on a charge of inciting hatred in an article about a land dispute between a palm oil company and an indigenous ethnic group. 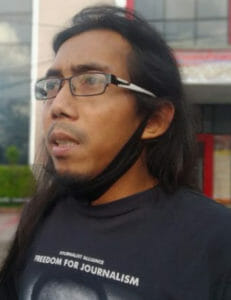 He is facing a possible six-year jail sentence on a charge of “information causing enmity” under article  28.2 of the “Informasi dan Transaksi Elektronik” (Electronic Information and Transactions Law), which is supposed to regulate online reporting.

He was arrested in response to a criminal complaint by the Indonesian palm oil giant, the Jhonlin Group, about an article he posted on BanjarHits.id and then on the collaborative news platform Kumparan last November about a dispute over land that a Jhonlin Group subsidiary allegedly took from three villages inhabited by members of the Dayak, an indigenous people in southern Borneo’s dense forests.

The Jhonlin Group initially complained to the “Dewan Pers” (the Press Council), which is supposed to resolve press issues without reference to the courts. Then, after a Dayak representative retracted one of the statements attributed to him in the article, BanjarHits.id and Kumparan both published corrections.

The matter could have ended there. But the Jhonlin Group finally filed its criminal complaint, which the police see as grounds not only for arresting Sumedi but also for continuing to hold him. Sumedi has to remain in detention because otherwise he “might continue to write stories about this case,” a police spokesman said. “Writing articles about ongoing disputes is precisely the basis of journalism and, furthermore, is also one of the best ways of resolving them harmoniously,” said Daniel Bastard, the head of RSF’s Asia-Pacific desk. “We urge South Kalimantan governor Sahbirin Noor to order Diananta Putra Sumedi’s immediate and unconditional release. The harassment to which he has been subjected sends a terrifying message to all journalists – ‘Don’t investigate the activities of one of the country’s biggest palm oil producers or you will end up in prison’.”

This is not the first time a reporter has been arrested in connection with their coverage of allegedly illegal land seizures by oil palm plantations. Muhammad Yusuf died in detention in unclear circumstances in 2018, five weeks after being arrested in South Kalimantan province as a result of a complaint by MSAM, another Jhonlin Group subsidiary, over his coverage of its disputes with local indigenous groups.

The case aroused suspicions about the independence of South Kalimantan’s institutions, inasmuch as the province’s governor, Sahbirin Noor, is the uncle of the wealthy businessman who owns MSAM. 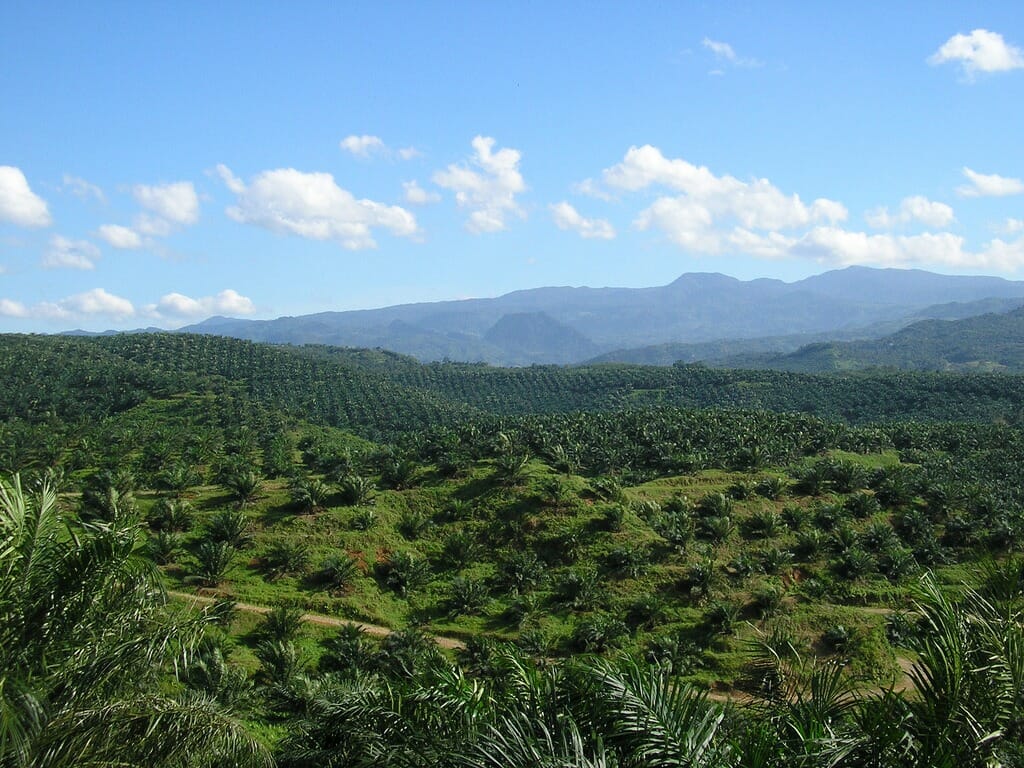 The Real Politics of Palm Oil

In 2013, I wrote an article for Yale Global <https://yaleglobal.yale.edu/content/politics-palm-oil> on the palm oil business in Indonesia. Palm oil is Indonesia’s most valuable agricultural export and the industry employs nearly 2 million people. Indonesia has laws prohibiting the slash-and-burn method of clearing fields for large plantations. Yet allowances for small farmers and a regional culture of patronage politics may hamper enforcement. Growing global demand for palm oil – for cooking or even biofuels – contributes to choking smoke spreading from large fires in Indonesia to neighboring states, and the search for blame began. Foreign investors based in Singapore and Malaysia control more than two thirds of the total production of Indonesia’s palm oil, and small farmers represent about 40 percent of the industry. Strong connections with leaders at the top can help lubricate all kinds of transactions. The intricate connections within the palm oil industry create an awkward situation, and more importantly, a crisis of good governance in Southeast Asia.

Indeed, palm oil plantations and processing have become a strategic industry for Indonesia. Palm oil is the country’s third largest export earner, contributing substantial foreign exchange earnings and providing opportunities for small-scale farmers to partake in this vibrant agro-business, thus developing the rural economy and spurring local employment. In Southeast Asia, palm oil is a traditional commodity dating back to the colonial period. But by the 1980s, increasingly high global demands for palm oil – for food products, cosmetics and even biofuels – led to industrial-scale plantations, particularly on Indonesia’s Sumatra and Kalimantan islands with their favorable climate and fertile, loamy soil conditions.

In 2008, Indonesia’s replaced Malaysia as the world’s top exporter of palm oil as a result of a series of state-led programs designed to boost palm oil production, such as privatization of previously state-run estates. Today, Indonesia has 6 million hectares of oil palm plantations. It produces up to 25 million tons of palm oil annually, or half of the world’s total production, delivering around 5 percent of the country’s annual gross domestic product. This success is also due to the industry opening to foreign investment. Malaysia and Singapore happen to represent the majority of foreign investors, outnumbering those from outside the region. Through single investments and joint ventures with local companies, the two countries control more than two thirds of the total production of Indonesia’s palm oil.

This context provides an inexorable correlation between investments from Malaysia and Singapore and the forest fires caused by the habitual slash-and-burn method used by farmers as a cheap and convenient way to clear the land for rapid turnaround of cultivation. This year in particular, the smoke haze from Sumatra has caused an even greater devastating impact on Malaysia and Singapore, in terms of economic loss and potential health hazards. The polluted haze reached dangerous levels in the two neighboring countries; Malaysia even declared a state of emergency in Muar and Ledang districts in the southern Johor state

So when the governments of Malaysia and Singapore condemned Indonesian farmers, they seemed to overlook the fact that private firms from their own countries have played a major part in the outbreak of the smoke haze. A crisis of good governance is responsible for this transnational problem.

Indonesia does have laws prohibiting slash and burn methods. For example, Article 78 of the 1999 Forestry Law stipulates that anyone found guilty of burning forests is subject to up to 15 years in prison and a maximum fine of Rp 5 billion (US$525,000). At the same time, Central Kalimantan issued its own regulation in 2008 which allows controlled burning by some small farmers. The rationale behind such regulation is that a complete ban would have adversely affected small producers and hurt the province’s rice output.

One question that must be tackled is why can managers of commercial plantations of the palm oil in Indonesia continue to pose a threat to the environment and regional economy? Helena Varkke, who studies corporate communications and sustainable development, argues in a recent study that the regionalization of the oil palm plantation sector has shaped a political culture characterized by a deep-rooted patronage system. Owing to a similar shared culture of patronage politics, Malaysia and Singapore were successful in inserting themselves into the existing patronage networks in Indonesia, which are also operating in key industries like palm oil. 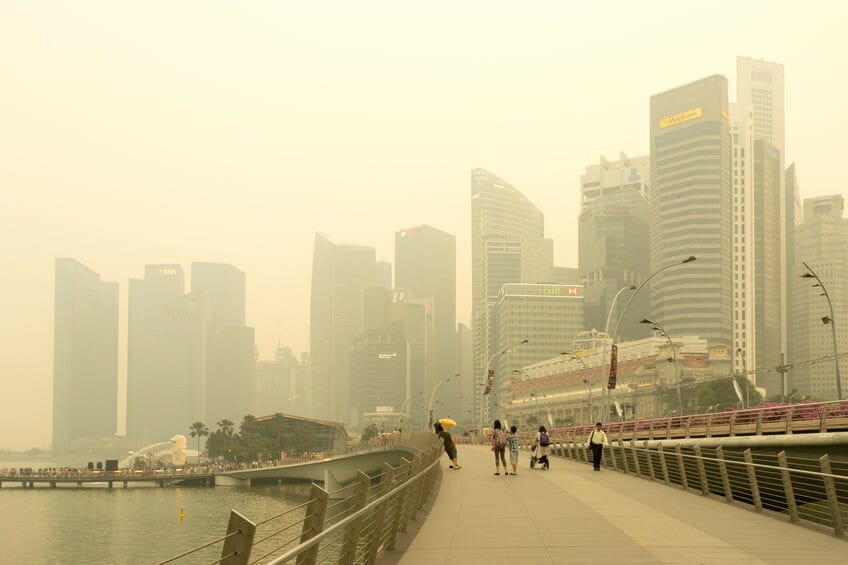 September haze in downtown Singapore caused by caused by the forest fire and burning of plantation in Indonesia. Image: Pumidol Leelerdsakulvong, 123RF

In the palm-oil sector, the patronage system serves as an essential structure involving around the production, marketing and distribution, while connecting significant actors together to facilitate their businesses through legitimate mechanisms such as palm-oil consortiums. These consortiums normally consist of local producers, senior bureaucrats and influential businessmen who have forged close links with top national leaders. For example, in the case of Indonesia, a powerful politician plays a leading role in key decisions in the group which owns a large palm oil company. These decisions could cause a huge impact on the nation’s palm oil industry. For foreign companies, it is imperative to establish links with Indonesia’s powerful individuals or institutions to break into the industry.

Several Malaysian companies doing palm oil business are significant investors with connections with Indonesian authorities, Varkkey explains. Singapore companies have in recent years also emerged as players in the Indonesian palm oil industry. Some of these conglomerates have become the world’s largest palm oil producers based in Indonesia. Normally, their board of directors consists of high-flying Singaporean personalities in politics and business. As an example of the existing patronage system, many Malaysian companies gained benefits from the Malaysian-Indonesian investment treaty in 1997 when Indonesia pledged to allocate 1.5 million hectares of land to Malaysian investors for palm oil development.

Following the pattern of Indonesia’s patronage system, Malaysian and Singaporean companies found the need to build relations with local strongmen and the national leaders of Indonesia. From setting up subsidiaries, earning licences to production and property rights to plantation lands, to appointing influential Indonesian figures to sit on the board, Malaysian and Singaporean companies have further entrenched the patronage politics within the palm oil industry. Strong connections with leaders at the top can help lubricate all kinds of transactions. 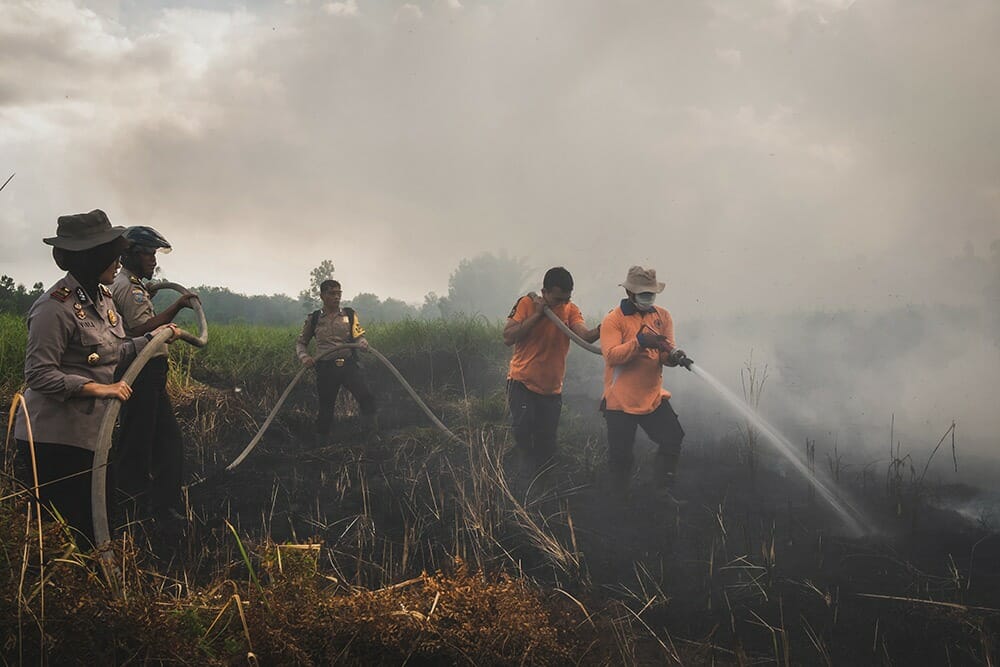 Peatlands are suitable for oil palm, yet also extremely prone to fire. Under such sensitive conditions, the Indonesian government enacted legislation in 1999 for the control on proportions of peatlands used for palm oil plantations and the ban on slash-and-burn tactics. Often, such legislation is ignored, simply because of protections offered to firms by those of influence within the Indonesian government and a lack of enforcement. Thus, plantations prefer ground burning instead of the more expensive and inconvenient mechanical approach to clear land using excavators and bulldozers. Indonesia’s Duta Palma is one the companies with the worst record in illegal burning, Varkke claims. And many political leaders largely remained silent or showed indifference when the smoke struck Singapore and Malaysia in June, with one party member telling Singapore to stop acting like a child.

Some state agencies, like the Indonesian Anti-Corruption Commission, work closely with a local NGO, Indonesia Corruption Watch, and are investigating a number of cases involving foreign companies and alleged illegal land clearing. But their efforts are stonewalled by the Indonesian courts. Instead of acting in defence of good governance, courts choose to protect the powerful in the industry in which they have vested interests. In 2010, an unnamed Malaysian-owned plantation was brought to court, but the case was stopped from continuing on to a higher court.

The intricate cross-border connections within the palm oil industry create an awkward situation and, more importantly, a crisis of good governance in Southeast Asia. With name-calling and scapegoating over the polluted haze, the governments of Indonesia, Malaysia and Singapore have engaged in a rhetorical exercise. In reality, all parties are skating around the real issues, discomforted over delving too deeply into the root of their shared problem.

This article is based on reports from RSF and Yale Global