Same-sex practices in Aceh traditionally were not seen in contradiction with local customs (adat) and religion. It is ironic that in Aceh today, homophobic political and religious officials voice opinions that would be more intelligible to the condescending Dutch colonizers than to Aceh’s elite circles a century ago.

On Thursday January 28, 2021, two men received 77 lashes each with a rattan cane in the Indonesian province of Aceh. They had been arrested in November after a raid on their apartment by a vigilante mob. Accused of having sex, they were handed over to the police. Under the province’s Sharia law regulations they were sentenced to be publicly flogged, an event that was watched by dozens in the capital’s Tamansari Park. Though Aceh is the only province in Indonesia that is allowed to have its own Sharia laws, anti-LGBT provisions have been promulgated in the bylaws of other provinces and municipalities as well.

This latest public flogging is not the first case where LGBT persons are targeted for prosecution in Indonesia’s most Western province, either by the moral police or by vigilante gangs. This was the third caning for homosexuality since Sharia law was implemented in 2015. Transgender people are also routinely targeted and in 2015 two women were detained because they were suspected of being lesbians, after they had been caught hugging in a public park.

Religious and political authorities have long incited hatred against members of the LGBT community. In 2012 for instance, Illiza Saaduddin, at the time the deputy mayor of the province’s capital, Banda Aceh, posted a picture of herself on Instagram holding a handgun with both hands, and declaring that LGBT people ruin the dignity of humankind. ‘We in Aceh’, she asserted, ‘hate them and fight against their behaviour which violates our customary norms and religion’. 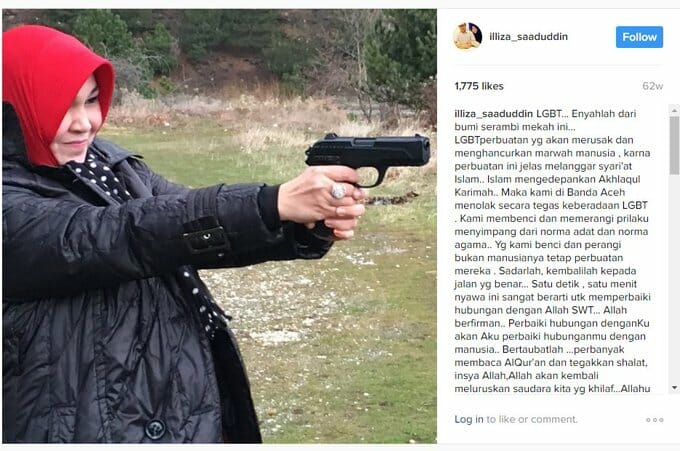 ‘We in Aceh’, she asserted, ‘hate them and fight against their behaviour which violates our customary norms and religion’

The jilbab Illiza being worn clearly is a recent invention, and so is the province’s homophobia

Customary norms? In her own portrait Illiza Saaduddin is not dressed in traditional Aceh women’s attire, but in a black, Western-style plastic raincoat, her head covered in a tight red jilbab, which so far protrudes from her face that she cannot look right or left without twisting her neck. Thus blinkered, she holds a very modern gun and in no way resembles Acehnese national heroine Cut Nyak Dien, who led the guerrilla war against the Dutch for 25 years. That war lasted from 1873 till 1904. Her portrait adorns the 10.000 rupiah note, her long hair tied in a top knot held together by a flowing ribbon. The jilbab Illiza being worn clearly is a recent invention, and so is the province’s homophobia.

Nineteenth and early twentieth century accounts of Acehnese culture by Dutch administrators and scientists are full of references to the so called ‘immorality’ of the Acehnese, both among the higher and the lower social groups. What shocked these observers most was the ‘shameless  openness’ in which these men flaunted their ‘depravities’. As Kruyt noted in 1875, boys from 9 to 12 years old, probably imported [read: raided] from the island of Nias, dressed in fine silks and adorned with golden and silver arm and leg bands, entertained men in the evenings and at night. These so called sedati were the private property of rich men; these might also share their slave boys with their male employees at the pepper plantations, who might engage with them in the ‘most unnatural and immoral acts’.

Every village had some sedati who performed poetry in the evening (pantun) and danced. They were owned by the male members of a so called kongsi. When an official (uleebalang) visited a village, the members of that particular kongsi rented sedati of other kongsi to entertain the guest.

The renowned Islamologist Snouck Hurgronje (1906), hated in Aceh because of his support for the Dutch military, also documented uleebalang, who were known to enjoy sexual relations with young male slaves from Nias. He mentioned that these sedati danced on festivals accompanied by religious poetry. Even religious leaders might have sedati, such as the Tekoe Panglima of the main mosque of  kampung Emperoen near Belang, who was also married to two wives, as Jacobs recorded. Praag (n.d.) stated that boys provided sexual services to men at the courts of the sultan. Apart from these crossdressing sedati, Jacobs also reported that boys might engage in ‘mutual masturbation’ a practice they might continue to enjoy after they were married.

As most observers of Aceh’s cultural and sexual norms were men, who had little interest in or access to the world of women, accounts of same-sex activities among women are rare. Yet the medical doctor Julius Jacobs noted in 1894 that tribadism, involving women with such ‘perverse’ sexual drives were not uncommon in the sultanate.

Traditionally, same-sex practices in Aceh were not seen in contradiction with local customs (adat) and religion

What we can learn from the above accounts is that crossdressing and same-sex activities were openly practised in Aceh, and that flaunting one’s beautiful boys was a source of pride for elite men. The sedati were held in high esteem, as performers and dancers, including at religious festivals. They were associated with the court and the mosques. The ones who despised such activities were not the Acehnese, but the foreign explorers and administrators, labelling them immoral and perverse. What the sedati themselves felt about their lives we don’t know, but that their masters valued them is clear. How the men who enjoyed them saw themselves we don’t know either, though the armchair anthropologist Karsch-Haack (1911) maintains that some of them were, in the terminology of those days, ‘congenital pederasts’.

Contrary to what Illiza Saaduddin claims, and what present day Sharia courts uphold, same-sex practices in Aceh traditionally were not seen in contradiction with local customs (adat) and religion. They were part of a rich cultural life that seems severely constrained under recent Sharia laws. It is ironic that present day homophobic political and religious officials in Aceh voice opinions that would be more intelligible to the condescending Dutch colonizers than to Aceh’s elite circles a century ago.

It is also remarkable that on the same occasion a mixed-sex couple received a far lighter sentence than the gay couple. They were caned 17 times each, for committing adultery. Yet in the Qur’an zina (adultery) is seen as a far greater offense than liwath (gay sex), as Kecia Ali demonstrates in his book ‘Sexual Ethics & Islam’.

On January 31 the EU strongly condemned the flogging. The union’s Spokesperson pointed out that ‘corporal punishment, in any form, is contrary to the prohibition of torture and other cruel, inhumane or degrading treatment or punishment, and cannot be considered a lawful sanction under international law. The European Union calls on Indonesia to honour its international obligations under the Convention Against Torture and other Cruel, Inhuman or Degrading Treatment or Punishment, ratified by Indonesia in 1998. The EU also emphasises that the rights of lesbian, gay, bisexual, transgender and intersex (LGBTI) persons are protected under existing international human rights law and relevant international conventions without discrimination’. So far however the Indonesian government has kept mum under these flagrant violations of international and national law.