A FORSEA-led Seminar on the Future of Rakhine

Much-awaited online seminar, 16 July 2020, on “What Future for Rakhine?: End Games for the Arakanese (Rakhine, Rohingyas and Other Co-habitants)”.

FORSEA joins hands with the School of Oriental and African Studies (SOAS: School of Interdisciplinary Studies), together with the Free Rohingya Coalition (FRC) in organising this much-awaited seminar on “What Future for Rakhine?: End Games for the Arakanese (Rakhine, Rohingyas and Other Co-habitants)”.

Be part of the Seminar Webinar or watch on Facebook – 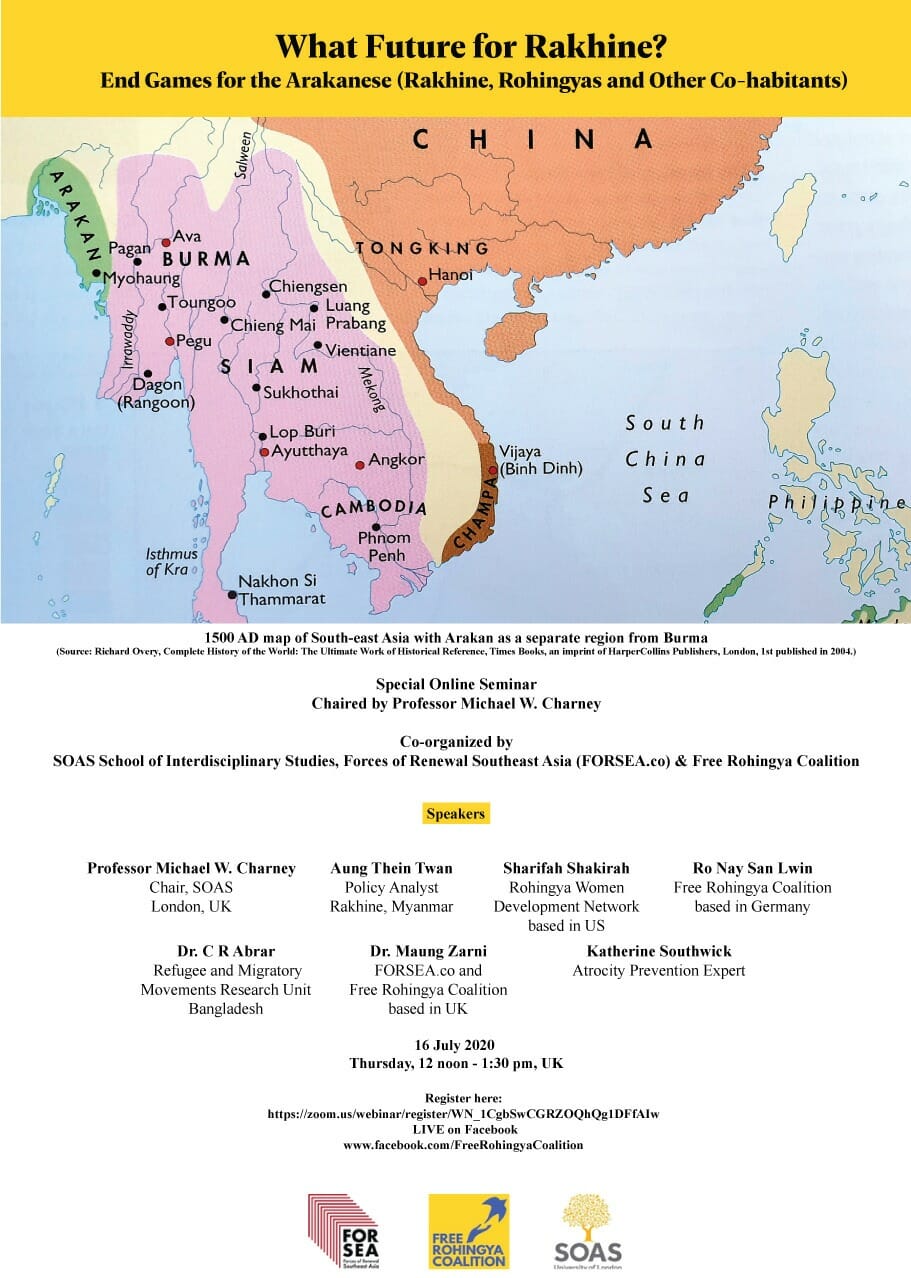 Through the prism of Myanmar’s internal colonialism and the triangular ethnic politics among the stakeholders – specifically, Rakhine, Rohingya and Myanmar – the online discussion will take a hard look at the ongoing and foundational issues of Rakhines’ revived armed revolt against Myanmar’s colonisation of the formerly independent Kingdom of Arakan/Rakhine and the ongoing genocidal persecution of the region’s Rohingya minority. The forum brings together a group of leading policy analysts, activists and scholars including Rohingyas and Rakhine who monitor and/or are directly involved in Rakhine affairs. The discussions will touch on the status of the genocide of Rohingyas, the limitations of international law and accountability mechanisms (such as ICJ and ICC); the roles and policies of the most affected neighbouring state of Bangladesh; and the possibilities for reconciliation between Rakhine’s two largest co-habiting ethnic communities, namely Rakhine majority and Rohingya minority.

Since independence, Rakhine (or Arakan) has been beset with strife directly resulting from the triangular politics among the Rakhine Buddhists with their bases in central parts of Rakhine (Sittwe, Mrauk-U, etc.), predominantly Muslim Rohingyas with their homeland of Northern Rakhine along the Bangladeshi borders, and the central government in Yangon (and since 2006 Naypyidaw). Rakhine is one of Myanmar’s most strategic border regions saddled along Bangladesh-Myanmar border, which spans 270 miles of land, waterways and sea.  This strategic region is rich in hydrocarbons and other minerals, and has extremely fertile agricultural land, making it a magnet for foreign investment from Asian and western investors. On the eve of Myanmar’s independence from Britain on the 4th of January in 1948, the central government troops were fighting on two fronts in Rakhine – against Rohingya and Rakhine ethnic blocs, both armed with the left-over WWII weapons from British and Japanese troops.

On one hand, the Myanmar troops fought Rakhine nationalists whose aim was to restore their sovereignty which they lost when their ancient and cosmopolitan coastal kingdom fell to the invading Myanmar army in December 1784. Meanwhile, on the other hand, the Myanmar military also had to contend with the Rohingya armed revolt organized by a section of Rohingyas with bi-cultural and bi-demographic ties to Bengali community in the adjacent border province of Chittagong, in the then East Pakistan (and since 1971 the Republic of Bangladesh).  Like its ideological heir of the pre-independence days, the Arakan Army (of Rakhine Buddhists), Rakhine nationalists at the time sought self-determination in the form of an independent Rakhine state, opting out of the soon-to-be independent Myanmar.  The Rohingya who waged armed insurrections under the banner of Mujahideen aimed to join their pre-dominantly Muslim and Rohingya region of Northern Rakhine with East Pakistan.  While the central government was able to put out the early fires of self-determination on the Rakhine front in Myanmar’s formative days, successive generations of Myanmar politicians and military leaders have adopted what in effect is a colonial policy of divide and rule in dealing with the triangular politics in Rakhine state.

Opinions expressed in this article do not necessarily reflect FORSEA’s editorial stance.

Be part of the Seminar Webinar or watch on Facebook –