NextWarnings from the Balkans, again! Denials of Bosnian Genocide, Prospects for Bosnia’s Disintegration and Great Powers in a Small Playground
FeaturedMultimediaOpinion

An Islamic Perspective on the Sacred Balance of Humanity, Animals and Nature: An Overview of “Ecolibrium”

“Ecolibrium: The Sacred Balance in Islam” is a book that focuses on the plight of humanity, animals and nature. It seeks to address the causes of ecological, environmental and developmental degradation utilizing three groups of main sources: empirical evidence from nature and history, the Quran and authentic Hadith, and logical inferences.

The prime focus of Ecolibrium on the Quran and environmental/ecological welfare, where in so doing, it presents the precepts and applications of a totally rational belief system where the distinction between religion and secularism is shown to be utterly meaningless. It is demonstrated that the optimal solution to our mounting socio-environmental problems is achievable if only we were to return to an integrated way of thinking and living, of indeed organizing human society, so that it organically co-evolves as a natural component of the panoply of the rest of creation.

The book comprises nine chapters: 1:  The Etiology of Devastation ; 2: The Foundations of Animal and Ecological Rights; 3: The Islamic View of Nature; 4: The Use of Nature 5: The Islamic view of the Animal Kingdom; 6:  Animal Afterlife; 7:  Equi-nomics: “Equi-nomics: The Optimally Balanced Economic System for Humanity and Nature”;  8: The Overpopulation Myth and  9: A Worldview Founded on Nature.

Briefly, Chapter 1 opens up our thinking to socio-environmental concerns and sets the stage, asking questions about nature and its purpose and then delves into what has mired us to suffer the odious quagmire of environmental destruction – the etiological nexus. Chapter 2 establishes, using nature itself, the foundations of its rights. The next few chapters provide an integral and global solution for local and global issues covering a number of areas with respect the environment and animals such as: economics, animal welfare, animal communication and intelligence, the use and development of technology, neglected areas of history of science, the history of human development in relation to the purpose and goals enunciated in the Quran, theodicy etc. In the ninth and final chapter, having equipped the readers with the knowledge of Islam and its approach to nature, we further discuss how and why it is that Islam, as described in Ecolibrium, is the tragically most misunderstood belief system! We show that it is really a belief system founded on nature itself, whose principles can greatly mitigate our multifarious interconnected problems, if not totally resolve them.

The main concepts discussed are as follows: Islam is regarded in the Quran (its primary textual source) as a natural belief system founded on nature (in Arabic: fitrah). Furthermore, in the Quran, nature is spoken of profusely, not only as a pointer to God (a singular non-anthropomorphic ‘non-localized entity’), but also as a source of sustainability for all creatures that inhabit this vast universe. To this extent, Ecolibrium shows that the Quranic system does not separate the ‘religious’ from the ‘sacred’, for everything is sacred in the sense of honouring and respecting it as the creation of God. What is more is that the Quran is centralized on the concept of al-mizan (the Arabic word for ‘the balance/equilibrium’). 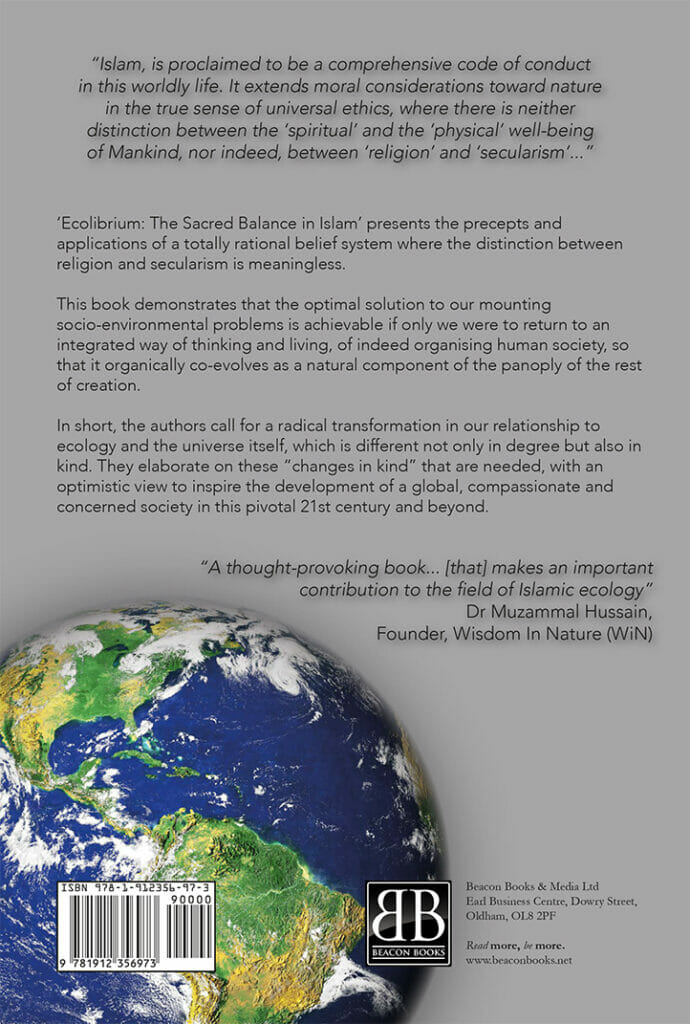 The book illustrates that this key concept is essential to realizing the Equigenic Principle as a corrective for destructive human behaviour that is creating havoc on the Earth. The Equigenic Principle is defined and is illustrated to be the fulcrum for three other ‘ecognitions’ (ecological recognitions): ‘Ownership of God’, ‘Sentient Species Communities’ and ‘Personhood’. In addition, it is also shown that a proper understanding of ‘consciousness’ and also directed macroevolution is governed astonishingly by a single word Arabic: Rabb. Recognition of this reality, we claim, helps to integrally tie together all creation into a supra community that then naturally has affinity. In fact, the concept of affinity and the four ecognitions (in particular the Equigenic Principle) are the basis for restructuring a human relationship with the cosmos that leads to both justice and peace – in other words Ecolibrium: the sacred balance in Islam, the book’s title.

The book is written in a way that is intrinsically reminiscent of the Quranic style – it cannot be pigeonholed into the human-made artificial categories of the religious, scientific, philosophical, spiritual, or motivational, but rather, Ecolibrium combines all these concepts in various degrees as part of integral knowledge. In other words, this book presents what could be termed the Quranic Paradigm. In a nutshell, its thrust is the crucial transformation of our relationship to ecology and the universe. This relationship, it is argued, has to be different not only in degree, but also in kind. We elaborate on the “changes in kind” that are needed, with an optimistic view to inspire the vital development of a global, compassionate and concerned society in this pivotal 21st century and beyond, free from any aggression or coercion, but beckoning and imploring holistic ratiocination.

Reviewed by Nadeem Haque
Opinions expressed in our FORSEA commentaries and essays are those of the authors, and do not necessarily reflect our FORSEA board or the editor. 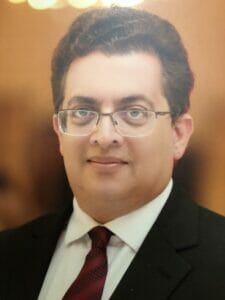 Nadeem Haque is a thinker on numerous interrelated areas that connect with Islam. His work thus far has focused on eight main areas: animal rights and environment/ecology; the origins and nature of consciousness; the unification of physics; macro-evolution; the history of science; Quran and science/history correlations; theology and epistemology.  He has also written novellas in the extremely rare genre of Islamic/philosophical science fiction and futurism. His most recent book is the co-authored: Ecolibrium: The Sacred Balance in Islam (Beacon Books, 2021).  Nadeem was the co-founder of the King’s College Islamic Society at the University of London (in 1985), and is also one of the founders of the Institute of Higher Reasoning (IHR) which is an educational, research and think tank organization. He is the grandson of the late Al- Hafiz B.A. Masri, who is internationally known as the pioneer of Animals and Islam theological research. Nadeem and his colleagues were instrumental in holding the lectures on Embryology and the Quran (Keith Moore, Marshall Johnson and Persaud) at the University of Toronto in the late 1980s. Besides his academic/research work and interests, Nadeem is a registered professional practicing engineer (asset management, civil/structural and environmental) in Ontario, with a degree from King’s College London in Civil Engineering and a degree in Economics from the University of Toronto.