Amitabh Pal, the American-educated Indian journalist offered his incisive analysis of the ideological pillars on which rests the toxic mix of Hindutva or Hindu nationalism and right-wing populism of the government of Prime Minister Narendra Modi.

FORSEA’s YouTube LIVE distinguished guest, Amitabh Pal, former Managing Editor of The Progressive, a premier publication based in Madison, Wisconsin, USA and Communications Officer with the Freedom From Religion Foundation in USA, speaking on the “Dialogue on Democratic Struggles across Asia Series” with Muang Zarni. 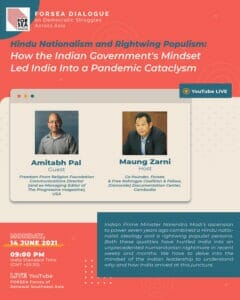 The American-educated Indian journalist offered his incisive analysis of the ideological pillars on which rests the toxic mix of Hindutva or Hindu nationalism and Rightwing populism of the government of Prime Minister Narendra Modi. After grounding his analysis in the history of Hindutva’s organizational formation such as the establishment of the Rashtriya Swayamsevak Sangh or Rashtriya Seva Sangha (RSS), (Hindi: “National Volunteer Organization”) in 1925. According to the Encyclopaedia Britannica, it was formed “as a disciplined cadre consisting mostly of upper-caste Brahmins who were dedicated to independence (from the British rule) and the protection of Hindu political, cultural, and religious interests”. Its creation was triggered by rioting between Hindus and Muslims.

Pal discussed how Modi and the ruling BJP have adapted the colonial-era Hindu nationalist paramilitary organization and its ideological mainstay to the present-day electoral politics of India ala the brand of populist ring wing politics which Brazilian strongman and ex-parachuter Bolsonaro and the ex-US President Donald Trump come to personify in Latin and N. American context.

He pointed out the parallel ways in which Bolsonaro and Trump mishandled the COVID-19 pandemic in their respective countries and Modi and the ruling BJP placed their narrow-party interests. For instance, organizing election campaigns which turned out to be “super-spreader” mass events.

Perhaps equally, or more disturbing, is that Modi had not suffered any appreciable approval rating among his Hindutva base, despite his catastrophic leadership in addressing the country’s largest public health catastrophe in India’s modern history. Like Trump, Modi sharked his national responsibility as the leader and invoked the disingenuous discourse of “local” or federalized responsibility. That is, whatever the failures in public health system responses it is the local or provincial authorities who are responsible for their regions’ failures, observed Pal.

Beyond the public health catastrophe, one of Hindutva’s main concerns is to protect “Hindu-ness” and Hindu interests in the face of what it considers threats from the two alien religions, Christianity and Muslims while treating other India-born Janism, Sikhism and Buddhism as minor companions in Hinduism, a polytheistic faith.

The dialogue also touched on the nationwide Indian farmers’ protests against Modi’s attempts to impose pro-corporate agricultural policies stripping bare the Hindu nationalism of its upper and corporate class character.

Unlike Bolsanaro and Trump’s brands of brazen misogyny, Pal pointed out that Modi, an unmarried PM, is a lot shrewder in that he outsources such machismo to BJP operatives.

Finally, the dialogue also touched on some of the most influential intellectual forefathers of Hindutva the likes of whom include Sri Aurobindo, the late 19th century Cambridge-educated Indian philosopher and yogi, who returned to India from Britain where he spent all his formative years since the age of 7 in order to become a violent revolutionary, and Swami Vivekananda, another late 19th century Hindutva ideologue.