NextWhy is Japan NOT standing up for human rights and justice across Asia?
FeaturedMultimedia

The former Burmese refugee educated in Korea Dr Maung Zaw of Thabyay Institute in Yangon and FORSEA co-founder and UK-based Burmese exile Dr Maung Zarni spoke on Myanmar’s worsening political repression and violence on the 100th day of the military coup at the YouTube LIVE forum entitled “Peace and Human Rights in Myanmar” hosted by Yonsei University in Seoul. 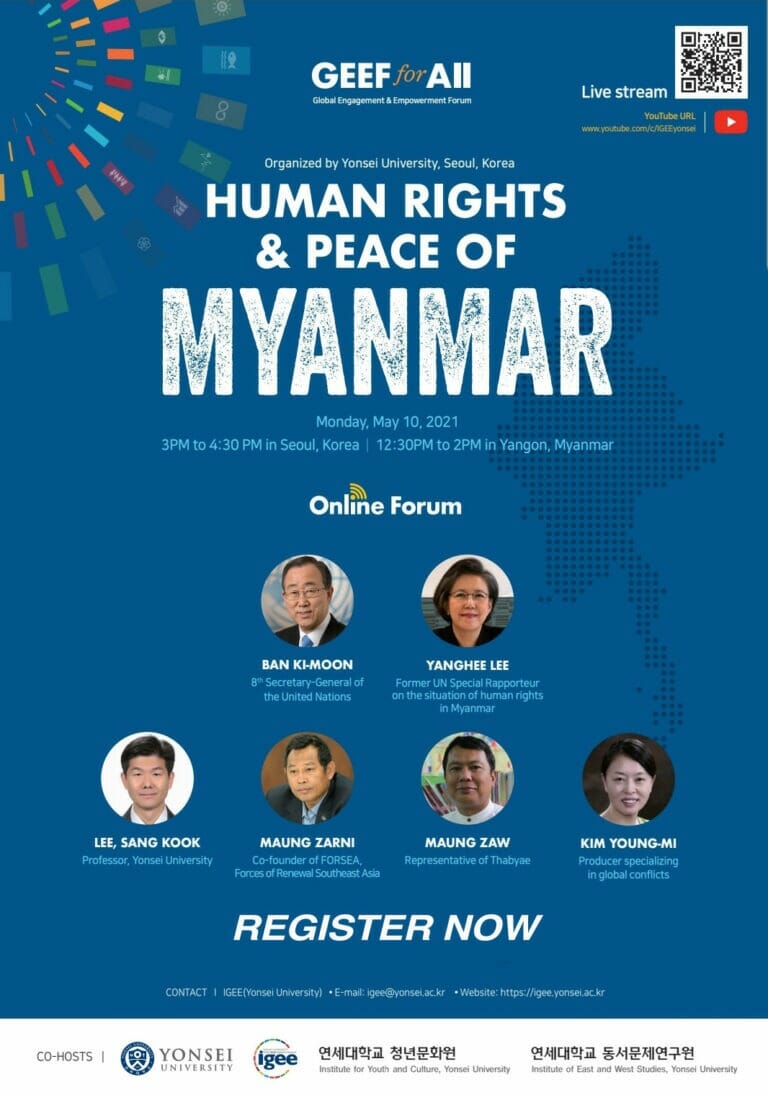 In his opening remarks – comprehensive in scope and grounded in his first-hand experience of dealing with the senior most leaders of the Burmese military regime, including the retired dictator Senior General Than Shwe – the Right Honourable Ban Ki-Moon pushed for the multi-layered and multilateral approach in dealing with the unfolding violent political crisis triggered by the February military coup by the State Administration Council (SAC). The former Secretary General who travelled to Myanmar during the devastating Cyclone Nargis and successfully pushed for the opening for humanitarian assistance with the intransigent military regime in 2008 said, “I condemned the violence in the strongest terms”, referring to the Burmese military’s terroristic murder of innocent civilians. He lamented the failure of the United Nations to come together with a unified stance on Myanmar’s troubling situation owing to the privileging of “geopolitical interests” above well-being and sufferings of the Burmese people.

Professor Yanghee Lee delivered the keynote address, providing a brief historical overview of the birth of the Union of Burma while focusing on the last half-century of waves of suffering and repression by the Burmese military. Her Strategic Advisory Council – Myanmar publicly issued a statement, characterising the coup regime led by Min Aung Hlaing as “little more than terrorist armed gang”, looting, murdering, vandalising, kidnapping, torturing and jailing citizens day and night with the blanket impunity.

Former UN Special Rapporteur pointedly noted how POSCO, a South Korean steel corporation, has financed the murderous regime, providing over $200 million in the midst of the genocidal killings of Rohingya Muslims in 2017 and building its largest ever naval vessel built on commission from the Myanmar terrorist military. She called for a global arms embargo and the cutting of the revenue flow into Myanmar military’s two conglomerates, Myanmar Economic Holding Limited and Myanmar Economic Corporation, as well as Myanmar Gas and Oil Enterprise, all major revenue earners for the Burmese military.

In a clear message, she urged the international states and organisations not to accept the SAC terrorist group as the representative of Myanmar and instead called on the international community to recognise and work with the National Unity Government as the popularly mandated interim government representing peoples – note the plural – of Myanmar.

In her videotaped presentation, Young-mi Kim, the noted Korean war correspondent and producer, introduced the three leading leaders of the Nwe Oo Revolution – WaI Moe Naing of Monywa, Ei Thinzar Maung of Yangon and Dr Tayzar San of Mandalay. In the middle of April, 2021, Wai Moe Naing was arrested – now facing a death sentence – after having been tortured in interrogation. Ms Kim noted that while many other murderous regimes typically conceal or erase evidence of their crimes, Myanmar’s military broadcasts pictures of tortured dissidents in detention – usually young men and women – to instil deep fear in the population of 54-millions.

The Korean journalist also dissected the effective ways in which protest movements have been organised and sustained for the last three months while touching on specific cultural forms of popular resistance by average citizens such as banging pots and pans (or hanging women’s garments as a potential deterrence against security troops who are superstitious about walking under these women’s clotheslines). She emphatically urged global civil society to offer Myanmar’s inspirational resistance movement concrete support and solidarity as the latter’s struggle against the murderous regime, one far worse than what she has reported on in other parts of the world.

Speaking as the representative of Thabyay, a civil society educational organisation that focuses on training thousands of Myanmar’s younger generation, Dr Maung Zaw delivered his videotaped address in fluent Korean. He drove home the message that Myanmar people have succeeded in forming a broad-based united resistance against the military regime that has been killing and terrorising the people of Myanmar. As a former Burmese political refugee, Dr Zaw expressed the support and solidarity which Korean people have extended to Myanmar’s democratic struggles.

On his part, FORSEA co-founder Dr Maung Zarni called the State Administrative Council and its main instrument of terror, the Tatmadaw or national armed forces, “the cancer in the national life”. He echoed the popular experiential view on the ground among the Myanmar people when he framed the Tatmadaw as the existential threat to the country and her future.

Additionally, Maung Zarni amplified the Burmese peoples’ call to see the situation of Myanmar since February coup as one of “Fascist-terrorist-mafia” occupation: in the eyes of the Burmese public, their national armed forces have committed multiple international crimes against diverse ethnic and religious communities. It has committed a full-blown genocide against Rohingyas while having waged internally colonialist ethnic wars against non-Rohingya national minorities such as Karen, Kachin, Shan, Chin, Mon, Ta’ang, and so forth. Now it is committing crimes against humanity against the ethnic majoritarian Burmese Buddhist public.

As the result, the historically divided multi-ethnic society in Myanmar has forged an unprecedented united front to remove the cancer – not simply for reversal of the February coup but to remove the cancer, that is, to fight by any means necessary and defeat the occupying Burmese military as a whole.

He emphasized that Myanmar is undergoing a textbook revolutionary process – a zero sum war against the repressive national military, with great uncertainty and much blood-shed and called on the Korean civil society to persuade Korean corporations and government to use their economic leverage against the Myanmar regime. He echoed Professor Yanghee Lee’s call for cutting off financial flow to Myanmar’s terrorist regime and, conversely, recognise and support the National Unity Government.