The worst drought season in a century, endless damming, ongoing climate change, and the harm of millions subsisting on a seasonal sea have all strained Tonle Sap to breaking.

In July the Mekong River, the precious lifeline for four Southeast Asian countries and China’s Yunnan Province, fell to its lowest levels in 100 years, the victim of increasing climate change, agricultural runoff and a plethora of upstream dams that threaten its existence.

The rains have finally come, but the worst casualties of a tamed Mekong are due for Cambodia’s 125-km-long Tonle Sap Lake, where life above and below the water relies on the flood pulse of the river. Now more than ever, experts are wondering how much pulse is left.

“Traditionally the annual reversal of the Tonle Sap Lake happens in late July or early August, but with this year’s drought, the reversal will come late or perhaps not at all,” said Brian Eyler, the Energy, Water, Sustainability Program Director for the Washington, DC-based Stimson Center. When the Mekong floods, it reverses the flow of the river and puts 11,000 to 16,000 sq km underwater, producing one of the most intense seasonal changes in the world. The reversal transforms the map from Phnom Penh to Siem Reap and supports globally important colonies of endangered waterbirds and giant snakehead fish alike — as well as the millions who rely on its bounty.

“I predict a lower fish catch this year than last year — how much lower is unknown and depends on many complicated factors,” Eyler said. “But if the reversal were not to happen, then not only would this year’s fish catch be stunted, but the entire ecosystem of the Tonle Sap will be put in jeopardy, possibly gravely reducing fish catches into perpetuity.”

The capricious flow of the Mekong has always affected the wildlife and people of Tonle Sap, and now some are wondering how long the people — including hundreds of thousands of Vietnamese — can survive in the doomed floodplain.

“It’s all about the flood pulse,” said Taber Hand of Wetlands Work!, a social enterprise that designs and builds innovative treatment systems and promotes wetlands awareness. “The monsoon-driven flood pulse makes the Tonle Sap the most complex hydro-ecological system in the world and, by far, the most productive freshwater fishery in the world.” The result of that seven- to eight-meter rise in the water is the most important freshwater fishery in Southeast Asia. More than 1,000 species of fish have adapted to this unique floodplain ecosystem.

“No other country on the planet has this scale of an economically free source of fish, perhaps sufficient for 60 to 75 percent of all national dietary needs in protein and fat,” Hand said. “All this is dependent on the size and timing of the Mekong River’s flood pulse.”

The lake’s footprint expands up to six times in surface area. That water carries sediment, organic material, and fish eggs and larvae to a safe, nutrient-rich habitat of the floodplains, creating an explosion of life. Well over 250,000 tonnes of fish in the Tonle Sap and 2.6 million tonnes are in the Mekong system, according to Eyler at the Stimson Center.

“Those fish leave the Tonle Sap and migrate to all parts of the Mekong system, some travel thousands of miles to spawning grounds,” Eyler said. “This annual heartbeat of the Tonle Sap is really what makes the Mekong mighty.”

Before it reaches Cambodia; most of the water that feeds the Lower Mekong comes from the mountains of Laos. One of the major man-made impediments to the water levels are the dams that have sprung up upriver, many of them part of wider Chinese infrastructure projects in Southeast Asia. The most recent high-profile potential project on the Mekong mainstem is the Sambor Dam in Cambodia’s Kratie province. Scientists and Fishery Administration officials say it would have disastrous consequences for the fishery environment and perhaps a million dependent livelihoods.

Most voracious for dam projects is Laos, which hopes to be the “Battery of Asia.” As Asia Sentinel reported in a three-part series in 2018, Laos had 46 operational hydroelectric projects and 54 more under construction. With Cambodia’s appetite for Chinese investment and little control over what happens upstream, there is little hope that this particular man-made cause of Tonle Sap’s woes will abate.

However, some of the man-made disasters that is the current state of the Mekong comes down to climate change, weather authorities say. The taps to the Mekong aren’t just turned on and off by the hydropower dams; the shorter, unpredictable monsoon seasons contribute to the low waters, too.

“I have no doubt that this present drought is caused by the shift in world weather patterns as the result of global change, especially warming trends, and it would not be surprising if it lasted several more years,” Peter Moyle, a biology professor emeritus at the University of California, told National Geographic last month.

“Whoever or whatever controls the Mekong flood pulse — be it a flukey climate’s rainfall, hydro-power energy consumption for traditional urban development, or its use as a strategic political tool — controls the fisheries, the sediments that maintain river banks, and the freshwater pushback of saline intrusion for agriculture in the Delta,” Hand said. “In a nutshell, the substantive diminishment of the Mekong flood pulse threatens the national food security of Cambodia and Vietnam, and the livelihood of millions of rural people.”

Along with the colonial nesting bird species and snakehead fish, the changing Tonle Sap is of great concern to the people on the floodplain edges and floating villages. They are some of Cambodia’s most vulnerable residents.

Many of the lake’s residents have little choice but to live off the dying fishery. Illegal fishing is large-scale and desperate, with locals journeying into prohibited areas at night for better catches. A Kampong Chhnang illegal fishing crackdown earlier this week yielded 1,580 meters of nets and 47 large fishing traps. 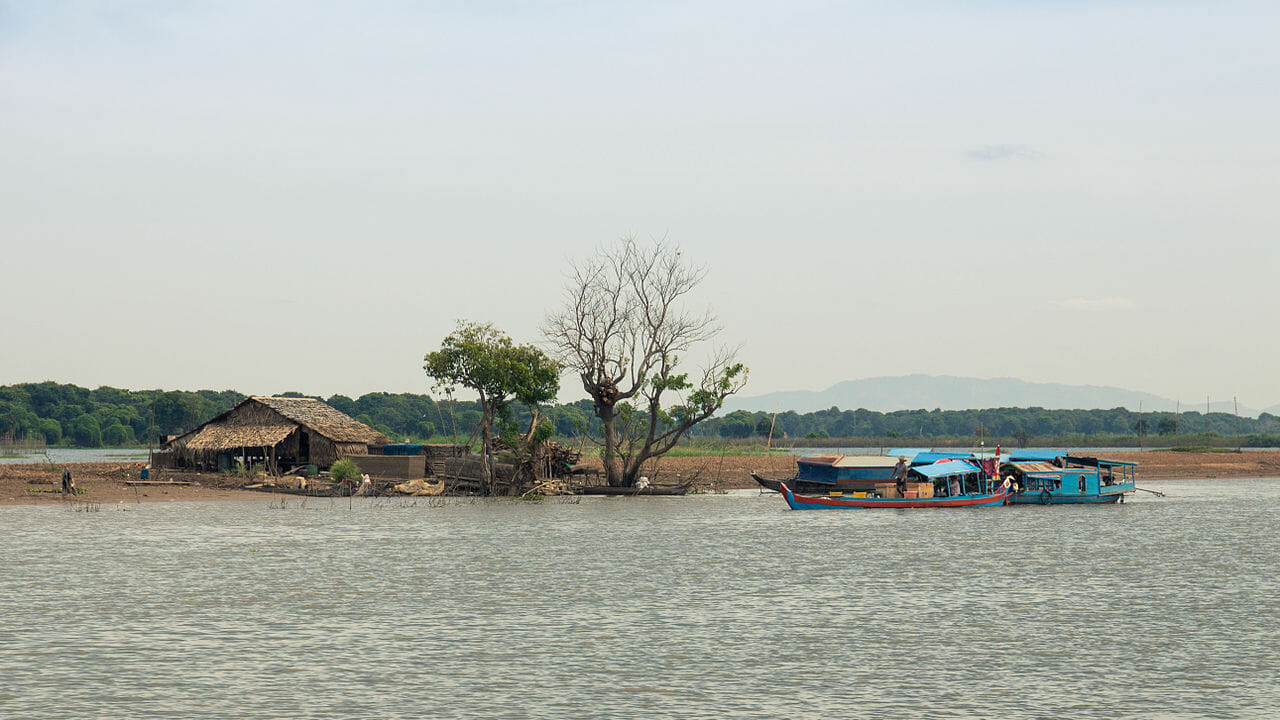 More than 90,000 people live on the floating cities of Tonle Sap, and 1.1 million live on the floodplain between national roads five and six. The most vulnerable people on this Cambodia lake are not, in some respects, even Cambodian. Visitors to this region are often surprised to find themselves in the floating villages of Tonle Sap hundreds of miles from the Mekong Delta and hear Vietnamese rather than Khmer. During America’s war in Vietnam, thousands of Vietnamese fled to Cambodia, and many thousands more would follow in the wake of the fall of the Khmer Rouge during Vietnam’s 10-year occupancy of Cambodia. There are estimated to be as many as 700,000 ethnic Vietnamese in Cambodia, and most of them are said to live on Tonle Sap’s floodplain and floating villages. This seasonal lake is the land of the stateless. They have little recourse with the state, and less so with the worsening ecology of the lake.

Coupled with the decreased fisheries, the government is attempting to move the Vietnamese off the lake and onto the floodplain and upland. Efforts were made earlier this year to remove Vietnamese families from the floating villages of Tonle Sap to higher ground; but after less than a month many remain on the floodplain and have not moved back to their former floating villages around Chhnok Tru at the south end of the lake, citing poor conditions. With hope diminishing for the fishery of Tonle Sap, many are removing themselves, repatriating to Vietnam, a country they may not know.

Further afield from the Lake are five provincial capital cities along agricultural watersheds that empty into the lake. “During the low water season, the input of nutrients and chemicals from agriculture and the cities’ sewage consume oxygen in the water and that kills most aquatic life, including fish and fish larvae,” Hand says.

While Hand believes that the lack of a Mekong pulse for the Tonle Sap is unlikely at the moment, Eyler thinks it is a possibility. “It’s certainly possible and not alarmist but rather something that must be watched. People in Cambodia who watch the reversal and other Mekong watchers have predicted this outcome for years.”

The worst drought season in a century, endless damming, ongoing climate change, and the harm of millions subsisting on a seasonal sea have all strained Tonle Sap to breaking. The fisheries may not recover for decades, perhaps not ever.

Tyler Roney is a Bangkok-based journalist.