NextThe Dark Horse in the Race: Muhyiddin Yassin and the Rise of ‘Old Malaysia’
FeaturedOpinion

Can Thailand Recover from Persistent Dictatorship?

Thailand was once the hope of democracy in Southeast Asia. Two coups and two constitutions later and opposition nearly suppressed into extinction, the Bangkok elite have dragged Thailand back to something akin to absolutism. Is there any chance for democracy in Thailand? There are indications in Thailand’s Northeast, or Isaan, that networks may be able to come together in a progressive alliance.

For some 25 years following the fall of the Soviet Union, it appeared that liberal democracy might come to predominate in the world. The early days of the Arab Spring threatened age-old dictatorships. The rise of liberal democracy and its component parts–human rights, freedom of the press, free and fair elections, local empowerment, respect of diversity–seemed to promise a more just and progressive future for people all over the world.

Thailand was something of a poster child for what was possible in transforming the status quo in Southeast Asia. Little by little, a true democracy seemed to be emerging. The consultative process used for the 1997 constitution resulted in the country’s most democratic to date. It recognized a long list of rights, created semi-autonomous bodies to ensure rights and accountability of elected officials, and stipulated fully elected representatives in both houses of parliament.

The constitution and the appearance of real policy-driven political parties threatened the long chokehold the Bangkok elite had kept on Thai politics. The elite backed the “good coup” of 2006 that aimed to reset the rules of the game in its favor in a new constitution. The 2007 constitution could not hold back the demoratic forces in Thai society, and so another coup tried to reset the rules of the game again, by five years of a suppressive military dictatorship that sought to definitively break the back of those fighting for democracy.

The image of Thailand as Southeast Asian’s most vibrant democracy was shattered as it slouched into line with the region’s other undemocratic regimes such as Laos or Vietnam. Many Thais joked bitterly that compared to Thailand, even Myanmar seemed more democratic.

Suppression was felt in Thailand’s Northeast the most. In both formal and informal ways, thousands were monitored, threatened, arrested, jailed, or subjected to “attitude adjustment” reeducation sessions. The suppression successfully squelched any opposition (or even debate) to the quite authoritarian 2017 constitution which among other things created an all-appointed senate dominated by the military.

But the Bangkok elite also made sure that it could manipulate the March 2019 elections in its favor. The Election Commission and Constitutional Court, two bodies stacked by the military, dissolved the Thai Raksa Chat Party on specious grounds before the election, thus knocking out what might have been the second or third largest pro-democracy party.

The second most popular party in the Northeast from the election was the Future Forward Party which promoted revision of the authoritarian constitution, opposed the role of the military, and consistently challenged the old elite. Its surprising third-place success in the election and the progressiveness of its policies, naturally, doomed it. It was dissolved by the Constitutional Court last month.

Northeasterners have taken quite a beating. Four of the political parties they had supported in the past 14 years have been dissolved by the court. Four of the prime ministers the Northeast had helped bring to the premiership were removed–two by court order and two by military coups.

The bulwark of democracy

The Northeast has gained a reputation by many as having the most politically conscious electorate. Despite the pervasive poverty of the region, it is also the most populous, representing a third of the country. The majority in the Northeast have served as a bulwark of democracy in Thailand while, ironically perhaps, the better “educated” Bangkok elite and middle class have come down clearly on the side of authoritarianism. It is the Northeast that elected socialist members to parliament in the 1950s. The Northeast served as one of the bases of the Communist Party of Thailand in the 1960s and 1970s. The Northeast served as the heart of the Assembly of the Poor, in the 1990s, and it was one of strongholds of the democratic Red Shirts from 2009 to the present. 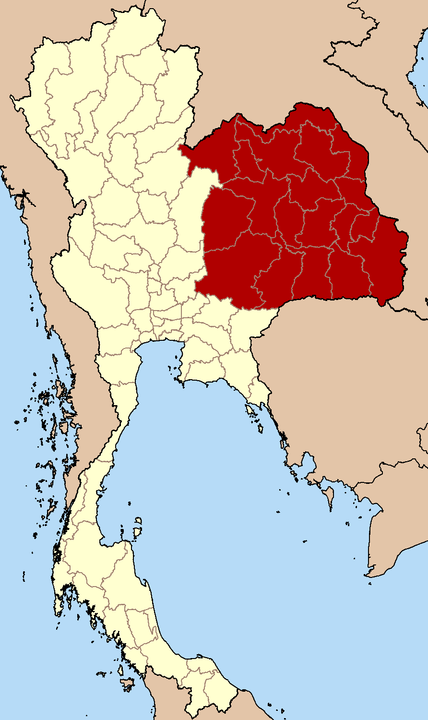 The Northeastern Region in Thailand (in red), also known as Isaan, is Thailand’s largest and most populous region.

The Northeast is also home to the invisible ethnic group–more than 75 percent of the population still speak their own Lao language. They are increasingly embracing their Lao-ness and there are more and more frequent calls for greater autonomy, given the apparent unlikelihood that their political aspirations can be found in Bangkok.

To many, it appeared that civil society in the Northeast had been broken, eviscerated, and crushed by years of dictatorship that in turn had created petty infighting and division.

But there are signs of change. The principal online publication of the region, The Isaan Record, has recently seen its number of followers, made up primarily of the new generation, skyrocket to 40,000.

The moribund Northeast branch of the Student Federation of Thailand is being revived by recent efforts to bring activist students from many of the region’s universities. When the Future Forward Party was dissolved last month, flash mobs of students erupted throughout the region.

There are also stirrings among women, LGBTQI groups, alternative education proponents, and media groups, all in an effort to form a larger progressive alliance bound by a shared commitment to democracy, constitutional revision, human rights, and local autonomy.

If a viable and vibrant democratic movement might come about in the Northeast, perhaps it could pose as a model for other regions who together can arrest Thailand’s backsliding into even deeper authoritarian and unite with progressive forces in Bangkok to challenge and transform Thailand’s political system.

It is about time for progressive forces to overcome divisions, focus on their common goals, and wake Thailand out of its never-ending nightmare of dictatorship.

David Streckfuss
David Streckfuss is an independent scholar based in the Northeast of Thailand. He has written for publications such as the New York Times, Aljazeera, Asian Nikkei Review, and the Wall Street Journal. His book, Truth on Trial in Thailand: defamation, rebellion, and lèse-majesté , is currently being translated.