NextHow Racist is your Engagement with Burma Studies?
FeaturedOpinion

Engaging with State Power, without Losing Principles or Head · Part 2

“In those years, the Burma policy world was caught in the emerging Orwellian duality of ‘Sanctions Bad, Engagement Good’ of international debates which took place with respective proponents talking past one another, pursuing their own concealed interests.” Read Essay 2 from Maung Zarni in the new FORSEA Democratic Struggle Series.

Whenever she was asked about her views on Western sanctions against Burma, the then iconic opposition leader, Aung San Suu Kyi, typically told the international media that sanctions were what western governments deemed appropriate for the military regime’s gross human rights violations and political repression.

According to an American Burma lobbyist in Washington DC, Suu Kyi however, was in private communications with some of her staunchest supporters in Washington, specifically Mitch McConnell, the Republican Senator from US southern state of Kentucky, who chaired the influential Senate Sub-Committee on Appropriations, during the George W. Bush Jr Administration. The lobbyist was privy to these communications between Suu Kyi and the Senator. NLD leader was, I was told, involved in formulating the details of the second US sanctions legislation of 2003, which would come to bite the country’s nascent textile and apparel industry, one of the biggest employers after the Armed Forces and other state sectors.

Some of the Burmese democrats – some, former political prisoners who served as aides (for instance, the writer and artist Ma Theingi) to Ms Suu Kyi during her early months as a co-founder of the National League for Democracy – privately and openly began to question Suu Kyi’s wisdom about the sanctions. In their views from the ground, their former leader’s blanket endorsement of the non-targeted US sanctions, while allowing ‘Big Oil’ to pursue its Burma interests unimpeded, would literally put out of work thousands of local garment factory workers (mostly woman), should the Asian investors in the garment industry make their exit.

On their part, the Burmese military strategists, who ironically saw a morally weak logic for expanding US and other western sanction regimes against them, the military intelligence services under General Khin Nyunt reached out to dissidents and former dissidents at home and abroad in order to weaken or stop the new wave of US sanctions.

The spooks’ typical argument would go something like, “the shrinking garment industry with its high percentage of female Burmese employees would put thousands of them – often sole bread-winners for their extended families – out of work, and into prostitution and other unsavoury lines of work on the streets in Yangon.” The argument continued, “the generals, who had begun to amass their ill-gotten gains from the sales of Myanmar’s natural resources which they safely laundered and stashed away in banks in Singapore, Thailand, Malaysia and so on, would do just fine.”

Since the military’s Burma was fast-tracked as a new member into the Association of Southeast Asian Nations (ASEAN) in 1997, “Constructive Engagement” was offered aggressively, as an alternative to the Western sanctions, by the top ASEAN leaders such as Malaysian PM, Dr Mahathir, and Singapore’s, Lee Kuan Yew. Both Singapore and Malaysia saw and seized a great economic opportunity in the military-ruled Burma, then considered one of the last economic frontiers of Asia.

This was the decision that Dr Mahathir, years later regretted, as evidenced in his video-taped remark on Myanmar’s slow genocide of Muslim Rohingya which was made specially for the Oslo Conference on the subject, in 2015.

The banks of Singapore (with its reputation as the Switzerland of the East), became a financial haven for the Burmese generals, Myanmar arms-dealers such as the army-bred crony, Tay Za, and big-time narcotic dealers. Whatever the role of Singapore’s banks, and their mitigating role in shielding the Burmese military regime from western financial sanctions, Singaporean officials typically brushed aside, with feigned politeness, one veteran US State Department official (with years of dealing with the city-state on Burma affairs) recounted to me. (As of 2021, in addition to OCBC of Singaporean, Mizuko and Sumitomo of Japan and ICBC of China are 3 top bankers for Myanmar military, according to Justice for Myanmar economic research group.)

Besides, Mr Lee was providing the Myanmar military leadership with strategic advice on how to make the dictatorship more palatable to the West. Several years ago, the ex-General, Khin Nyunt, appeared in Al Jazeera English’s Rohingya genocide documentary ‘EXILED’ (https://www.imdb.com/title/tt8354820/) and recalled his private meeting with Singapore’s strongman, rather appreciatingly:

Mr Lee Kwan Yew-gyi was so helpful to us. He gave us valuable strategic advice to make ourselves (the military regime) more presentable to the world.”

A board director of the then French national oil corporation, Total, the Cambridge-educated Lee knew what he was talking about. After Germany, a long-time arms-provider and tech-supplier in the military-run mining and offshore oil exploration in Burma, Total of France itself, was one of the most influential corporate lobbyists against any type of stringent European Union sanctions against Burma.

Not to be outdone, Burma’s Cold War-era adversary of Rangoon, namely Thailand, had by then discarded its dated policy of commercially and strategically “sponging” off the Burmese neighbour’s long-simmering civil war. Instead, the new Burma game for the military-corporate complex in Bangkok was to go straight to Rangoon, the then capital, and strike direct business deals with the Burmese war-makers, then operating as the State Peace and Development Council or SPDC.

Ex-General, Chavalit Yongchaiyudh, who served as Supreme Commander of the Royal Armed Forces of Thailand and Prime Minister, led their shift, and secured lucrative deals in logging, agriculture and other bilateral commercial pacts. The billionaire PM Thaksin Shinawatra stayed the course. Needless to say, Bangkok’s shift was at the expense of the ethnic armed resistance organisations along the Thai-Burmese borders (such as Karenni, Shan, Mon and Karen), which in previous decades were used as Thailand’s buffers against the historical Burmese Enemy.

In those years, the Burma policy world was caught in the emerging Orwellian duality of “Sanctions Bad, Engagement Good” of international debates which took place with respective proponents talking past one another, pursuing their own concealed interests.

While these debates were taking place, some of us Burmese were exploring different paths of resistance. For instance, a group of Burmese dissidents and the Karen National Union leaders were engaged in the political defiance initiative of ex-US Colonel Robert Helvey, and the late Dr Gene Sharp, the noted theorist of non-violence resistance. There were others who sought to expand and revitalize the border-based armed resistance by groups such as the Karen National Liberation Army and, to a lesser extent, the All Burma Students Democratic Front. 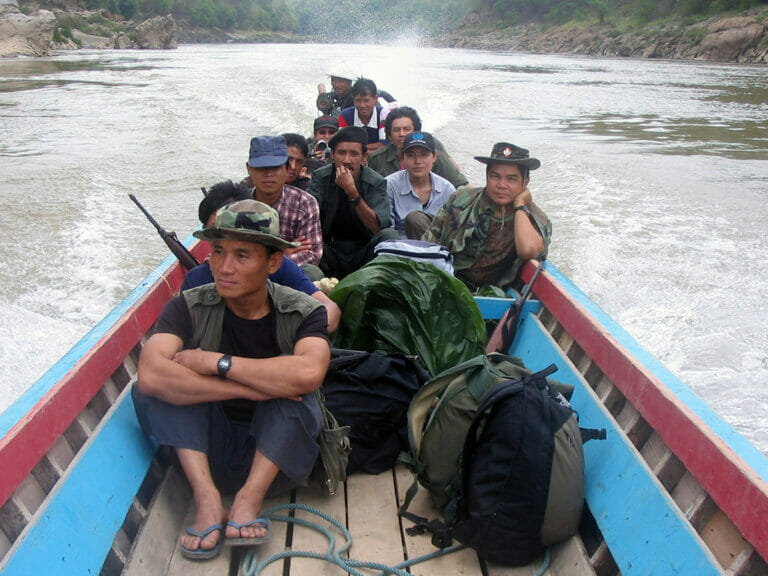 ZARNI travelling upstream on the Thai-Myanmar boundary river, the Salween, with the Karen revolutionaries, May 2003

One of the triggers behind the renewed interest in the border-based armed resistance movements was the vicious, pre-meditated attack – (some said the attempt on the life of the NLD leader, Aung San Suu Kyi herself) – against the travelling NLD campaigners, including Suu Kyi herself and her deputy ex-general Tin Oo on 30 May 2003. The shock and the outrage rippled through the Burmese public, as well as amongst the Burmese dissidents in exile, and those working through the National Council of the Union of Burma (NCUB) based unofficially out of the Thai border town of Mae Sot.

Chaired by the Karen National Union leader, General Saw Bo Mya, the NCUB was originally envisaged as a shadow multi-ethnic parliament of sort, which would complement the Washington-based National Coalition Government of the Union of Burma, headed by German-trained-mathematician-cum-MP-elect of 1991 elections, who happened to be one of Aung San Suu Kyi’s older first- cousins.

But long marginalized by “the exiled government” of NCGUB, that operated in the corridors of western powers such as USA, Norway, Australia, and so on, the border-based National Council approached me for a meeting to discuss prospects for international support for revitalised armed resistance against the Burmese dictatorship.

The Depayin Massacres coincided with my first time-ever visit, and a 2-weeks stay, in the Karen National Liberation Army Brigade Five headquarters, across the Salween River opposite Thailand’s Mae Sariang District, criss-crossing the land-mine-infested Karen war region. I had just come from the KNLA Brigade Five war region back to the Thai border town of Mae Sot when the NCUB leaders approached me for a confidential meeting. 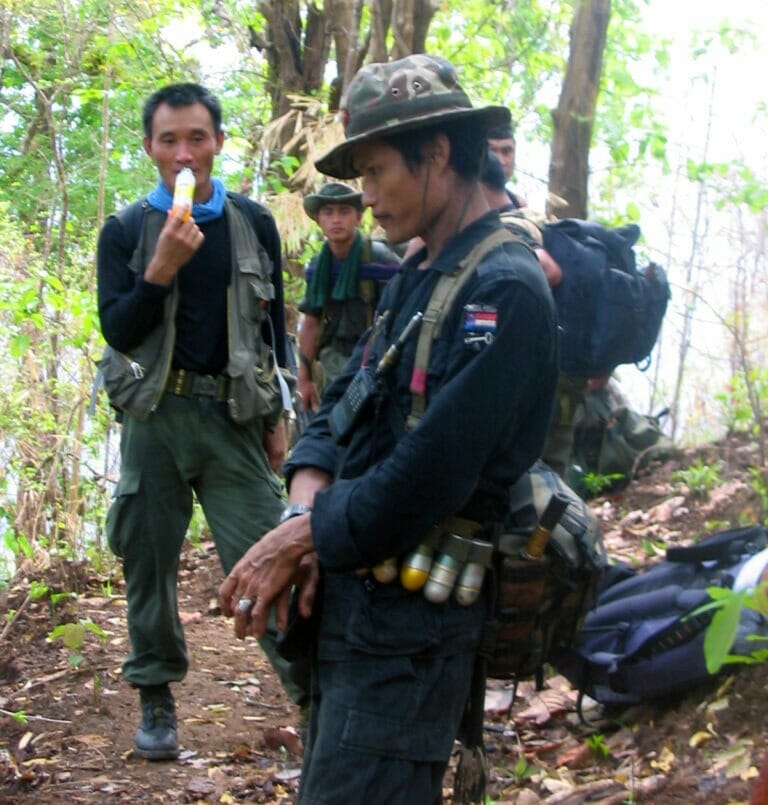 KNLA brigade commander Bawt Kyaw Hae and escort team on a short break on way to the headquarters (now deputy commander in chief of the Karen National Liberation Army or KNLA), May 2003

Presided over by the KNU General Secretary, the now martyred leftist Karen leader, Pado Mann Shar, our meeting went well. The NUCB subsequently proceeded to task me with a provisional assignment to seek any, and all, “material support” from sympathetic western actors for stepping up the armed movement inside Burma.

Obviously, the NCUB leaders thought, rightly or wrongly, that a grassroots campaigner with years of experience and contact with western governments, particularly the United States, would be better-positioned than they, 5,000 miles-away from the nearest western capital.

But the exiled Burmese government in Washington, which “took orders” from Aung San Suu Kyi, the icon of Burma’s non-violence resistance, was not amused when it received a brown-enveloped copy of my official assignment from its fraternal organisation, led by a group of die-hard armed revolutionaries made up of Thailand-based Karen, Rakhine, Pa O, and leftist Burmese dissidents in exile. My mission was over before it even got off the ground: Suu Kyi’s men in Washington leaked the news of the assignment to the Burmese diaspora.

That was the early summer of 2003. I am sure General Saw Bo Mya and the war-zone-based NCUB also assigned others whom they had a degree of confidence with such uncertain and potentially explosive missions. But we were rather late in these revolutionary games played by two rival blocs, the East, and the West.

In 1973, the late Lou Walinsky, former chief economic adviser (1953-58) to the democratic Government of Burma under Prime Minister U Nu and a close friend of mine, helped secure the $2 million “donation” from a Canadian oil company with a commercial interest in Burma, to support U Nu’s attempts to organize and wage armed resistance, using the Thai-Burmese border region as its base, against the military rulers who deposed his former boss in 1962. 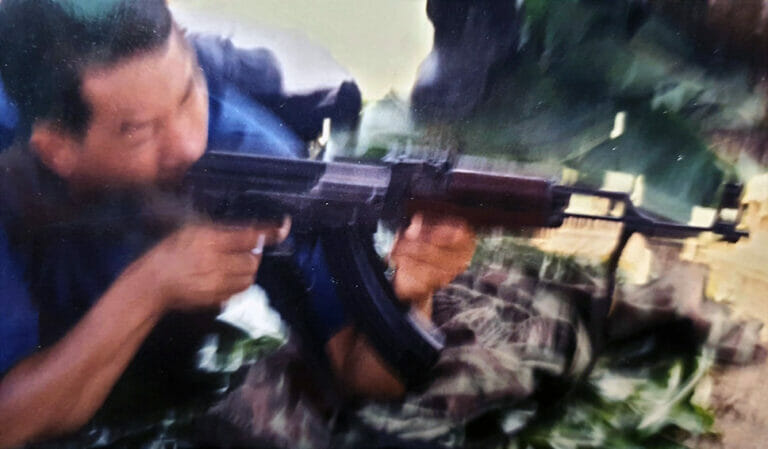 ZARNI learning to use firearms, the KNLA Brigade Five, May 2003

Even without the exiled government leaking my abortive assignment and the exile’s denunciations of it, it would in due course have become apparent to the KNU and NCUB leader General Saw Bo Mya that the prospects for western support for renewed armed revolution against Rangoon were slim at best, and non-existent, at worst.

At the start of 2004, General Bo Mya shocked even his closest deputies such as the now martyred Padoh Mann Shar when he boarded the Rangoon-bound Thai Air Force-plane to open a new chapter of engagement with the Burmese military leaders, his erstwhile enemies. 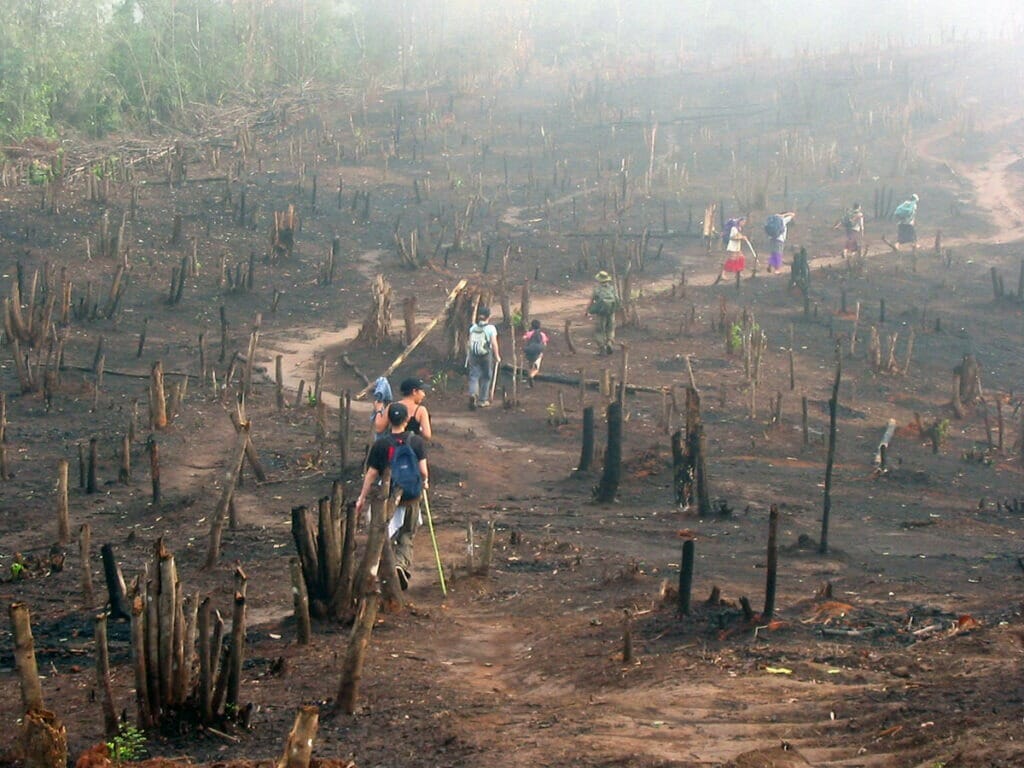 ZARNI and visitors walking through the war-torn Karen state to reach KNLA Brigade Five headquarters, May 2003