France’s Long Struggle for Democracy: the Era of Macron-LePen

FORSEA Dialogue Series on Democratic Struggles is hosting a public discussion with a constitutional law scholar and a student of French politics Professor Marie Gren of Sorbonne on 26 April.

A young French journalist who has covered the “Yellow Vest” movement characterised the run-off as a contest of unpopularity. That is, French voters are casting their vote against the candidate they hate more. While concerned about Le Pen’s loathsome Islamophobia and resurgent white French nationalism, many left-leaning young voters do not seem to be prepared to vote for Macron – whom they consider a typical banker who lives in the world of the rich and does nothing for the vast labouring classes.

After his election in 2017, Macron has failed to deliver on his numerous campaign promises. Steep consumer price hikes (particular fuel prices) and pro-corporate/employer changes to France’s employment and labour laws, among other things, had triggered massive weekly protests and riots across France, having given rise to a powerful “Yellow Vest” movement to oust Macron.

FORSEA Dialogue Series on Democratic Struggles is hosting a public discussion with a constitutional law scholar and a student of French politics Professor Marie Gren of Sorbonne on 26 April.

See who is who in the French Election of 2022: https://www.euronews.com/my-europe/2022/04/11/french-presidential-election-who-s-who-in-the-race-to-replace-macron 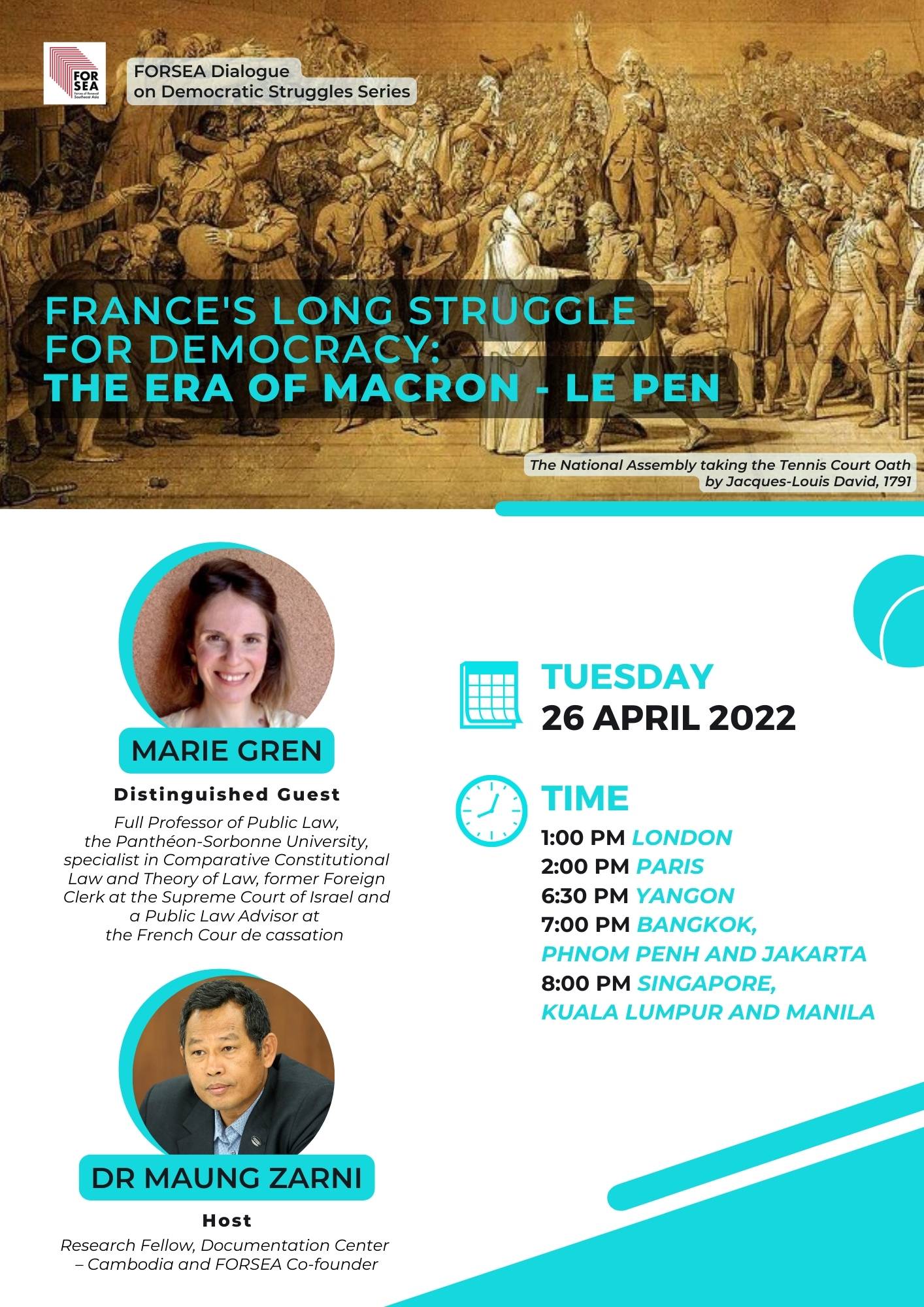 Marie Gren is a Full Professor of Public Law at the Panthéon-Sorbonne University.

She specializes in Comparative Constitutional Law and Theory of Law. She has taught in various fields of public law in French and in English. She has been a visiting Researcher at the University of Tel-Aviv (2013) and Columbia University (2014) and an Erasmus Scholar at the Jagiellonian University in Krakow (2022). She has worked as a Foreign Clerk at the Israeli Supreme Court and as a Public Law Advisor at the French Cour de cassation. She speaks fluent French, Polish and English and has good notions of Hebrew and Russian. Her research is focused mainly on constitutional transformations. She also works on prisons and constitutional education.

She wrote a book (PhD published in 2019) which deals with shift of Constitutional Paradigms, akin to the scientific revolutions described by Thomas Kuhn. The case study of this theoretical analysis is the progressive transformation of French, British and Israeli systems towards a greater preeminence of constitutional norms, under the joint efforts of judges and legal scholars. She wrote several articles on the democratic quest of the Israeli Supreme Court (2017, 2019) and its Americanization (2014). She wrote on the implicit constitutionalism at work in the United Kingdom through the Miller I case (2017) and has analyzed the constitutional shift of paradigm in Poland towards illiberal democracy, through the length of “state reputation” (2019) and nationalistic democracy (forthcoming). She pondered on a possible Frexit (2017) and produced a general analysis of the role of judges at Supreme and Constitutional Law Courts for the Max Planck Encyclopedia of comparative constitutional law (forthcoming). She currently works on the Chilean Constitutional Assembly and on a general overview of the transformation of legal traditions in the world (questionnaire online).

She has analyzed several aspects of prisons’ constitutional framework: prison privatization in Israel (2011), disciplinary powers of the prison governors in France and the United Kingdom (2014) and the use of constitutional judicial review mechanism (QPC) by prisoners in France (2020).