“I am Proud to be a Burmese Today”

I never thought I would feel proud again as a Burmese who deeply cares about my country’s affairs. Today I hold my head high, whatever the immediate and short-term outcome of this revolution. This is unparalleled in Burmese history over the last 100 years since the first political strike against British colonial education in 1920.

There are feeling of pride to be a Myanmar today after a full decade of feeling ashamed of my country’s infamous racism and genocide. Here are the reasons why I hold my head high again.

What the world is witnessing via social media and other platforms is not simply the sequence of the coup, the public protests and the crackdown, however violent.

A Revolution in its Early Days

As such, there is no negotiated settlement or mediated de-escalation.

I know this view sounds extreme, radical even, and many would be inclined to dismiss this as an angry exaggeration. Yet the shared popular opinion – backed by evidence – is that Myanmar is under terrorist siege, or the equivalent of a Fascist occupation. 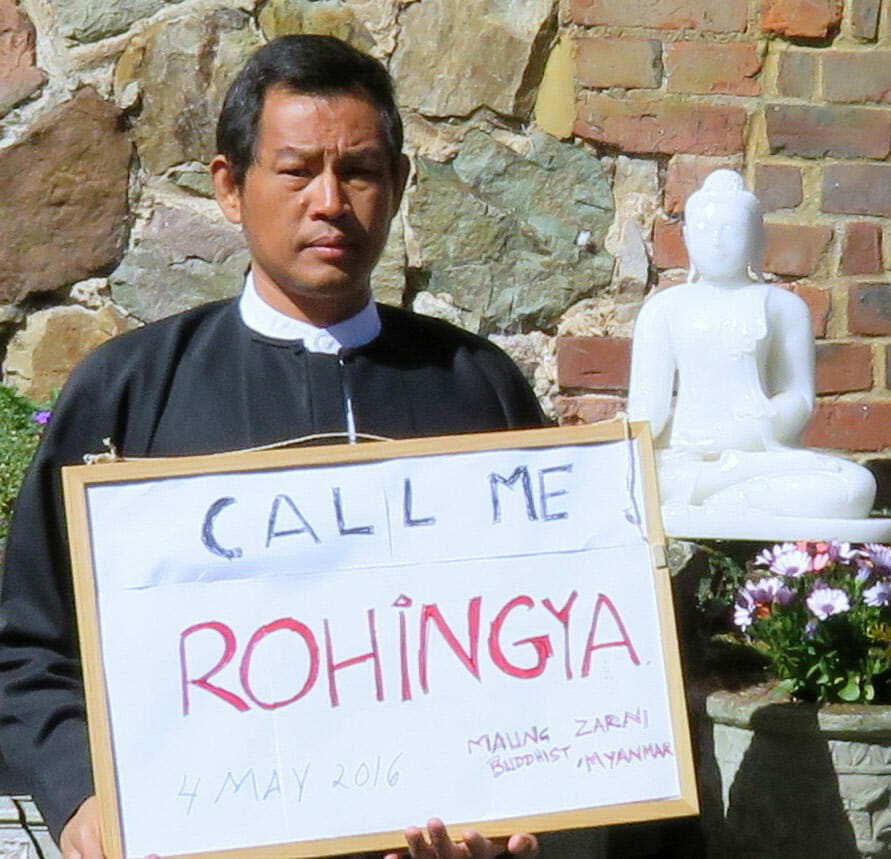 Maung Zarni: No longer ashamed of his country.

I monitor the situation via multiple channels – unfiltered social media platforms, Signal conversations with those in hiding, still organising protests, those in the armed resistance regions, those who support the protests, those who have access to the military, and the mainstream commentaries and analyses.

Since the crackdown began last month my daily morning routine has been sifting through extremely violent videoclips and facebook and twitter links. I can see and feel the armed men’s characteristic sadism in violent acts, day and night, perpetrated against unarmed civilians – men and women, adults and children – and even dogs on the streets.

One of my late advisers for my PhD was a pioneering scholar of Nazi SS and its leader Himmler. I have developed an acute sense of detection on types of violence: first, normal bureaucratic acts of violence when troops do what they are ordered to do, without deriving any personal satisfaction from inflicting pains on fellow humans, friends or foes and, in sharp contrast, second, the sadistic type which brings much personal pleasure – and rewards to the perpetrators.

The latter was the kind that my late adviser said he found most commonly perpetrated by the surrendered SS officers. He personally interrogated scores of them in the Allied Occupied Germany immediately after the collapse of the Third Reich.

I have absolutely no doubt in my mind we are not dealing with a regular national armed forces that use excessive force to quell protest movement but rather a sadistic Fascist type.

A frontline protester named Min Min Zaw was killed by the junta’s armed forces in Monywa, Sagaing, on Sunday morning. He was shot in the head while he was preparing street barricades for a protest to start, a local doctor on strike said. #WhatsHappeningInMyanmar pic.twitter.com/1cLcLWl2tn

I know that the media, diplomats, policy advocates, human rights NGOs, world’s politicians are not prepared to call a spade a spade, and still delude themselves into thinking that they can in due course put enough economic pressure on the regime to reverse the latter’s course.

I have always been the odd man out among those who comment on Burma. And I have not been wrong with my assessments of Burma – peace process, top-down reforms, genocide, Aung San Suu Kyi, and so on. For the last decade or so since I stopped following Aung San Suu Kyi’s leadership, I started thinking for myself, irrespective of policy fads and popular opinions.

This time I know that my analysis happens to be in sync with commonly shared popularly opinion: Myanmar is under terrorist siege, or the equivalent of Nazi or Fascist occupation.

The Myanmar military has responded to pro-democracy protests “with the kind of violence normally reserved for the battlefield,” except the protesters don’t have guns. “Security forces have killed at least 215 people, mostly by gunshot.” https://t.co/rX03YblcZu pic.twitter.com/jqCKY5JBIk

This is NOT Normal Politics

Every established framework, that was still acceptable only two months ago is D-E-A-D, beyond any policy resurrections. These include ceasefire; the peace process; the 2008 Constitution; an Aung San Suu Kyi-centred universe of politics; and the fragile transition to disciplined democracy.

However unrealistic it may sound or appear, there is a societal consensus that the country’s armed forces must be dismantled – not simply the top generals reversing the coup.

This is no fantasy: it is a conclusion that is widely shared, felt and communicated.

There are groups, networks and individuals that have actively begun exploring different strategic ways to move towards this goal, by any means necessary.

No sane person in Myanmar today expects any external saviour or triggering of the so-called Responsibility to Protect doctrine. The messaging from all across society is simply that this is a people’s liberation movement, and not one simply restoring Aung San Suu Kyi and the NLD to office.

The coup was a seismic event which shifted society’s opinion – towards the Rohingyas, towards the military, towards federalism, towards self-determination, for better. The shift in these aspects of Myanmar affairs was utterly unthinkable, only two months ago.

I don’t know what seasoned American Sovietologists felt when they realised that “The Evil Empire” was suddenly disintegrating before their eyes while so few had foreseen it.

The Tatmadaw does look rock-solid in its institutional grip on territories and population – to normal eyes. But, look deeper, and there are signs of a system that is on its last legs. More than anyone else the people SEE them. They FEEL them.

I never thought I would feel proud again as a Burmese who deeply cares about my country’s affairs. I hold my head high today, whatever the immediate and short-term outcome of this revolution.

What I am seeing is unprecedented and unparalleled in Burmese history in the last 100 years since the first political strike against the British colonial education in 1920.

Read ရိုဟင်ဂျာနဲ့ လူနည်းစုက မြန်မာ့အပြောင်းအလဲအတွက် အရေးပါ published by Irrawaddy Burmese news group which talks openly about the embrace of the Rohingyas as Myanmar’s own people and Zarni’s position.

Banner: People marked the places where people were killed by the dictator’s bullets in Yangon, Myanmar on 4 March 2021. Image: Maung Nyan / Shutterstock.com