NextWhat does the Myanmar Provisional Measures Order by the International Court of Justice mean for ASEAN?
FeaturedOpinion

Decades of elite-initiated societal fragmentation have made it far more difficult to mount a coherent progressive challenge to the Philippines’ predatory politics.

It is almost a truism to say distraction and division are the stock-in-trade of most Philippine politicians. When engaging with the masses, usually to court votes that will secure or extend highly lucrative offices, political figures resort to a panoply of promises and emotive rhetoric to win over the crowd. Yet, power is seldom used as promised once it is attained. Government officials utilize their positions to reward their cronies, clans, and, on occasion, ethno-regional supporters. Patronage for some means its denial to others. Electoral campaigns are fought out among elite-led political groupings for the sake of sustaining or redistributing patronage. Administrative efficiency and basic service delivery remain secondary concerns. Exceptional public servants committed to more inclusive political programs do exist, but they face an uphill battle against entrenched interests benefitting from the status quo.

Very little wealth trickles down to the general populace despite eloquent pronouncements that, as a modern democracy, the Philippine state strives to better the lives of all its citizens.

Most scholars have classified the Philippines as a limited, or elite, democracy that works for the wealthy, privileged, and well-born. Larger socioeconomic segments might obtain incremental gains, but only if they remain obedient clients to the powerful. Meaningful reform can only come from without because those within mainly seek to protect and expand their privileges. Elites tout the virtues of faith and family or cast aspersions on anti-social elements exacerbating social degeneration, but they have yet to engage in meaningful structural reforms that directly involve ordinary Filipinos in civil governance. When the Philippine state reaches down into society, it does so with predatory or coercive intensions. Repression has long been the sine qua non of oligarchic resource accumulation. Elite enrichment is premised on subaltern dispossession and disempowerment. There is certainly much truth to this view of Philippine democracy. 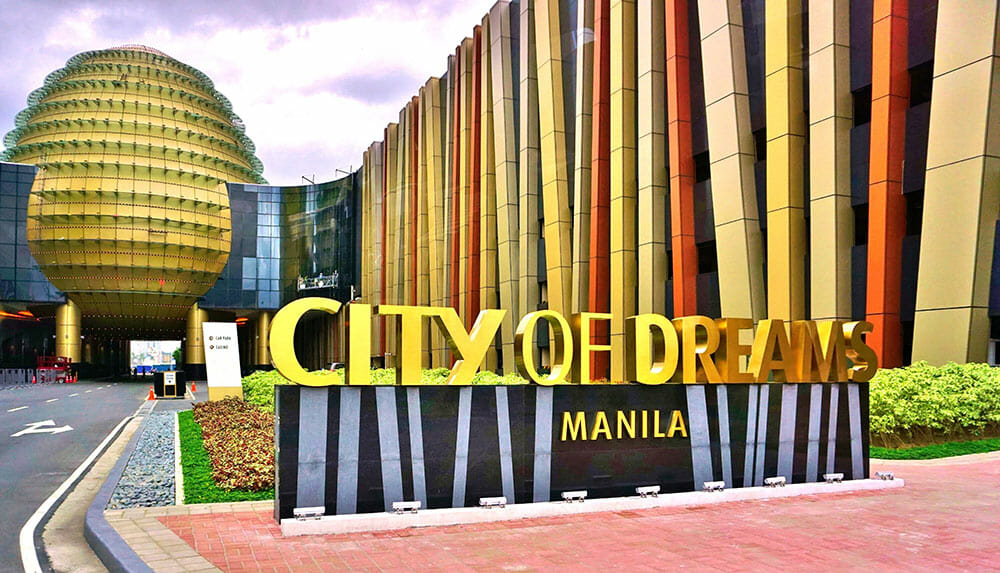 “A limited, or elite, democracy that works for the wealthy, privileged, and well-born,” the City of Dreams in Manila, an integrated hotel, casino, and shopping complex located in the neighborhood of Paranaque in the Philippines’ capital. Image: EQRoy / Shutterstock.com 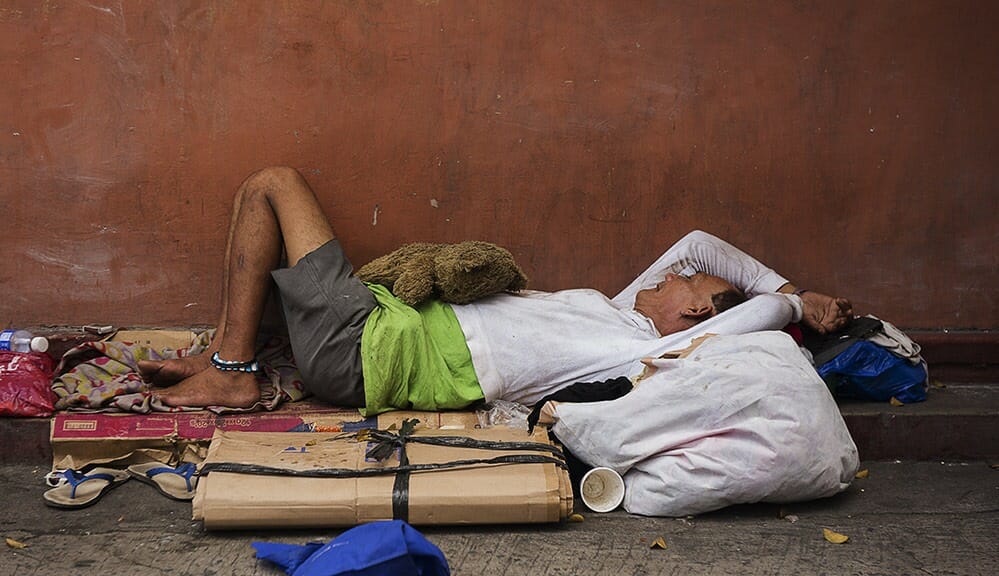 “Many ordinary Filipinos remain desperately poor and eagerly grasp at whatever patronage the powerful have to offer.” Manila, Philippines – Homeless Filipino man sleeping at the street. Image: aldarinho / Shutterstock.com

It is however my contention that subalterns are not solely mobilized from above to support oligarchic electoral contests or to ratify elite decisions. The masses have also played a central role in their own repression. Since the fall of Ferdinand Marcos in the 1986 People Power revolution, Philippine elites, threatened by leftist movements calling for fundamental social reform, have facilitated the democratization of organized violence via the formation of militias and vigilante gangs. Under the Duterte regime, this process has been digitized in the form of cyber trolls engaging in inflammatory hate speech that mimics the president’s own profane oratory. While cyber trolls do not directly participate in the extrajudicial killings that characterize the Duterte administration, their demonizing rhetoric and seeming ubiquity normalize the purported need for extreme measures to wipe out undesirables. Such measures have fragmented and militarized subaltern classes in ways that reinforce elite hegemony. 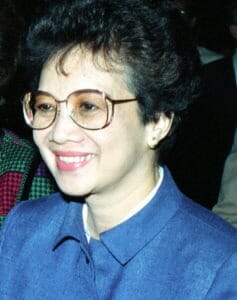 Corazon Aquino was a rallying point for anti-communist militias. State actors committing acts of violence with impunity took place under her watch.

Although Marcos had cultivated militia organizations since the mid-1970s to counter the military’s growing power, these auxiliary armed groups continued to expand after the dictator’s downfall. By 1986, traditional elites and politicized military officers faced an extensive communist insurgency that could not be suppressed by the state’s ham-fisted coercive machinery alone. A more sophisticated strategy geared toward outsourcing counterinsurgency into society was required. Military officials primarily associated with Chief of Staff, and later Secretary of National Defense, Fidel Ramos engaged in the countermobilization of ordinary Filipinos via tactics expropriated from the communist movement. Special operations teams deployed to the countryside propagandized, organized, and armed agrarian communities in insurgent zones. Military personnel also built up urban militias in areas where communist violence against non-cooperative elements bred resentment. Army and Constabulary commanders aggravated these local fissures by providing the means to pursue personal grudges.

President Corazon Aquino, elevated to near sacral status due to her role in overthrowing Marcos, acted as a rallying point for anti-communist militias. Her de facto sanction allowed ostensibly non-state actors to commit acts of violence with impunity. As had been the case during the Marcos era, regular military personnel operated in tandem with militia units committing atrocities. State/militia excesses were scaled back in the 1990s as the communist insurgency waned. However, the Philippines has witnessed periodic accelerations of military and militia violence during particularly predatory presidential administrations. Gloria Arroyo’s administration (2001-2010) saw a return to levels of repression comparable to those seen in the 1980s.

The Philippines’ current bout of state violence has involved non-elites in both traditional and novel ways. Vigilante hit squads made up of moonlighting policemen, hired assassins, and other lumpen elements are probably responsible for tens of thousands of murders.

Their victims are labeled drug pushers, although they are mostly slum dwellers and social marginals who have fallen through the cracks of a country committed inequitable development. For all his talk of cleaning out the established oligarchy, Duterte has reserved the state’s most virulent persecutorial powers for the poor. His personal rivals have been hounded, and occasionally imprisoned, while his cronies and kinsmen transform themselves into a new clutch of rent-seeking oligarchs. Focusing public attention on the drug war helps obscure the Duterte clique’s illicit enrichment. 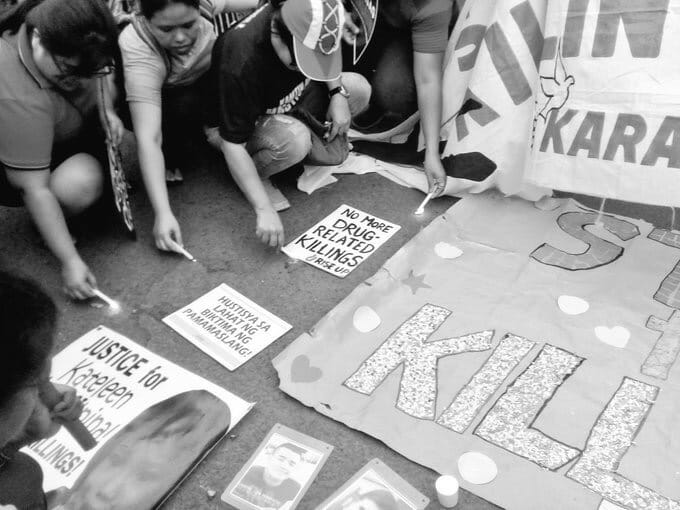 Many middle class and ordinary Filipinos have taken part in cyber trolling or shouting down Duterte’s critics at public events. Surely, some have been paid to do so, others are perhaps grateful that they are not on the receiving end of state brutality. Militia service, vigilante killings, and cyber trolling all impart a sense of empowerment to those involved. Yet, this form of empowerment ultimately reinforces existing power structures and the political clans that benefit from them.

Decades of elite-initiated societal fragmentation have made it far more difficult to mount a coherent progressive challenge to the Philippines’ predatory politics. Persecutorial campaigns launched to defend elite privileges or serve the personal ambitions of demagogic strongmen have repeatedly mobilized subaltern elements to sustain their momentum. Most ordinary Filipinos remain desperately poor and eagerly grasp at whatever patronage the powerful have to offer, even if this patronage is contingent upon committing or encouraging acts of violence. Nevertheless, we cannot entirely discount other forms of subaltern agency in counterinsurgent repression. Leftist and Muslim separatist movements are riven with their own dysfunctions, factional cleavages, and counterproductive violence. Philippine state officials freely exploit these tensions when they occur, thus compounding societal incoherence and weakening challenges to the archipelago’s limited democracy.