Yesterday, Myanmar media broke the news of the release of Wirathu, a 53-year-old anti-Muslim Myanmar man who claims to be a Buddhist monk.

Last night I went to bed with a heavy heart not so much because I fear that this vile and hate-driven man from Mandalay, my hometown, would still have a great sway with the majority Burmese Buddhists, but because I anticipated the repeat in the western media of the previous Orientalist coverage.

Myanmar’s dominant Buddhist public have largely woken up to the fact that they were systematically brainwashed to view Muslims – including the Rohingya victims of genocide – as the enemy of Buddhist Myanmar. Having abandoned even Aung San Suu Kyi’s long-standing policy of not recognizing Rohingyas as a part of Myanmar, post-military coup, the Burmese public are instead demanding an inclusive new society befitting the new collective vision of Myanmar as a federal democracy. (On Al Jazeera, Maung Zarni shares his analysis of the unprecedented and significant development in Myanmar. | Zarni’s Blog)

But elsewhere the Orientalist coverage that TIME’s 2013 coverage of Wirathu and his campaign of Islamophobia has since set the trend. It is worth taking a cursory glance back at Orientalism in the news reportage about what essentially was the military-orchestrated, sustained and systematic hate campaign directed at the country’s Muslim communities in general and Rohingya Muslim in Rakhine state in particular.

Putting Wirathu’s mug shot on its cover, TIME (1 July 2013) led the pack with its featured story entitled “The Face of Buddhist Terror”, without quotation marks around the word “Buddhist”. It shifted the focus away from the military and its structures as the orchestrator, onto Orientalist ideas of Burmese society.

The veteran Swiss filmmaker Barbet Schroeder told France’s AFP news agency that “he has never been as scared by anyone as he was by a Burmese Buddhist monk named Wirathu.” In Schroeder’s words, “I am afraid to call him Wirathu because even his name scares me. I just call him W.”

Since 2011 when BBC came under public criticism from the Burmese public for its inclusion of Rohingya Muslim on the map of western Myanmar in its news story BBC under fire on Rohingyas, I have tracked the rise of nationalism cloaked in the pseudo-Buddhist language of “race and faith” protection. Buddhism, doctrinally speaking, does not recognize either “Faith” or “Race” within the teachings and philosophy of No Self and Impermanence.

I saw the not-so-hidden hands of the Burmese military in the anti-Muslim violence. The Tatmadaw or the armed forces have, over decades, cleansed the armed forces of Burmese officers with Muslim and Christian backgrounds. When I grew up, if the dictator Ne Win was staying in my city of Mandalay overnight all mosques were banned from broadcasting their 5-per-day daily prayer calls. So, I advised the acclaimed filmmaker who got in touch with me via email before his filmmaking trip to Myanmar to pay close attention to the real institutional culprit. Alas, the facts about crucial structural and institutional factors did not advance his Orientalist project of making “W” as this bone-chillingly scary “devilishly clever” Holy Man of Buddhism.

In Orientalist discourses rooted in the White Europe’s colonizing missions, the two religious Others – Islam and its adherents and Buddhism and Buddhists have been framed in two diametrically opposing ways. Through this racist prism, Islam is constructed as inherently violent and Muslims are blood-thirsty, their history is written by sword and blood. In sharp contrast, Buddhism I viewed as promoting peace and Metta or universal loving kindness. Buddhist monks with shaven heads are understood as inherently peace-loving, in the mould of the Dalai Lama who could relay his message of Metta and his Tibet’s struggle against the evil China, through Hollywood A Listers including the likes of Richard Gere or Brad Pitt.

Against this Orientalist mental and journalistic template, of course the hate monk Wirathu is very news worthy: a Buddhist holy man, with a shaven head, with “serene” looks – as Beech put it – promoting genocidal racism.

In the sensationalist title “The Face of Buddhist Terror”, the TIME correspondent Hannah Beech– now New York Times Bureau chief in Bangkok – dubbed Wirathu “Buddhist bin Laden”, which suggested, falsely, that his particular brand of “terror” came with the qualification “Buddhist” and rooted in “radical Buddhism”. To be fair to Beech, the content of her article was critical of Wirathu and his hate-mongering and that was other hate-preachers in the Theravada Buddhist world such as Sri Lanka. 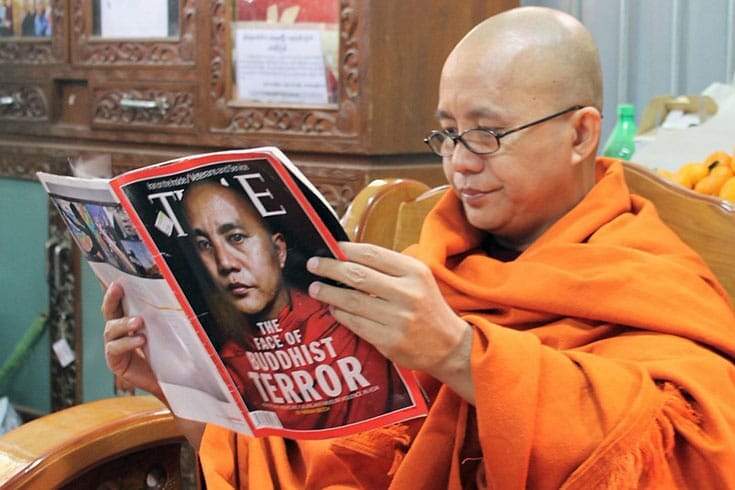 “The Buddhist Bin Laden,” pictured above reading a “TIME” magazine article about himself. Photo by Lily and Maung Thin, VIMEO

But TIME’s cover page had already done instant damage. Myanmar’s Buddhist majority reacted strongly against the Western media’s portrayal of their faith in these broad-brush strokes – not that the majority noticed the absence of quotation marks around the operative word Buddhist.

Any advertising expert, publicist and scholar of mass communications knows what matters most is the snappy headline and the image. And the medium where the hate-preacher appeared mattered more than the critical analysis inside the on-line publication.

That was why, Marshall McLuhan, the late world-renowned Canadian scholar of media, gifted the world with his memorable if enigmatic line “the medium is the message”. In his now classic Understanding Media, McLuhan wrote, “in a culture like ours, long accustomed to splitting and dividing all things as a means of control, it is sometimes a bit of a shock to be reminded that, in operational and practical fact, the medium is the message.”

Federman continued, “Many of the unanticipated consequences stem from the fact that there are conditions in our society and culture that we just don’t take into consideration in our planning. These range from cultural or religious issues and historical precedents, through interplay with existing conditions, to the secondary or tertiary effects in a cascade of interactions.”

Beech’s TIME cover-story – intended for the international English-readership – also went viral on the Burmese language electronic medium – most notably Facebook, which is synonymous with the Internet in Myanmar.

TIME’s image of Wirathu as Myanmar’s “Buddhist” poster boy of hatred and, specifically, “Buddhist Terror”, anchored in the fear and loathing of Islam and Muslims transformed the ex-criminal convict in Buddhist monk’s robe into an instant media celebrity, a national defender of Buddhism and Buddhist Way of Life, international notoriety or not.

The western media coverage has turned him into a heroic icon of a Buddhist monk whose fiery hate-filled speeches and tales of calling for the expulsion and extermination of “culturally invasive and demographically threating Muslims” transcended national boundaries in Theravada Buddhist world of Sri Lanka, Thailand, Taiwan, and S. Korea.

Several months prior to TIME’s cover story, U Pazin Pein, a contemporary of Wirathu and a highly respected Buddhist abbot, risked his life and saved nearly 1,000 local Muslims in the mid-sized city of Meikhtila, 90-miles south of Wirathu’s base of Mandalay, during the pogroms against Muslims in March 2013.

I knew U Pazin Pein well and he recounted his close encounter with his own death in stopping the sword-wielding mob at the entrance of his monastery. He led a small group of resident monks and told them in no uncertain term, “you have to kill us first, before you enter our monastery”. Thankfully, the pursuing mob turned away. This was a nationally known story where the good Buddhists rejoiced and honoured the abbot for living his Dharma and effectively saved hundreds of human lives. Google “U Pazin Pein”, and you would not find any reportage in the western media.

Add “Buddhist terror” to the standard duo of Sex/Scandal, War/Violence as the angle that sells in the media industry. Unlike these standard issues, “Buddhist Terror” is rooted in the distorted invention of Buddhism and Buddhists as peaceful (vis-à-vis Islam and Muslims as violent). This is what is so deeply troubling about the cascade of western mainstream media, picking up the old trend – Orientalizing hatred and racism in non-Europe, non-Christian spaces, in Wirathu’s case, “Buddhist” Myanmar.

Now 8 years since Beech’s The Face of Buddhist Terror was transmitted globally and among the 50-million Buddhists of Myanmar, Wirathu is out again, thanks to his all-too-well-known protector, Myanmar’s genocidal military.

Judging from Burmese language social media denunciation of Wirathu over the years, the overwhelming majority of Myanmar Buddhists no longer regard Wirathu a good Buddhist, let alone a holy monk. Wirathu’s influence was rooted in the military’s institutions – yet the public has rejected the military leaders along with him. And yet in the dominant media templates Wirathu must continue to play “this useful Buddhist” for their Orientalist tale-telling disguised news.