FORSEA Dialogue calls for cross-border cooperation among concerned scholars to foster “counter-spaces” for intellectual freedom which is a pillar of an autonomous civil society.

As part of its Dialogue on Democratic Struggles Across Asia, FORSEA hosted an hour-long discussion on states and universities in Southeast Asia with the two leading historians of Southeast Asia, namely Thongchai Winichakul, Emeritus Professor of History at the University of Wisconsin at Madison and highly respected critic of Thai social and political issues  and Michael W. Charney, a member of the FORSEA Board of Directors and Professor of History in Asian studies and the School of Oriental and African Studies, at the University of London.

The two guests kicked off the discussion with a considerable focus on the planned closure of Yale-NUS College in 2025, a decision made by the college’s executives, with the consent of neither the faculty nor students, but obviously backed by the city-state’s authoritarian regime.

Winichakul and Charney contextualized the lamentable state of academic freedom in Singapore within the region’s long-standing trend of post-colonial, largely authoritarian states, using educational institutions in general as a crucial instrument to advance state agenda. 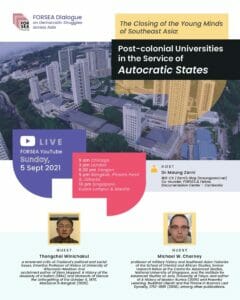 Typically, this agenda is openly tied to the need of the growth-focused economy including the labour market, and producing and reproducing obedient and uncritical citizenry, both discussants argued.   They then traced the DNA of the higher education in post-colonial societies of Southeast Asia to the European colonial period during which modern/Western universities were set up by the colonial rulers with the explicit purpose of creating western educated local elites from amongst the colonized masses, who would be “useful” to run and maintain colonial administrations and colonial economies.

Thongchai Winichakul pointed out that state and state-controlled managerial bodies of universities however, do not have a complete control over the educational processes or the outcome.  He offered as a concrete historical and contemporaneous example chronic waves of campus revolts against repressive regimes in both colonial and post-colonial periods.

Importantly, the discussants viewed external actors (for instance, corporations, philanthropist donors, militaries and political regimes) meddling in universities and colleges as a perennial, unwelcome but universal issue confronting faculty and students who view the mission of a university as fostering intellectual enlightenment and opening young minds in society. In their view, this mal-tradition of outside institutions of power and money exerting their undue influence and dictates in intellectual and academic affairs differs in degree – not in kind – across various political contexts.

However, universities in countries with civil society autonomous from political states and cultures where thinking is fostered as a matter of habit and freedom of speech protected as a right fare better in advancing and protecting the academic autonomy on campus.

The dialogue ended with a call for cross-border cooperation and solidarity amongst scholars, regional and international, who are concerned about this state-university nexus, and its inter-generational negative impact on civil society.  The universities across the region have not been allowed to contribute to the emergence and growth of autonomous civil society and culture that could potentially challenge the typically authoritarian orientation and modus operandi of post-colonial states in Southeast Asia.

The FORSEA Dialogue took place shortly after Academia SG launched its groundbreaking survey of academic freedom based on Singapore-based academics.

Academic Freedom Survey 2021 – Academia | SG  The survey shed light on some of the most pertinent issues confronting academics working in universities in Singapore:

Do academics in Singapore subscribe to international norms concerning academic freedom? How prevalent is the sense of being constrained? What are the mechanisms through which academic work is restricted?

Academia SG is holding a webiner on September 9, 2021 at 8 pm Singapore time. Please see below for details. 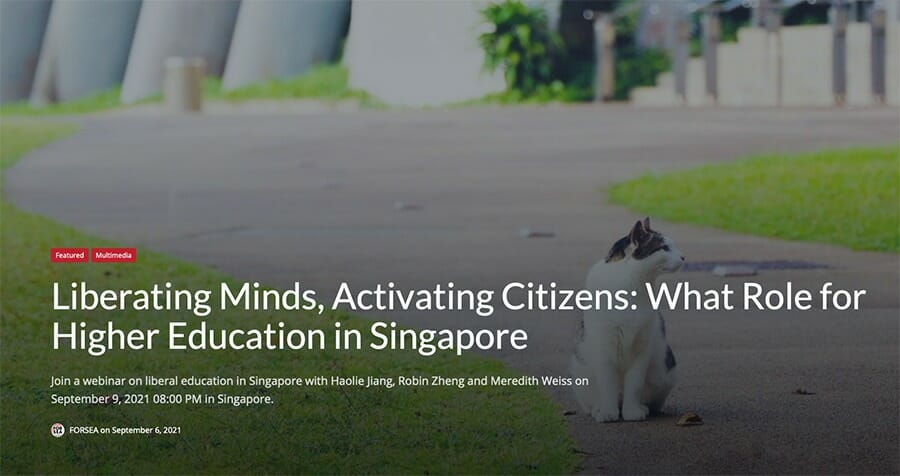 Banner Image: Singapore – University Town, a residential and educational development at the National University of Singapore. Buildings shown include the Educational Resource Centre, the UTown Residences, and the CREATE research complex. Wikipedia Commons