Nataphol Teepsuwan and Rugby School: A Conflict of Interest at the Education Ministry of Thailand

Here lies a problem. Nataphol’s ministerial position is undoubtedly a conflict of interest. He is running a private international school and at the same time heading the Ministry of Education, Thailand.

Thai politics is in crisis. So is the country’s education sector.

In the midst of university student protests in Thailand, which have been continuing since July, key traditional institutions in Thailand have been attacked for their archaic existence. University students demand immediate monarchical reform, an issue that has long been sensitive, if not dangerous. This demand is not only directed towards the monarchy, but also other institutions with vested interests in it. The military, for example, must be depoliticised once and for all.

While university students take politics to the streets of Thailand, high school students, for the first time, are voicing their frustration over the authoritarian nature of the Thai education system. For a long time, high school students have had to endure militaristic disciplines, from exacting uniform requirements, austere haircuts and rules of military-like deportment for students. Year-after-year, relentless drama has played out on social media over punctilious enforcement of unyielding hairstyling regulations. students who are judged to violate the rules would be humiliated – often publicly and in front of the class.

Female students’ long hair needs cropping short – this often leads to tears from transgressors that don’t measure up. Teachers use clippers to shear male students’ hair, sometime only on one side of their head, leaving the uneven haircut as a reminder of their rebelliousness. If their uniform is not up to the supposed standard, teachers may write humiliating statements on the person, such as “I am a bad student.”

The unrelenting preoccupation with excessive neatness of appearance covers up of something more serious rotting the Thai educational system. Long serving the power interests of the political leaders, the Thai curriculum is unnecessarily nationalistic, patriotic and royalist. It presents a distorted history of the country, over-emphasising certain topics at the expense of the others. For example, Thai high school students are obliged to study Buddhism even if they are Muslim or Christian. But the worst part of the system is the way in which teaching is handled: A spoon-fed method is preferred to a critical thinking.

In some ways, the larger campaign for reforming the monarchy has inspired young students to stand up and protest against the traditional teaching method. Tech savvy young Thais have been self-learning outside the classroom and this had led to disappointment with the rigid rote learning at school. Rather often, they have found self-learning is more useful than what they gain in class.

High school students hence took their frustration to the Ministry of Education. Twice already, they’ve demonstrated in front of the ministry, demanding educational reform, from the abolition of uniform and rigid hairstyling as far as a total restructuring of the educational system, both in terms of content and method. Should the reform fail to transpire, the minister has to resign, proposed the students.

Nataphol Teepsuwan is the Minister of Education. Previously, his past political activism caused serious harm on his country’s democratisation. In 2013, Nataphol and his wife, Taya, participated in months-long demonstrations in an attempt to remove the elected government of Yingluck Shinawatra from power and invite the military to intervene in politics. They became a part of the People’s Democratic Reform Council (PDRC). The name is everything but democracy. They were successful, finally, Yingluck was out of power. Nataphol Teepsuwan would be rewarded.

Nataphol was gifted the top job at the Education Ministry. This post may well suit him well, given that he has actively been involved in Thailand’s education industry. He is the chairman of Rugby School Thailand. On the School’s About Us page on its website, it says,

Rugby School Thailand champions a new era of international schools in Thailand. Our 80-acre campus sits in the majestic, rolling countryside of Thailand’s Eastern Seaboard near Pattaya, Chonburi, and the educational experience here is based on the expansive mindset and traditional values of a 450-year-old British private school model.

Our ethos is ‘the whole person, the whole point’. We believe in taking education beyond the classroom and nurturing the ‘whole person’—mind, body and spirit—to give our pupils a holistic sense of self and to enable them to achieve in all areas of life. Our children thrive in this glorious setting and its first class facilities; they enjoy a healthy, active lifestyle, full of variety and stimulation

Nataphol’s entry to this ministerial position is undoubtedly a conflict of interest. He is running a private international school and at the same time heading the Ministry of Education, Thailand. The linkage between the two roles could benefit Nataphol both as the chairman of his private school. A conflict of interests fertilises the practice of clientelism, ironically, this is why Teepsuwan protested against the Yingluck administration, which was condemned by his group as corruption-prone. 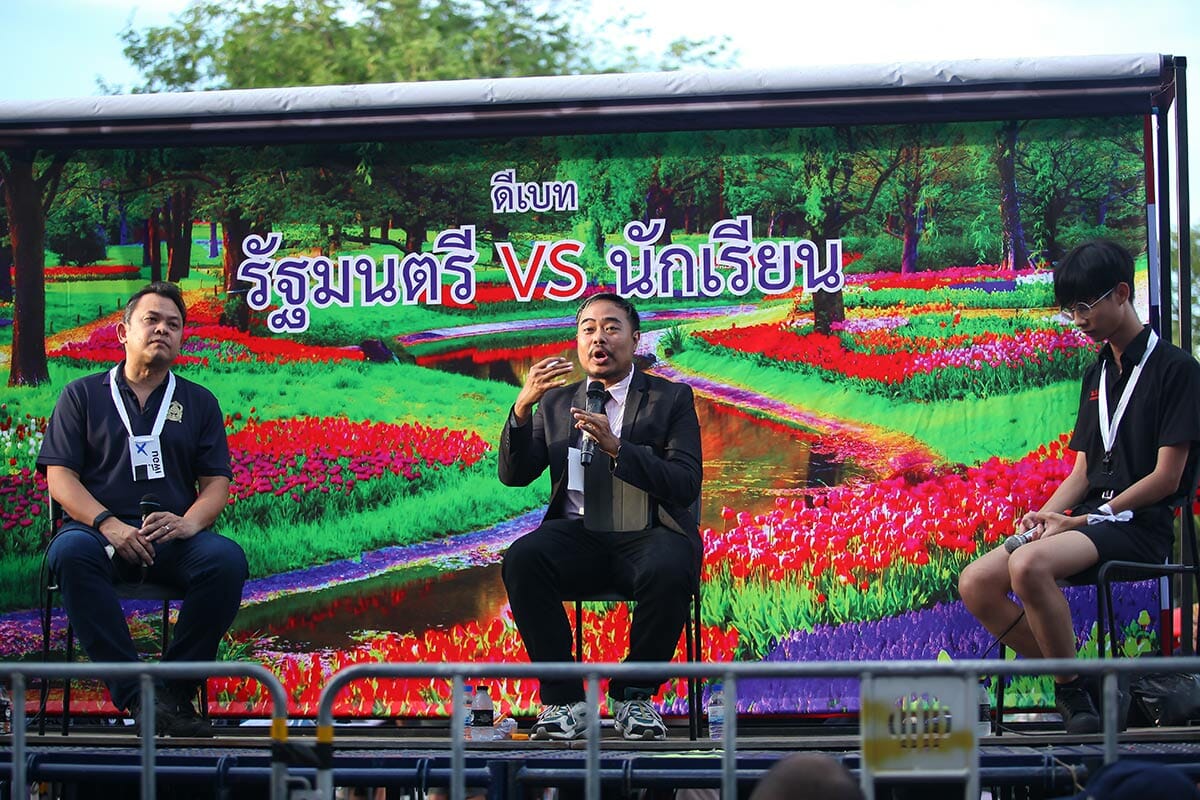 Natophol vs. Students mock debate at student rally, September 5, 2020, in from on Ministry of Education, Thailand. Image: kan Sangtong / Shutterstock.com

Ordinary Thai high school students also point out the discrepancy between the rules for them, and those at his international school. High school students in the national system succumb to unnecessary rules about neatness of appearance, yet students at the Rugby School Thailand enjoy more freedom in their expression. At Nataphol’s own school, students can sport any hairstyles. More importantly, it adopts the British style of education including self-experiment and in-class debate—something that is missing in Thailand’s national curriculum.

Nataphol lamented that forcing him to resign if he fails to support the reform was an act of intimidation on the part of the students. In reply, high school students reminded him of his own action many years ago when he intimidated Khunying Potjaman Damapong, the former wife of former Prime Minister Thaksin Shinawatra. Nataphol and and his wife were caught in a video clip whistling (catcalling) Potjaman as she was shopping at Bangkok’s Emporium Department Store.

High school students asked: “Why can’t we whistle you out, just like what you did to others?” They have a good point.