Thailand’s current protests have dragged a pleasure-seeking monarch away from his Bavarian retreat and into the heart of national politics as he stumblingly ventures out of royal compounds for selfies and overexuberant adoration from bused in crowds. Thus far, hard power has not been fully deployed against the demonstrators and the military’s role in all this remains unclear. The military must be brought under more coherent leadership before Thai praetorian power can assume new configurations.

Social scientists have long grappled with concepts of structure and agency. Certain analysts view these factors as mutually exclusive determinants in power configurations. Institutions possessing deep structural power across state spaces place significant limits on political change via elite agency. Whether elite actors are elected officials or appointed ministerial administrators, their room for maneuver is constrained by a combination of institutional prerogatives, established precedents, rent-seeking imperatives, and inertia. Outside aging industrial democracies in the global north, any threat to institutional power structures raises the danger of extraconstitutional interventions, usually via military coups that sweep aside and reset political arrangements to incumbent advantage. And yet, such arrangements are not set in stone. Periodic revisions to power structures are brought about by key players at critical junctures that either dismantle or refurbish dominant structures. The resilience of military influence in Thailand can partly be attributed to periodic infusions of insider agency. Senior commanders recalibrated the Thai armed forces during political transitions in order to defend and extend institutional privileges. Agency reformed structures, thus enabling those structures to sustain a prominent place in evolving political landscapes.

After a military coup successfully overthrew Thailand’s absolute monarchy in 1932, the primary point of political contestation shifted from struggles between throne and bureaucracy to struggles among bureaucratic segments. The People’s Party quickly split into military and civilian wings that jostled for supremacy until 1947. These conflicts had little to do with ideology. Both civilians and soldiers were equally elitist and capital-centric in their political orientations. Neither faction was willingly to entirely shut the door on the political past. Each side made and unmade alliances with royalist notables to undermine the other.

The 1947 Coup Group effectively ejected civilian elites from the political game after successfully suppressing the 1949 Palace Rebellion. Shortly thereafter, the navy was stripped of its material and political power after the bloody Manhattan Rebellion of 1951. By this point, the Thai army and police fell under the control of two warlords, Sarit Thanarat and Phao Siyanon with Field Marshal Phibunsongkhram attempting to maintain his tenuous grasp on power by playing his ruthless colleagues off against each other. This triumveral system of rule further concentrated political power in the armed forces but proved unwieldy and eventually led to Sarit’s seizure of power in 1957. His ruling army faction possessed fearsome firepower yet lacked the moral legitimacy necessary to institute the political reforms required to achieve political stability. Sarit thus personally intervened to craft a partnership with the Thai monarchy, an elite group that had heretofore viewed the military with suspicion. Sarit’s royalist praetorian regime combined despotic paternalism with monarchic charisma to project an image of stern benevolence. This power structure was reinforced by Cold War geostrategic priorities. The United States massively supported Thai praetorian rule in order to secure a forward operating base for military actions across Indochina. Sarit’s faction thus maintained its dominance of Thai politics until 1973. American aid, often with American prodding, was extensively distributed across the Thai geo-body in the form of roads, highways, airports, and other infrastructure. Yet, by Sarit’s death in 1963, his clique had become overly reliant on foreign assistance. America’s exit from Indochina, coupled with an increasingly assertive monarch removed vital planks supporting the Thanom-Phrapas faction. Thailand’s ephemeral return to democratic rule from 1973 to 1976 also witnessed a heavily factionalized military unclear as to its sense of direction. King Rama IX turned more to the police forces for political support and the loss of American patronage dimed praetorian power. The return to military rule in 1976 led to further factional rivalries that would not be fully resolved until well into the 1980s. 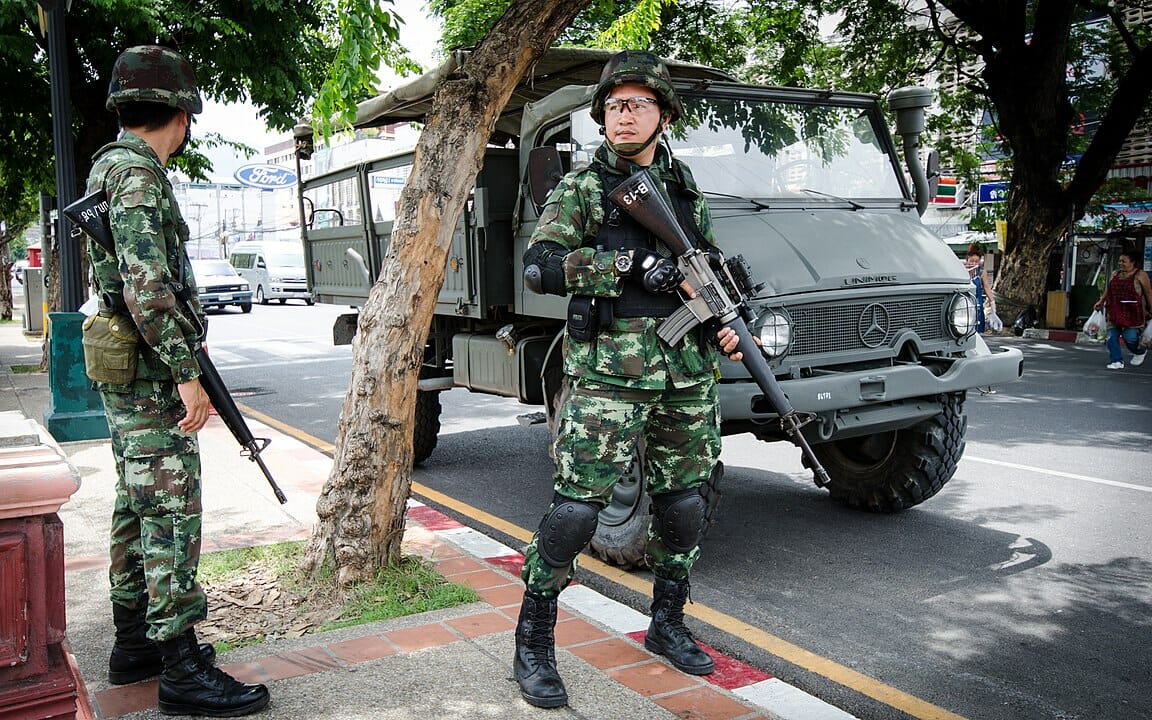 After his assumption of the premiership in 1980, Prem Tinsulanonda began to gradually construct a new praetorian power system. He took his wing of the military into a deepening alliance with the Palace and extended royalist political and patronage networks into the countryside. Attempts to institute more direct forms of military rule in 1981 and 1985 collapsed through a combination of Prem’s refusal to take part and the withholding of monarchic sanction. The junta that ruled Thailand from 1991 to 1992 also lacked legitimacy and collapsed after resorting to lethal force to quell pro-democracy demonstrations in May 1992. Thereafter, the Thai military became, for all intents and purposes, the monarchy’s soldiers. Democracy ran its course from 1992 to 2006. However, when it became too threatening to established royalist and military interests it was scotched by a military coup in 2006. When democracy returned and began to make new inroads into incumbent advantages, this performance was repeated in 2014. Prem’s initiatives gave the military a sense of purpose and justification for political involvement in a post-Cold War context. By acting as the enforcement agency of a deeply sacralized semi-divine monarch, the military could do no wrong.

Rama IX’s death in 2016 triggered an ongoing political transition. Rather than undergoing internal restructuring, Thailand’s new king, Rama X, seized the initiative to remake the military into his own private army. Prayut’s faction quickly lost its preeminent position to the king’s guard.

Rama X’s intentions appear to be the construction of a neo-absolutist regime that has little concern for popular grievances emanating from regional hinterlands. This transition is far from complete. Although key Bangkok-based units have been brought under the king’s personal control, excluded army factions are far from content. The 2019 elections that brought an end to NCPO rule and made Prayut Prime Minister have not resolved these tensions. Restructuring from within is always easier than remolding from without. Thailand’s current protests have dragged a pleasure-seeking monarch away from his Bavarian retreat and into the heart of national politics as he stumblingly ventures out of royal compounds for selfies and overexuberant adoration from bused in crowds closely watch by soldiers and civil servants in mufti. Thus far, hard power has not been fully deployed against the demonstrators and the military’s role in all this remains unclear. The military must be brought under more coherent leadership before Thai praetorian power can assume new configurations.