NextThe Taliban, its origins and impact — and the U.S. role in its comeback
FeaturedOpinion

it’s one thing for the United States and its British poodle to abandon dissidents worldwide during their hours of needs, yet it is a moral low for the British and American officials and leaders to coordinate acts of genocidal denial as they have done with their official statements on the 4th anniversary of “Ethnic Cleansing” in Rakhine State.

I was shocked and deeply repulsed, beyond words, to witness the apparent, coordinated attempts by the administrations of Boris John and Joe Biden at bleaching Myanmar’s international legal crime of genocide – no less – on the very day Rohingya survivors around the world have come to recognize as Genocide Remembrance Day. 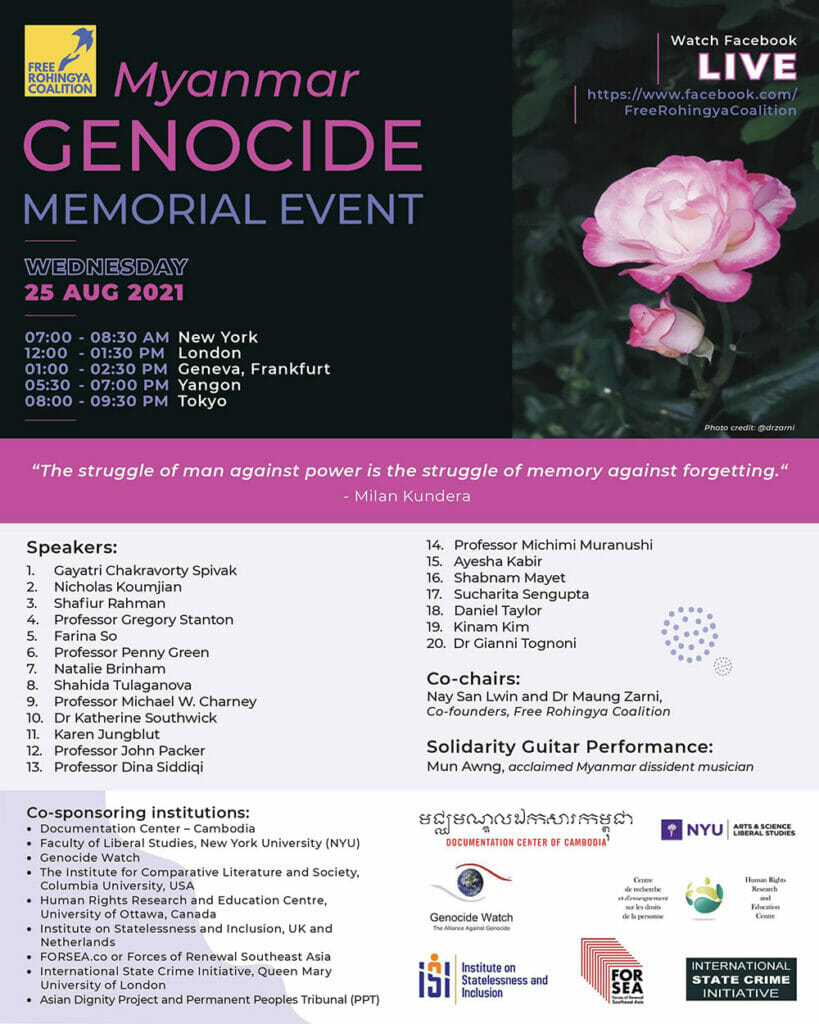 While the British Embassy @UK-in-Myanmar was busy tweeting “Today marks the 4th anniversary since the military’s committed ethnic cleansing against the Rohingya ….”  the US State Department issued a press statement, entitled “Marking the 4th Anniversary of Ethnic Cleansing in Rakhine State”.  The American version of spin begins with the opening sentence, “(f)our years ago, Burma’s military launched a horrific ethnic cleansing against Rohingya in northern Rakhine State.”

To belabour the obvious, the West’s liberal democratic regimes – in this case, the Anglo-American governments – manipulate the principles of human rights and inter-state treaties such as the Convention on the Prevention and Punishment of the Crime of Genocide in order to suit their undeclared geopolitical and corporate interests.

For the Americans, Myanmar genocide is viewed through its prism of paranoia about Beijing dislodging USA as the global hegemon.

The post-Brexit Britain is chiefly concerned about maintaining its market access and shoring up corporate profits in emerging markets, however heinous their business partners may be.

But even my 30-years of international human rights activism, at times in corridors of power, did not prepare me for the level of usurpation and moral depravity that the American and British policy-makers are prepared to sink. Washington and London in effect deny and dismiss the crime of genocide on the day Rohingya mourned their mass-deads and destruction while throwing humanitarian crumbs at the survivor community in sub-human conditions in Bangladesh and Myanmar.

By mis-naming and mis-framing the genocide as “ethnic cleansing”, alas, that favourite euphemism by the now dead Serbian genocidal leader Slobodan Milošević, Johnson and Biden regimes have added insult to the collective injury of several million Rohingya survivors, in refugee and IDP camps, in the diaspora and in boats fleeing from secondary persecution at the hands of the hostile host governments of Bangladesh, India and so on.

It is expected that unprincipled US leaders, democrats and republicans, would routinely attempt to use the morally loaded term “genocide,” both Lemkinian conception and the inter-state treaty Genocide Convention, to score cheap points against other rogue regimes such as China, Libya, or Syria. But it is yet another low for Washington and London to coordinate their Milosevicesque statements, in effect, dismissing Rohingya demand for calling a spade a spade.

The Biden Administration’s politically motivated refusal to officially acknowledge the institutionalized physical destruction of Rohingyas, declared a protected group under the Genocide Convention by the International Court of Justice, stands in sharp contrast with the overwhelming recognition and condemnations of Myanmar’s crime of genocide by US Congress.  The two leading lawmakers, who chair US Senate Foreign Relations Committee and (lower) House of Representatives Foreign Affairs Committee  publicly pressed US President Joe Biden “to make a formal determination that these crimes (against Rohingya) constitute genocide.”

Meanwhile, Gregory Stanton, former State Department official and the world’s foremost legal and anthropological scholar of genocide – trained at Yale Law and the University of Chicago – was reading his poetry “What is justice?”, at the Free Rohingya Coalition Genocide Memorial Event on 25 August, having asked pointedly, “What is justice for a lawyer who still won’t call it genocide?”.  https://fb.watch/7EiCy1kB-h/

In his forthcoming publication, entitled “‘thnic Cleansing’ is a Euphemism Used for Genocide Denial”, Stanton argues persuasively that the use of Milosevic’s euphemism “ethnic cleansing” is tantamount to genocide denial. 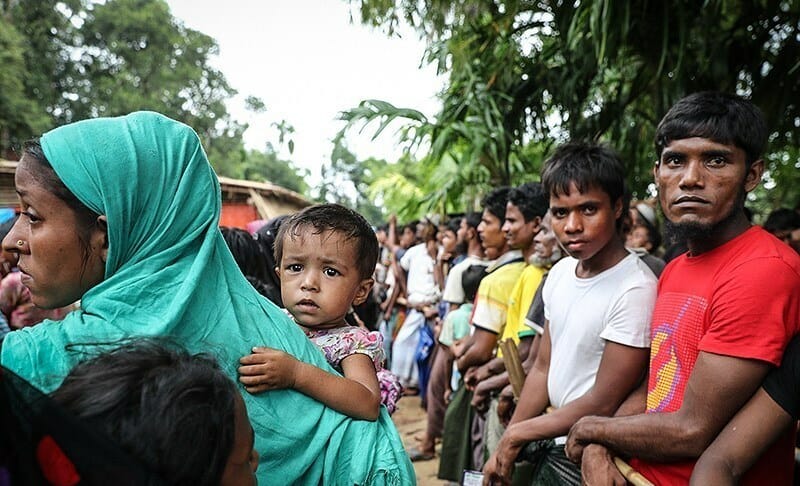 In Stanton’s scathing words of indictment: “The UN, press, human rights groups, and many governments still call the Myanmar Army’s aggression, genocidal massacres, and forced deportation against the Rohingya “ethnic cleansing.” “Ethnic cleansing” is a term invented by Slobodan Milošević and Serbian propagandists as a euphemism for forced deportation and genocide.   “Ethnic cleansing” in common usage means forced deportation. But unlike the crime against humanity of deportation or forcible transfer of population, and the crime of genocide, it is not a term that appears in the Rome Statute of the International Criminal Court. It has no legal meaning in international law. There is no treaty outlawing it.  No national legal codes prohibit “ethnic cleansing.” No prosecutor can charge anyone for committing it. The term is a license for impunity. 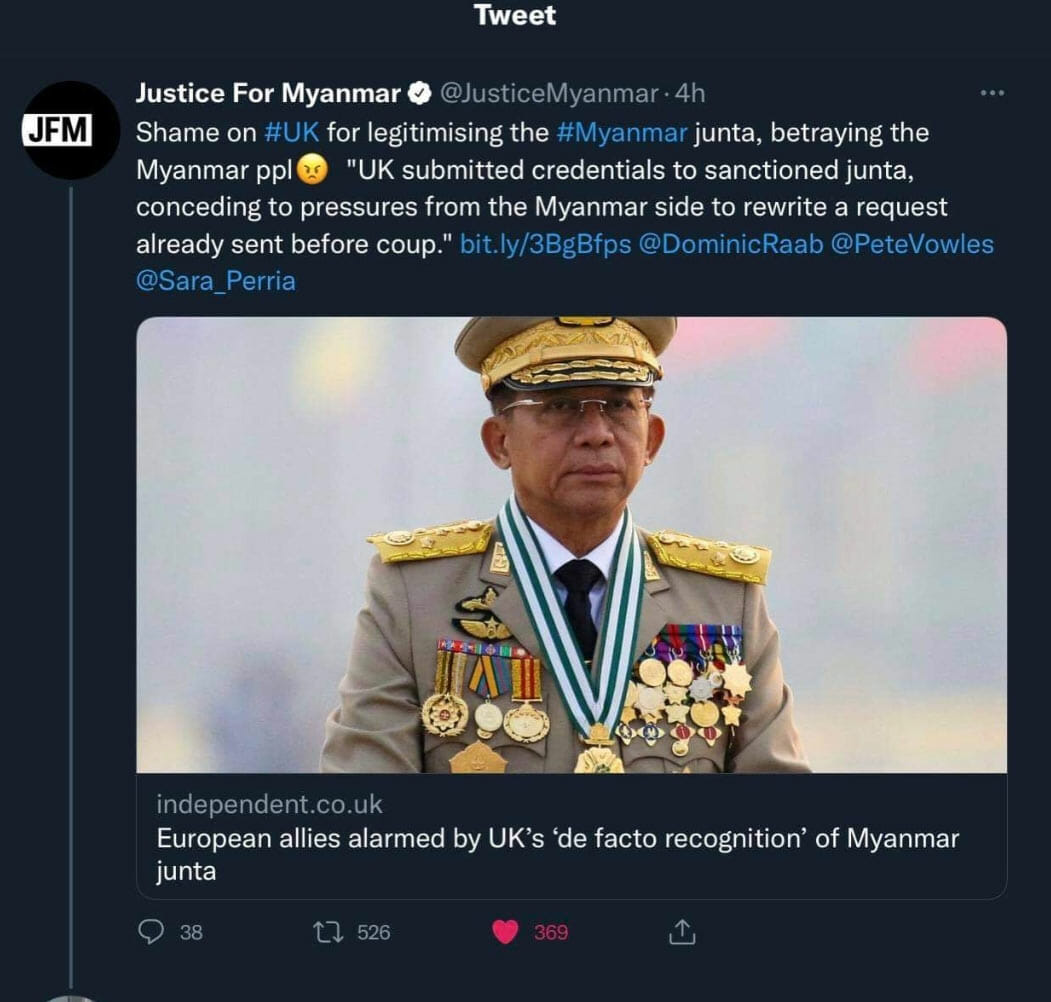 On the same FRC Genocide Memorial Event, Dr Katherine Southwick, another Yale-trained American legal scholar who warned of genocide against the Rohingya as early as 2014, vented her frustration.  Southwick said to the Facebook LIVE audience of 20,000+ viewers yesterday, “so with frustration with the international community’s own lack of accountability, yet with hope and gratitude, the international community must do nothing less than acknowledge genocide and renew our solidarity and support for the Rohingya and equal rights for all in Myanmar.”

Taking a non-legal perspective, Gayatri Chakravorty Spivak, the leading scholar of post-colonial studies and University Professor in the Humanities at Columbia University in New York, was emphatic with her demand for legal acknowledgment of genocide – which Rohingya have long been subjected to – when she invoked “common sense”.

The Indian scholar told the worldwide audience at the FRC Genocide Memorial Facebook LIVE yesterday thus: “I want to speak to my Rohingya brothers and sisters and talk to them about a possible future.  It is the unacknowledged genocide that has made it impossible for me to do what I want to do today.  I don’t think our conscience needs to go to legal definitions to acknowledge that the Rohingya is killed simply because she is a Rohingya.  By common sense, that is genocide.  But we must have an international legal acknowledgment in order for the possibility of legal redress to begin.”

While Rohingya – and their international friends – worldwide mourned the mass-death and destruction of numerous victims raped, maimed, slaughtered, and otherwise genocidally purged – and lamented the absence of any effective acts by the “abstract international community” – to borrow Spivak’s coinage – General Sadat, a US-trained commander in the Afghan National Army, was writing in the New York Times, with (justified) anger towards the United States government for having abandoned Afghan people.

The general writes, “I am exhausted. I am frustrated. And I am angry.

President Biden said last week that “American troops cannot and should not be fighting in a war and dying in a war that Afghan forces are not willing to fight for themselves.

It’s true that the Afghan Army lost its will to fight. But that’s because of the growing sense of abandonment by our American partners and the disrespect and disloyalty reflected in Mr. Biden’s tone and words over the past few months.”

The betrayal and a palpable sense of abandonment that the wretched of the earth who struggle for their right to life and liberty, have felt towards the liberal West in general and the United States in particular, with the latter’s signature honey-tongued support for human rights and “the rule-based international order” is nothing new.

In the early years of the Cold War, after having made promises of solidarity which they never intended to keep, the United States (and western allies) abandoned thousands of Hungarian rights activists in the wintery month of November 1956.

Almost 20 years ago, Matthew Daley, the then serving as the Deputy Assistant Secretary of State in the Bureau of East Asian Affairs at the United States State Department, pointedly warned me against trusting and relying on his employer for the Burmese liberation struggle, in our one-on-one meeting in his office at Foggy Bottom in Washington, DC:

“My government’s Burma policy is unconscionable. We made empty promises to the Hungarian democrats in 1956. Then when they were slaughtered (by the Soviets), we did nothing. So, you Burmese must find your own solutions.” 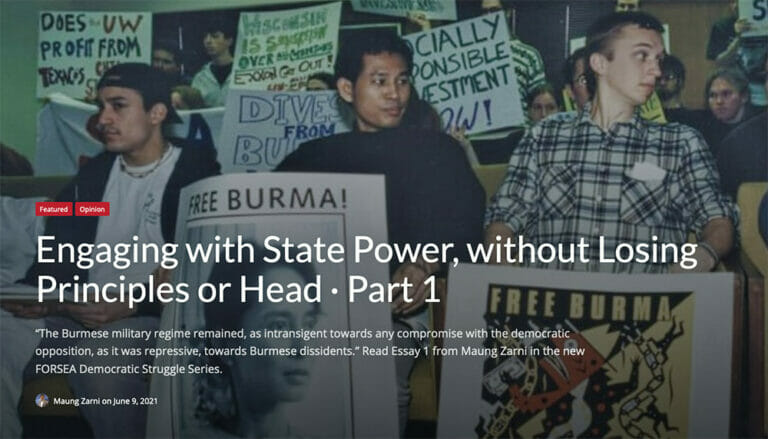 But it’s one thing for the United States and its British poodle across this side of the Atlantic to abandon dissidents worldwide against dodgy regimes during the latter’s hours of needs, be they Hungarians, South Vietnamese or, presently, pro-human rights and anti-Taliban Afghan peoples.  It is altogether another moral low for the British and American officials and leaders to coordinate acts of genocidal denial as they have done with their official statements on the 4th anniversary of “Ethnic Cleansing” in Rakhine State. 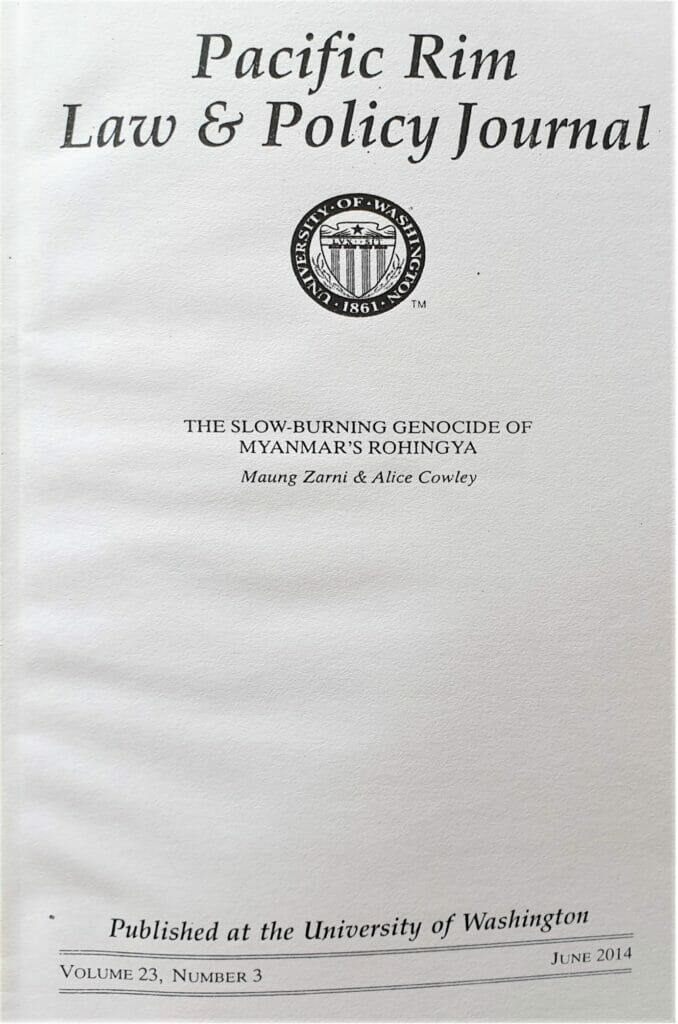 Ten years ago, my own research colleague and wife Natalie Brinham (pseudonym Alice Cowley) and I conducted a 3-year pathbreaking study based on Rohingya survivors in Malaysia, India, Bangladesh, Saudi Arabia and Myanmar, and we reached unequivocal conclusion that Myanmar has institutionalized the physical destruction of Rohingya minority, starting with the destruction of their group identity and history centuries before Burma or Myanmar came into existence in 1948. We published our findings as the commissioned peer-reviewed article in the Pacific Rim Law and Policy Journal of the University of Washington School of Law in the spring of 2014.

As a matter of fact, even Public International Law and Policy Group (PILPG) the Washington law firm which US State Department hired to do the forensic investigation of the representative sample of 1,000 Rohingya survivors who took refuge in Bangladesh in 2017, went public with the genocide findings. The PILPG’s Paul Williams told the press conference in Washington, “(i)t is clear from our intense legal review that there is, in fact, a legal basis to conclude that the Rohingya were the victims of war crimes, crimes against humanity and genocide.” For the Trump Administration decided to shelve its own commissioned report, when the findings did not suit US government’s agenda.

On this side of the Atlantic, the British politicians were no more receptive of facts and findings of Myanmar genocide, according to Queen Mary University of London Professor Penny Green, whose International State Crime Initiative, documented the evidence of the genocide in Countdown to Annihilation: Genocide in Myanmar (2015), who spoke on the FRC Genocide Memorial Event on Facebook LIVE this week.

There is then no wonder that the Taliban, the Xis and the Putins of the world of rogue regimes pay scant attention to the Anglo-American joint barking of democracy, human rights, or rule of law.   Nor do these rogue regimes think twice before they commit mass atrocities.

The ugly truth is these Western and Eastern birds of the same feather flock together on the Security Council, where they all take turns denying war crimes, crimes against humanity, and genocides or flouting any inter-state treaty obligations, depending on their conflicting interests.

Those in high offices who have been entrusted to ensure peace, security and well-being of humanity at large turn out to be the worst enemies of We the Peoples.