Based on our shared democratic values and concerns for China’s anti-democratic, anti-people and anti-Environment policies in Southeast Asia, FORSEA stands in solidarity with the freedom-loving people of Hong Kong.

FORSEA, a grassroots network of democrats and rights activists across Southeast Asia, unequivocally condemns Hong Kong administration and security forces for the excessive, unjustified and unprovoked use of organized violence against the thousands of citizen-activists who took to the streets of Hong Kong to protest the introduction of the Extradition Bill at the China-backed legislature.

The protesters and the people of Hong Kong who quietly support the protests fear the dire consequences of the Bill – that proposes to extradite Hong Kong citizens to be tried in China’s courts on the “mainland” – for citizenry at large including rights activists, journalists and critics of China. The bill is likely to be enacted into a law by Chief Executive, Carrie Lam, Hong Kong’s proxy ruler for CPC. In his recent CNN interview, the renowned Chinese artist and activist Ai Wei Wei pointed out the absence of rule of law and independent judiciary in the mainland in offering his support for the protests in Hong Kong. 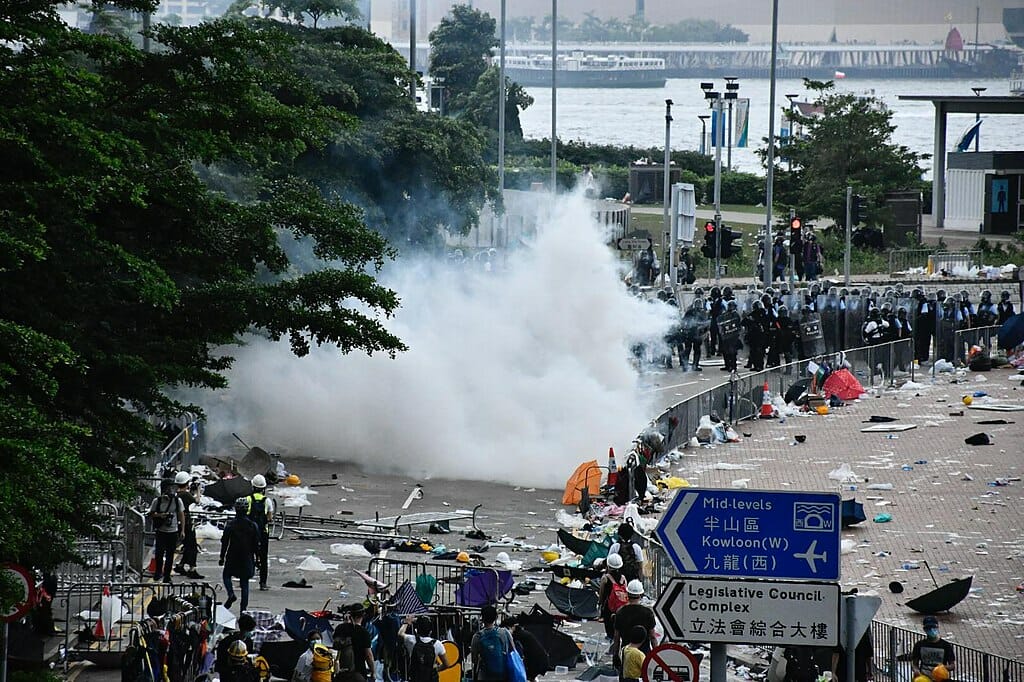 Tear gas fired by the police to the protesters in Tim Mei Avenue at demonstration against extradition bill, 12 June 2019. Photo: Wikipedia Commons

Hong Kong people’s protests that came on the heels of the 30th anniversary of the Tiananmen Square massacres on 4 June 1989 are an inspiring reminder that no matter how powerful, technologically advanced, organized and repressive a regime may be, the popular longing, demand and struggle for civil and political liberties cannot be crushed in the long term.

FORSEA is inspired by and applauds the indomitable spirit of resistance on display in the streets of Hong Kong. As Southeast Asia’s grassroots activists and democrats, FORSEA has deep concerns for the profoundly negative role the new, aggressive and totalitarian China is playing in our respective countries across the region, particularly in Cambodia, Laos, Indonesia, Myanmar, Malaysia and the Philippines.

Based on our shared democratic values and concerns for China’s anti-democratic, anti-people and anti-Environment policies in Southeast Asia, FORSEA stands in solidarity with the freedom-loving people of Hong Kong.