Vajiralongkorn is an ambitious king, he has also become increasingly politically savvy. But he is not alone in the world of ambitious leaders. New leaders, like Thanathorn, are equally ambitious. 2020 could be the year when the two collide.

The Thai crisis has been ongoing since 2006 – the year when Prime Minister Thaksin Shinawawatra was toppled in a military coup. Then from 2006 to 2020, Thailand saw six governments, six prime ministers, a conflict with its Cambodian neighbour and a brutal deadly crackdown on red-shirt demonstrators right in the heart of Bangkok. More drama would follow.

In 2014, the Thai military staged another coup. This time, it overthrew Thaksin’s sister, Yingluck. The coup, as I argued elsewhere, was a plot designed to handle the imminent royal succession. King Bhumibol Adulyadej had been on the throne since 1946. There for several decades, Bhumibol was able to dominate Thai politics with the backing of the network monarchy of which the military had become a major part. With his advancing years,  Bhumibol’s ill health began to worry members of the network monarchy. The end of the Bhumibol era loomed large. 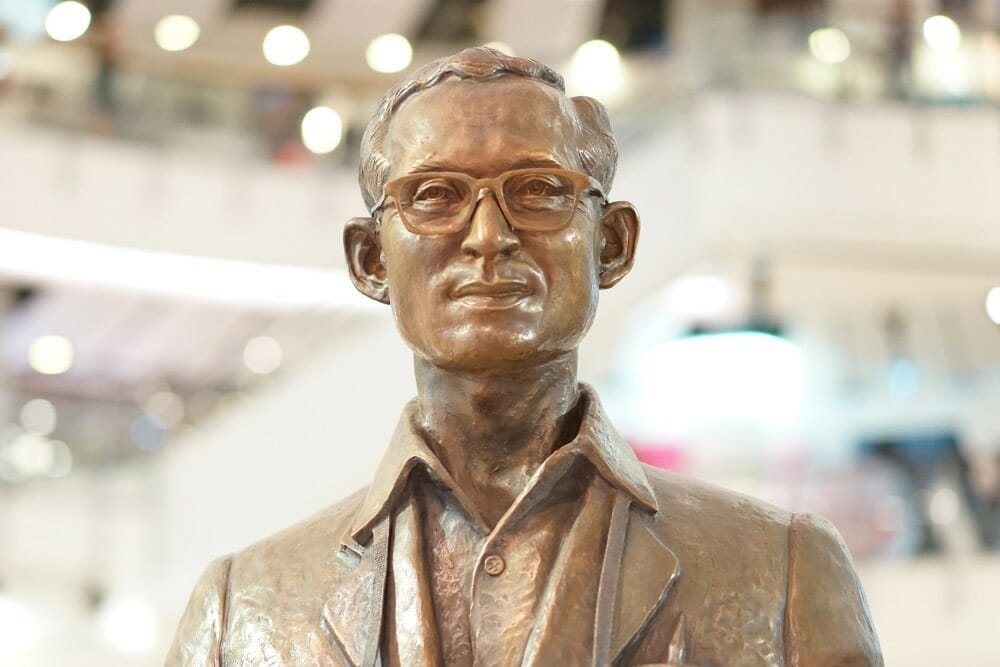 The statue of King Bhumibol is displayed at the Central World Plaza, Bangkok in Thailand, for people to remember. Image: ThxBomp / Shutterstock.com

The Thai traditional elites were anxious about the departure of Bhumibol. They feared that the new king, Vajiralongkorn, Bhumibol’s son, would not be able to provide the same kind of security and interests for them. This anxiety drove them to stage a coup in 2014 to ensure a smooth royal transition. In the aftermath of Bhumibol’s death, Vajiralongkorn was crowned, Putting to bed rumours that he might give up the throne to pave the way for a more popular choice, Princess Sirindhorn, his younger sister.

It has been more than three years since Vajiralongkorn began his kingship. Thailand has changed little. In the past few years, Thais have witnessed the consolidation of royal power. Vajiralongkorn moved to reorganise the power structure within the palace even before his father passed away, part of this restructuring was the emasculation of the Privy Council.

The Privy Council was once a powerful institution serving as an engine driving the network monarchy. General Prem Tinsulanonda, former prime minister and former army chief, was then the president of the Privy Council. However, it was an open secret that Prem and Vajiralongkorn did not get along. So with Vajiralongkorn taking control of the Privy Council, it not only served to augment his own power, but also allowed the removal of his political enemies in the process.

Vajiralongkorn requested that the constitution to be amended in provisions related to royal powers. This eventually allowed him to reside in Germany full time without being needed to return to Bangkok or appoint anyone as his regent. He handpicked the new army chief, General Apirat Kongsompong, who ticked all the boxes as a strident royalist. Upon assuming his position, Apirat threatened the public with the statement, “A coup is necessary should Thai politics turn chaotic.” 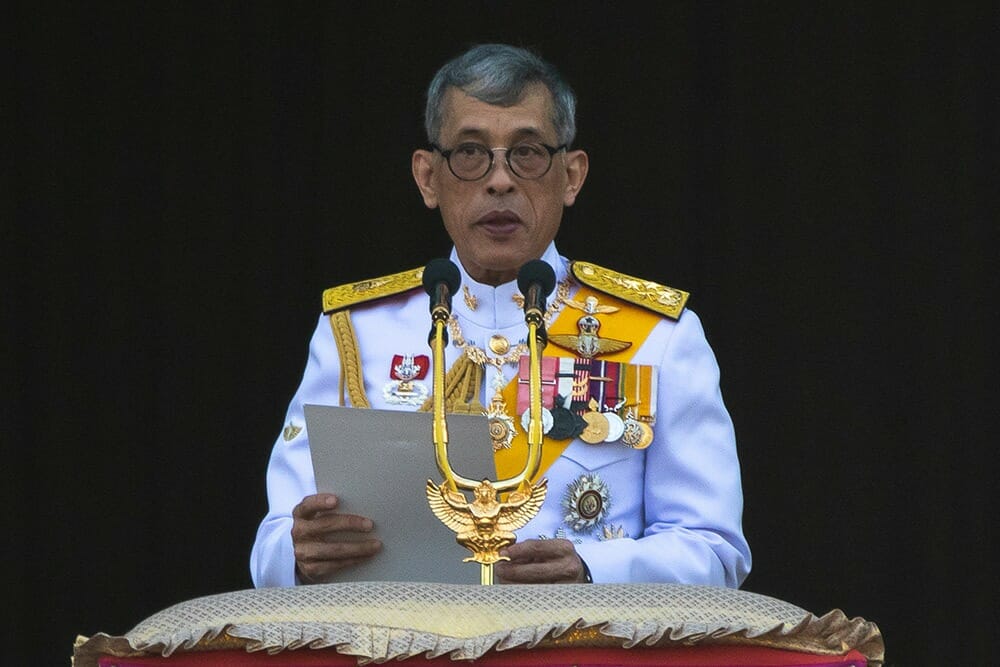 Bangkok, Thailand – May 6, 2019: Thailand’s King Maha Vajiralongkorn makes a speech from the balcony of Suddhaisavarya Prasad Hall of the Grand Palace during a public audience. Image: SPhotograph / Shutterstock.com

After the elections of 2019, Vajiralongkorn endorsed General Prayuth Chan-ocha, the coup leader and the prime minister under the military rule, to return to the premiership. His stamp of approval reiterated that Vajiralongkorn was comfortable working with an authoritarian regime. So far, he has shown no sign of support for the process of democratisation for his country.

The year 2020 will see Thai politics becoming increasingly intense. The Prayuth government has long been under a storm cloud for its inability to solve the country’s economic problems, nor been has it been able to improve the basic necessities of life for Thais. Not surprisingly, Prayuth’s popularity has nosedived. This suggests he might be shown the door this year with a replacement stepping in as prime minister. Rumours grow in Bangkok that General Apirat could replace Prayuth for the top job. Surely, this move will need to be royally endorsed. 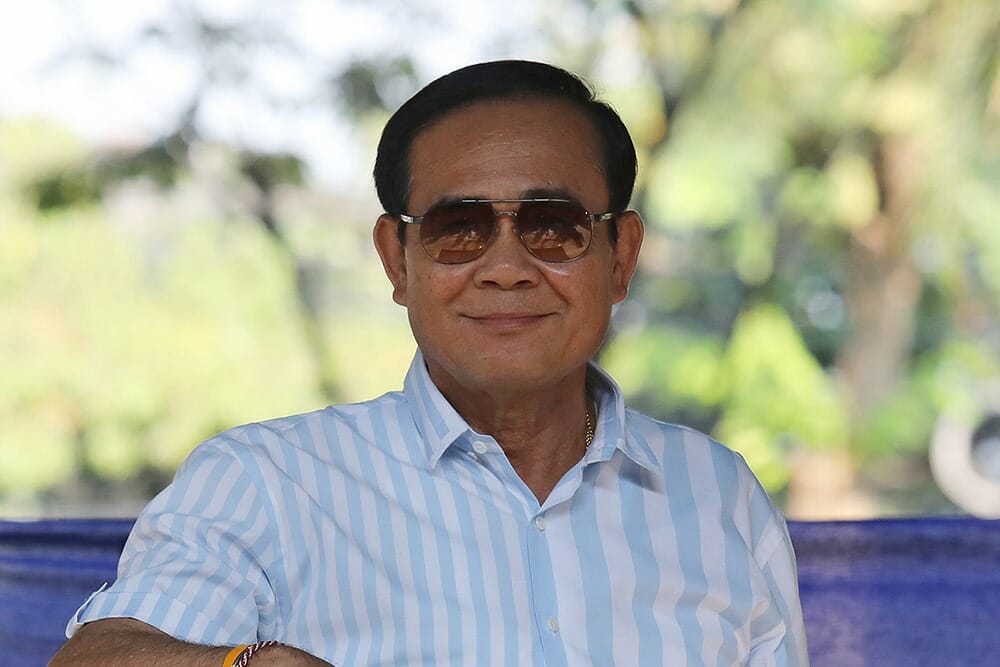 Meanwhile, on the opposite side, the rising Future Forward Party may play a greater role in shaping Thai politics. The party won impressively in the recent elections. Yet, the conditions within the constitution serve to obstruct the party in leading the government. Hence, the Future Forward Party was compelled to remain in the Thai political ring as opposition.

The Future Forward Party has performed well in that role; actually, it has done a little too well and traditional elites are looking on them as a challenge that has to be eliminated. Just as 2006 saw the forced exit of Thaksin, then 2020 will probably mark the end of the Future Forward Party. The question is whether the party will rise from the ashes. What will be the new role of its ever-charming leader, Thanathorn Jungrungruangkit?

Within the establishment, the elites know of the republican leanings of Thanathorn. Although he has avoided projecting this image, his enemies have already planted a story of his insidious subversion, for this would give them legitimacy and the legal power to remove Thanathorn from the political space. 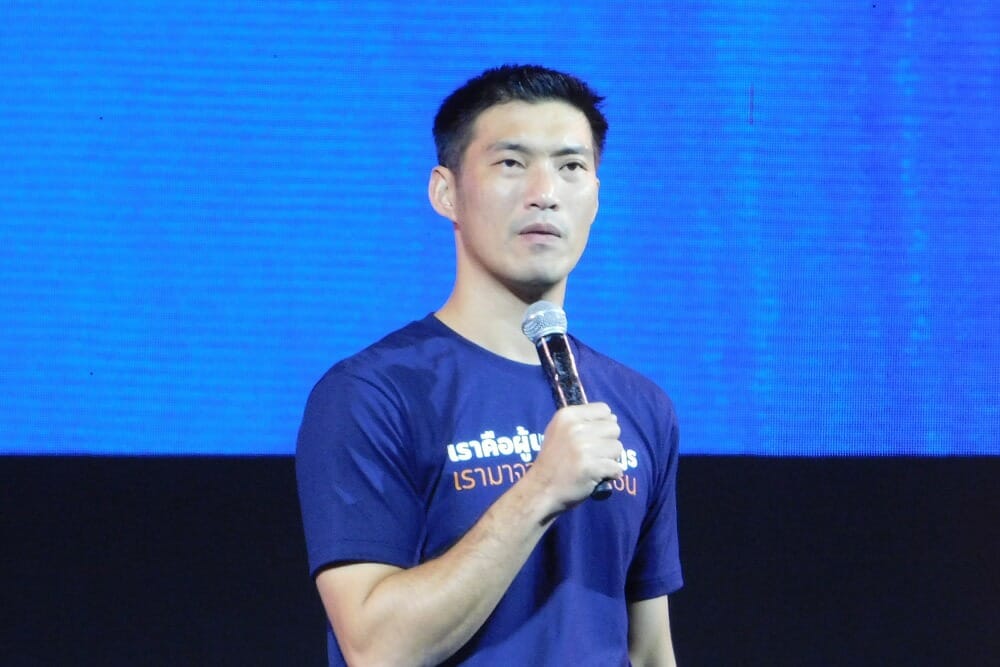 Thanathorn at a party meeting in 2019. Image: Wikipedia Commons

But things might not be so easy in 2020 as Thanathorn has the support of the youth. This was plain at a rally in Bangkok last month. There was an undercurrent of protest among the young activists, they have little memory of the greatness nor reverence of past Thai kings. Their pro-monarchy stance is no longer a given. The can be seen in the Twitter world with open criticism of the monarchy – Thais are more critical than ever in their opinions about the monarchy.

At this juncture it remains to be seen if Thanathorn can exploit this trend for the benefit of the country’s democracy. Vajiralongkorn is an ambitious king, he has also become increasingly politically savvy. But he is not alone in the world of ambitious leaders. New leaders, like Thanathorn, are equally ambitious. 2020 could be the year when the two worlds collide. If the democratic side wins, Thailand will be a better place. But if the monarchists win instead, the space of democracy will shrink, if not totally disappear.