A Consensus on the Efficacy and Value of ASEAN Summit on Myanmar: Understand & Appreciate Myanmar People’s Analyses of Their Oppression

“ASEAN is not capable of dealing with Myanmar’s Civil War/Revolution while the UN is abdicating its responsibility”. An in-depth Facebook LIVE discussion – a post mortem discussion – on the Five Point Consensus from the recent ASEAN Summit on Myanmar with views from three top discussants: Tan Sri Dr Sayed Hamid Albar, Professor Michael W. Charney, and Dr Khin Zaw Win.

FORSEA Dialogue on Democratic in Asia hosted an in-depth Facebook LIVE discussion – a post mortem discussion – on the Five Point Consensus from ASEAN Summit on Myanmar (Crisis) hosted in Jakarta by Indonesian President Jokowi on 24 April. 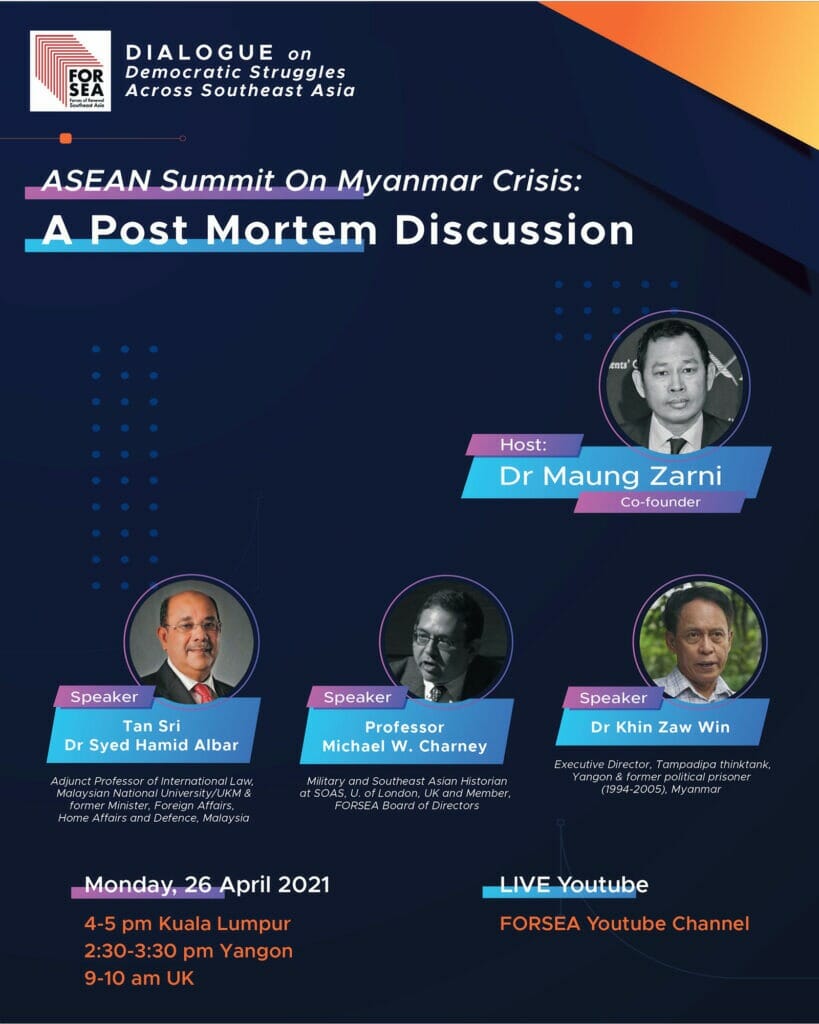 Flyer from the event.

The Malaysian scholar, diplomat and politician Dr Albar pointed out the fundamental problem of the summit being that ASEAN is a good platform for stability and economic development, but it is in the uncharted territories with Myanmar is undergoing nothing less than total social and political revolution.

Professor Michael W. Charney offered a historical perspective from other civil war or revolutionary situations wherein communications with the oppressive militaries were meaningful only when the killing machine was vastly weakened and the militarists were no longer in control of the turn of events (against them). Besides, Charney spoke about the practical need for building alternative institutions such as the Federal Army – very much in popular demand among the public in Myanmar – which goes beyond coordination among different existing Ethnic Armed Organizations, created for self-defence of their respective communities.

Speaking from Yangon, the Burmese dissident Dr Khin Zaw Win observed pointedly the complete disconnect between international experts and diplomats and the overwhelming public opinion on the ground in terms of how a single reality – a society on the cusp of the Zero-Sum Revolution against the national military that has morphed into “nothing but armed terrorist gang”. He took issue with the view that the Burmese military is a part of the solution, and therefore must be a part of the problem. For the Burmese society is engaged in the secular equivalent of excommunicating the Tatmadaw or military totally while undergoing a transformative process of becoming inclusive and communal – as opposed to racist and divisive.

Using the medical analogy the FORSEA host Dr Maung Zarni characterized the murderous military called Tatmadaw as the cancer in Myanmar’s politics, economy and society, hence the removal of it for Myanmar patient to live on. He pointed out the need for ASEAN and international diplomats to understand and appreciate the Burmese people’s grounded view and analyses of their own predicament under the boot for 3-generations since 1962.