Dams Development & Disaster on the Mekong

Given the Mekong’s critical state arising from 11 Chinese dams and the recent Xayaburi dam in Lao, a moratorium on all hydropower construction on the Mekong as part of a “New Deal to Save our Mekong” is needed now before it’s too late.

Among the great rivers – the Amazon, the Nile and the Ganges – the freshwater fisheries of the Mekong ranks as the most important in the world. It has long sustained the food security and livelihoods of people living in this river basin which now adds up to 72 million Lao, Cambodians, Thai and Vietnamese.

It should appear obvious to any regional policy–maker that any development policy would endanger the great biodiversity and natural resources of the river could result in long-term losses for livelihoods, nutrition and food security. But there is no evidence that any leaders, international donors or the Mekong River Commission, have expressed any critical concern, that a cascade of dams would have a disastrous socio-economic impacts on fisheries, food security and agriculture.

But many scientists did predict it. And indeed the disaster predicted has come about. China and Laos have engaged in a headlong rush to dam every river and in particular the mainstream Mekong.

In July 2019, villagers surveyed the protruding sand banks of the once mighty Mekong, in places reduced to a trickle. It was the worst-ever drought since records began. Many people pointed to the 11 dams upstream in China as the main cause of their woes. 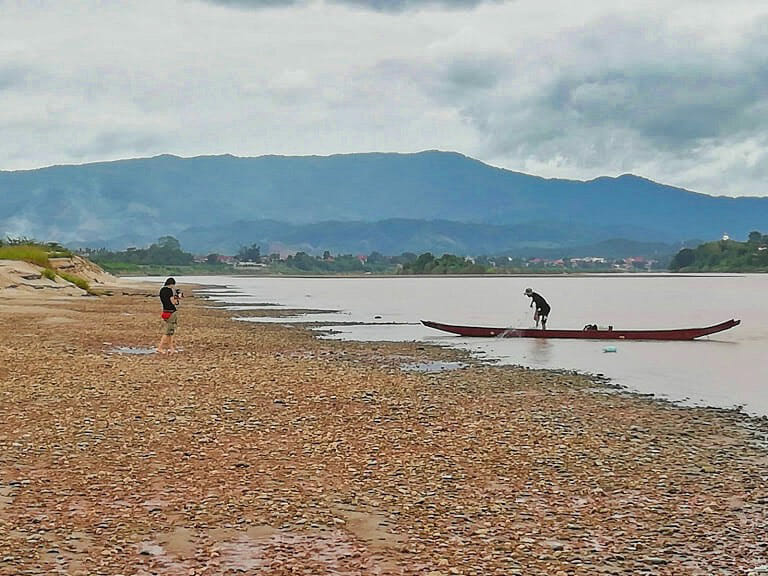 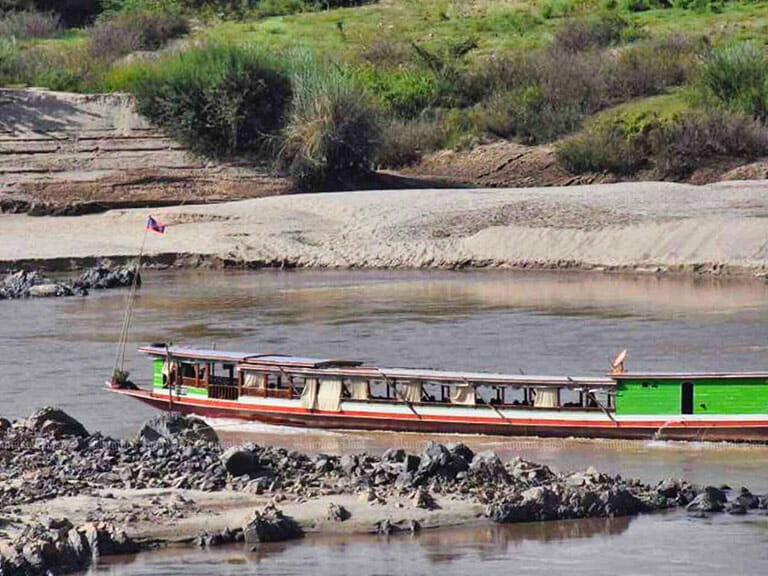 It is precisely the frenzied development of hydropower along the Mekong both in China and in Laos during the last 15 years, that has plunged the river into what is a massively damaged ecosystem, endangered food security and produced the present crisis.

The recommendations of the World Commission on Dams (WCD) went unheeded.1 Even worse the first SEA environment assessment on Hydropower Impacts on the lower Mekong commissioned by the MRC (Mekong River Commission 2010) was quietly sidelined in spite of the official endorsement of one member state Vietnam. That SEA report strongly recommended “ a moratorium for 10 years on all dam building on the lower Mekong”.2

This river groaning from bearing the burden of so many dams upstream, and suffering from a disastrous loss of sediment that turned the natural colour of the Mekong  – a muddy brown – to an alien blue. This phenomenon is known to scientists as “hungry River” disease, when a river is starved of nutrient rich sediment.

China denied that their cascade of dams had any impact and shifted the blame to the lack of rainfall and climate change.

Yes, the Mekong region is also threatened by climate change, and erratic rainfall. Other regional leaders have also tried to deflect the blame away from hydropower.

Contrary to China’s denials, a scientific report from Eyes on Earth concludes “from September 2019 China’s portion of the upper Mekong received uncommonly high levels of rainfall, and yet its dams blocked or restricted more water than ever before as downstream rivers suffered an unprecedented drought.“

The result of blocking the water flow downstream for six months in 2019 according to US-based Stimson Foundation was that “China’s dams held back so much water that they entirely prevented the annual monsoon-driven rise in the river level at Chiang Saen in Thailand. This has not happened since modern records have been kept.”3

The evidence is based on the landmark Eyes on the Earth report “Monitoring the Quantity of Water Flowing Through the Upper Mekong Basin Under Natural (Unimpeded) Conditions” April 16, 2020.4 The Eyes on Earth /study used satellite data taken with Special Sensor Microwave Imager/Sounder (SSMI/S) technology to detect water on the surface from rain and snowmelt in China’s portion of the Mekong River Basin from 1992 to late 2019.

It then compared that data with river-level readings by the Mekong River Commission at Thailand’s Chiang Saen Hydrological Station, the closest station to China, to create a predictive model of “natural” levels for the river and to compare with the water levels in 2019 impeded by the construction of 11 Chinese dams.

China denies it, but has never shared vital data concerning their water management decisions with downstream countries and the Mekong River Commission. The data they do share about water levels and opening dam gates is always partial information and there is little to no transparency. (China has always declined to be a member of the MRC whose 4-members are Laos/Cambodia/Thailand & Vietnam.) 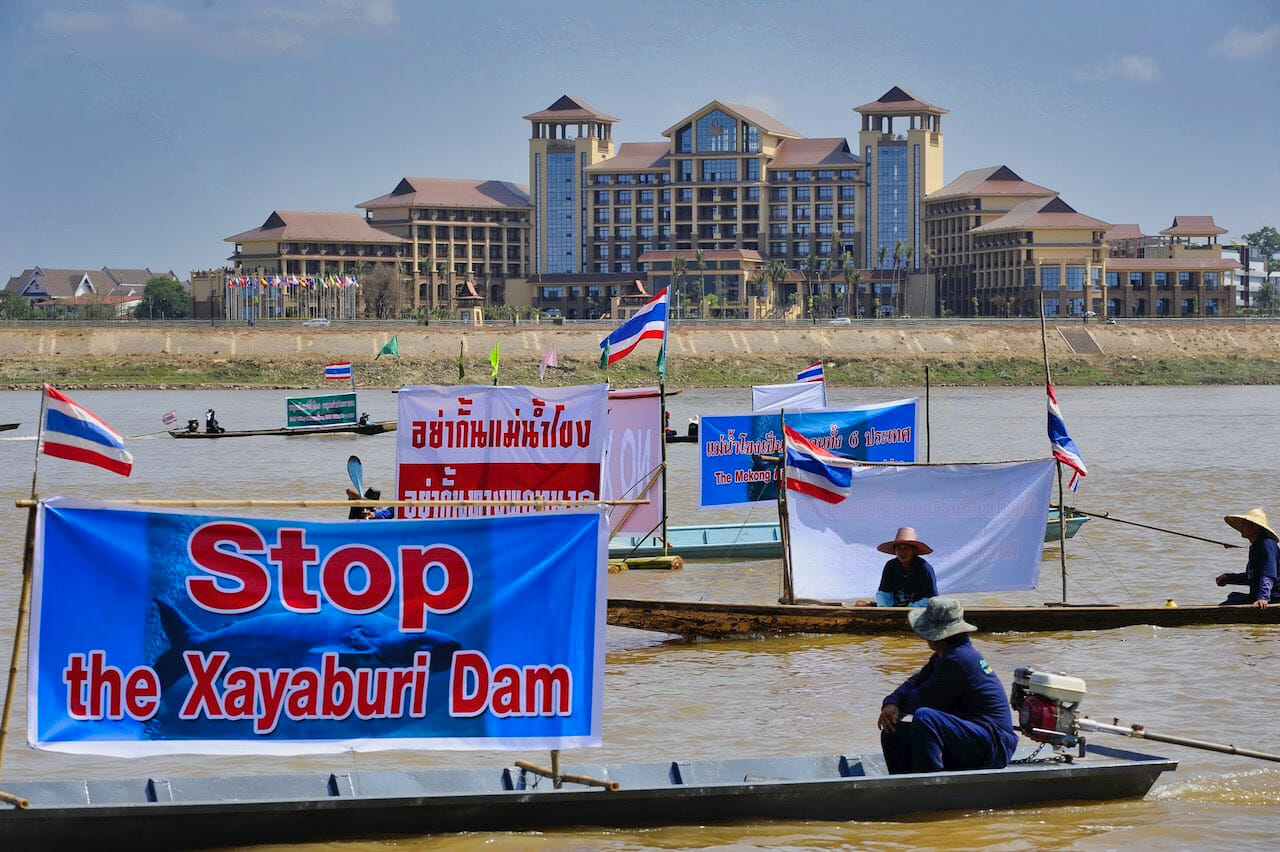 First the Eyes on Earth evidence needs to be used by lower Mekong countries and international agencies together with other scientific studies that have measured the damage done to the downstream, to lobby China for a “New Deal on the Mekong” pressing for transparency and greater respect for the water rights of the lower Mekong countries. It should also pave the way for a further Mekong agreement that China will in future act according to the equitable distribution of water resources of  the Mekong (a principle enshrined in the 1995 Mekong Agreement5 that created the MRC).

Vietnam as the incoming chairman of ASEAN and Thailand have a shared interest to lessen China’s stranglehold on the Mekong. Sadly Lao and Cambodia are so indebted to China, it will be hard to get them on board. Hanoi has already pledged to promote an ASEAN agenda that will give far more attention to Mekong issues.

The neo-liberal ideology of the IFC, the World Bank and US Aid have also acted complicity with the damming of the Mekong – not Chinese dams, but their own version a species called “sustainable hydropower” founded on the World Bank’s pet project the Nam Theun 2 dam in Laos.6 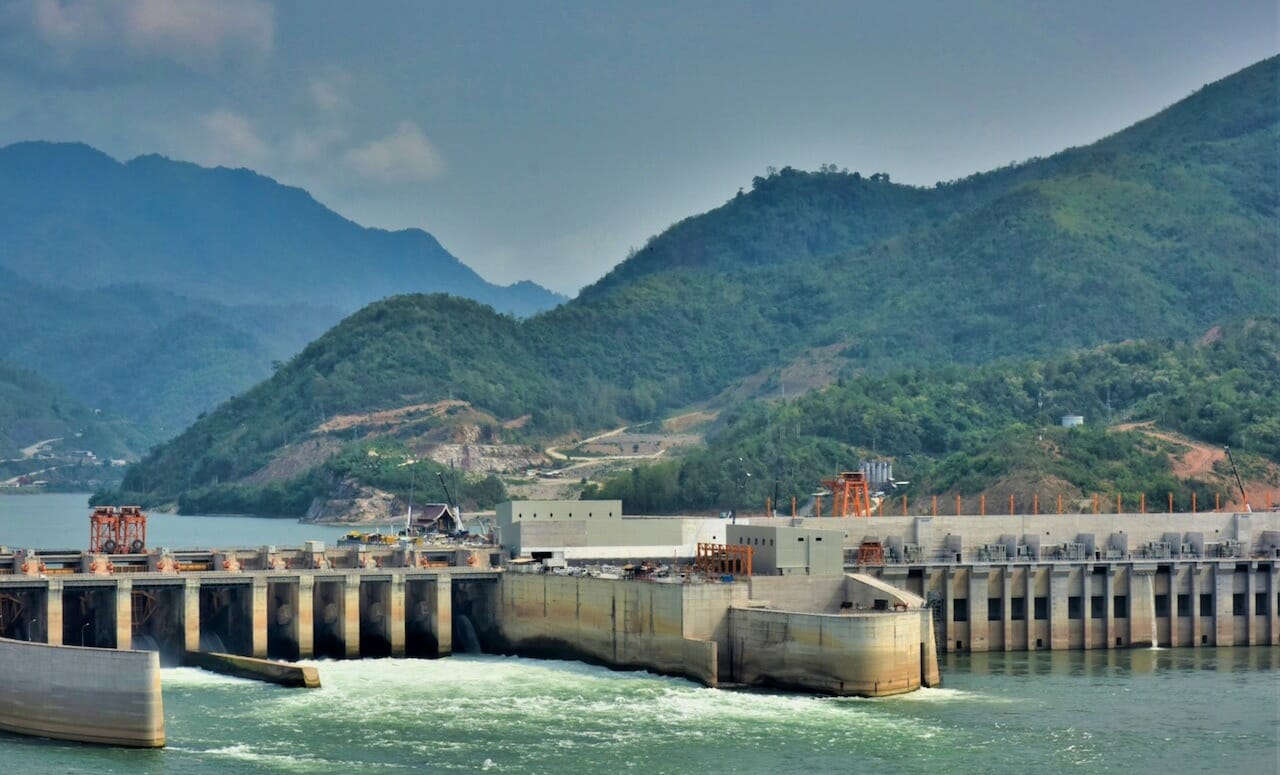 The Xayaburi Dam in 2019. The hydroelectric dam is situated on the Lower Mekong River, approximately 30 kilometres east of Xayaburi town in northern Laos. Commercial operation of the dam started in October 2019. Image supplied by Ch.Karnchang known as CK Power in Laos.

“Sustainable hydropower” was the mantra used to justify accepting dam projects on the basis of stakeholder engagement, EIA assessment, and mitigation of environmental harm. In reality nearly all the fisheries and other Mekong experts have pointed out that there is almost no scientific evidence that fish ladders and other mitigation measures ever work on tropical rivers.7

Veteran Mekong specialist and University of Sydney Emeritus Professor in Human Geography Dr Philip Hirsch told this reporter that “In 40 years of visiting dams, I have yet to see a dam on a tropical river where mitigation has worked.”

Given the Mekong’s critical state arising from 11 Chinese dams and the recently completed Xayaburi dam in Lao, the first in the lower Mekong, it is long overdue to seriously protect the ecosystem of the river, before it is too late. They need to follow scientific recommendations to stop the damming, and adopt a moratorium on all hydropower construction on both upper and lower Mekong as part of a “New Deal to Save our Mekong”.

Tom Fawthrop
Journalist and film-maker, Tom Fawthrop, is working on a new documentary about the Mekong called “A River Screams for Mercy”.

London-born journalist/ film-maker and NUJ member, Tom has reported on many of the major conflicts in SE Asia since 1979 and variously been based in Bangkok, Dili (East Timor), Manila, Phnom Penh and Chiang Mai.