The Royalists Marketplace stands for freedom of expression. Crude censorship from the Thai government crushes the freedoms that Thais are entitled to. In blocking the page, Facebook is cooperating with the authoritarian regime in obstructing democracy and cultivating authoritarianism in Thailand.

Facebook has accepted the request from the Thai government to block an access to my private group, called Royalists Marketplace, in Thailand. By the time it was blocked last night, August 24, 2020, there were 1,066,096 members, making it the most successful Facebook group in Thailand. 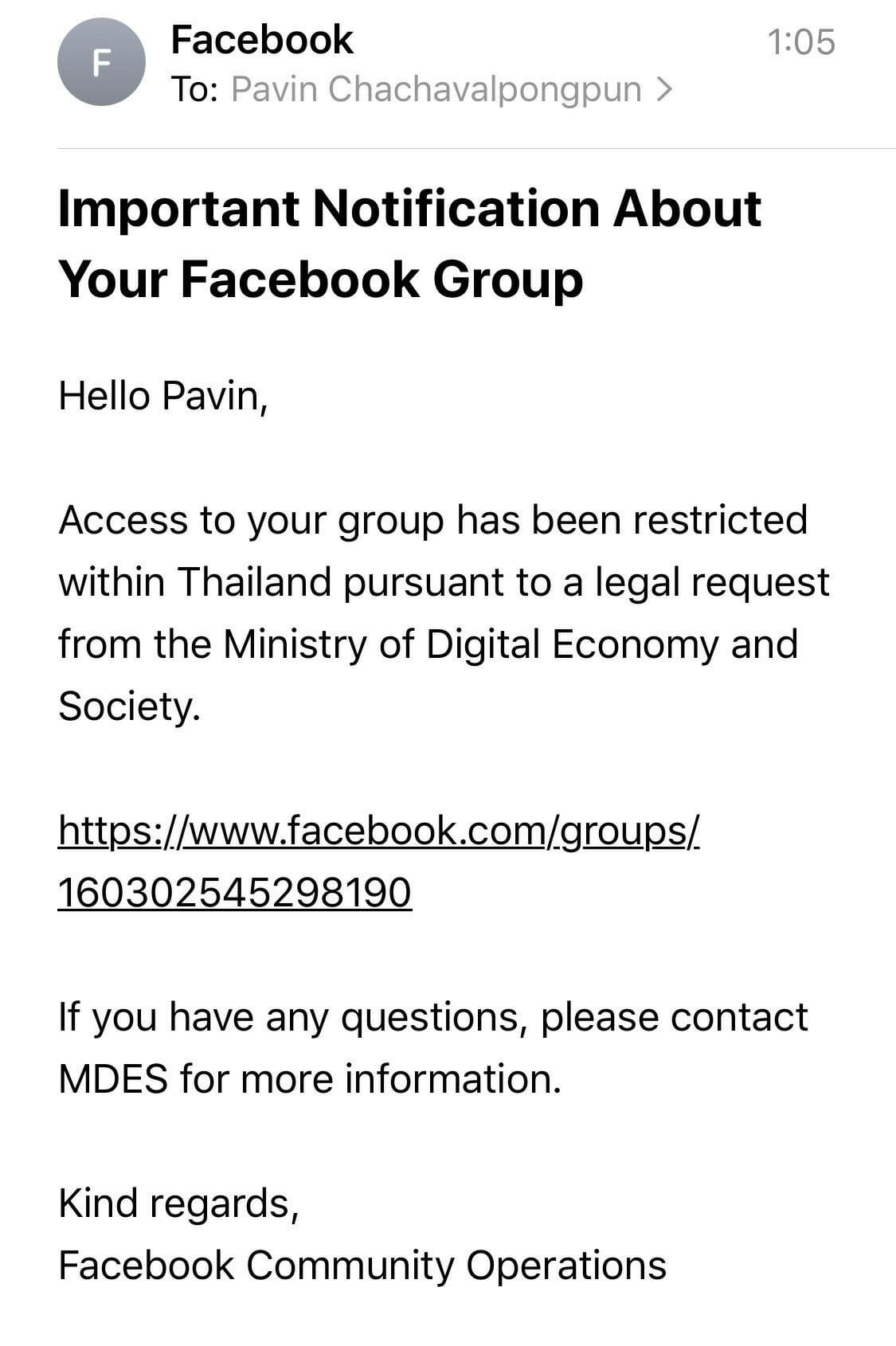 The Royalists Marketplace was set up on 16 April 2020, providing a space for genuine discussions about the monarchy, the topic perceived as a taboo. Over time, it played its part in supporting the student protests and endorse their proposal for immediate monarchical reform. One noticed the banner of the group at almost every protest venues across the nation.

Rising to become a challenge to the pro-monarchy regime, the Royalists Marketplace was soon targeted by both the state authorities and some vigilante groups. As the number of members grew in strength, the Ministry of Digital Economy and Society, a few days ago, decided to file a cybercrime complaint against me, the founder of the group, for creating a platform of discussion deemed critical of the monarchy. 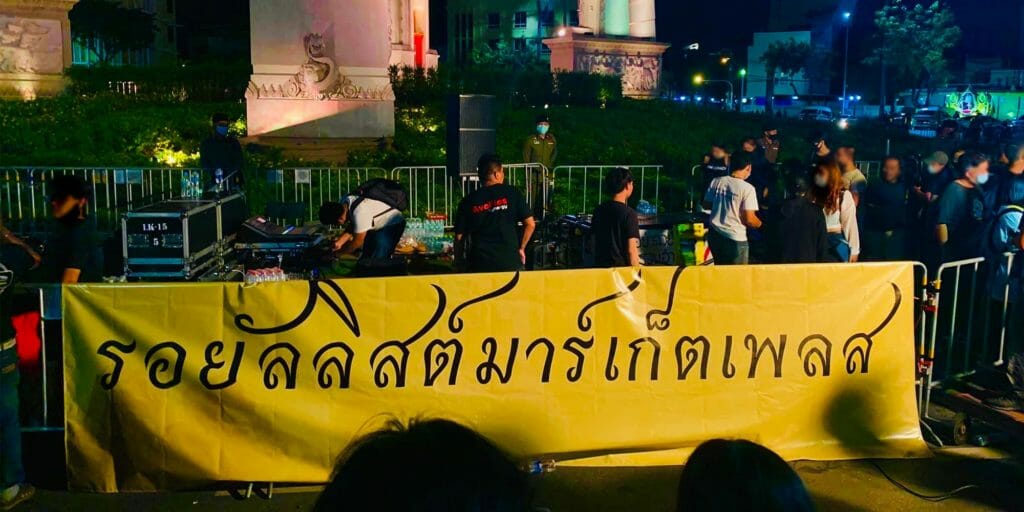 This act came after Facebook initially had not responded to the government’s request to shut the group down. But the Thai government moved a step further by directing legal action at Facebook too. It gave Facebook 15 days to comply with court takedown orders or face charges under the local Computer Crime Act, which carries a fine of up to 200,000 baht (US$6,367.40) and an additional 5,000 baht (US$159.18) per day until each order was observed.

I received a call from a Facebook officer based in Singapore to inform me of the company’s decision. The officer explained at length at it was a decision that could not be avoided, but refused to admit if this would further cultivate a norm of censorship in Thailand. And at 11pm Thailand time, August 24, 2020, access to was permanently blocked in Thailand.

Facebook sent a email to me to inform that, “Access to this group has been restricted within Thailand pursuant to a legal request from the Ministry of Digital Economy and Society”.

The government’s action is a result of daily protests from the students and anti-government protesters who have called for reforms of the monarchy. While it is true that the issue of the monarchy was aired in the public arena in the past, but the current move is the first of its kind in presenting the proposal in a very formal fashion, meant to be taken further for a real debate within the parliament. 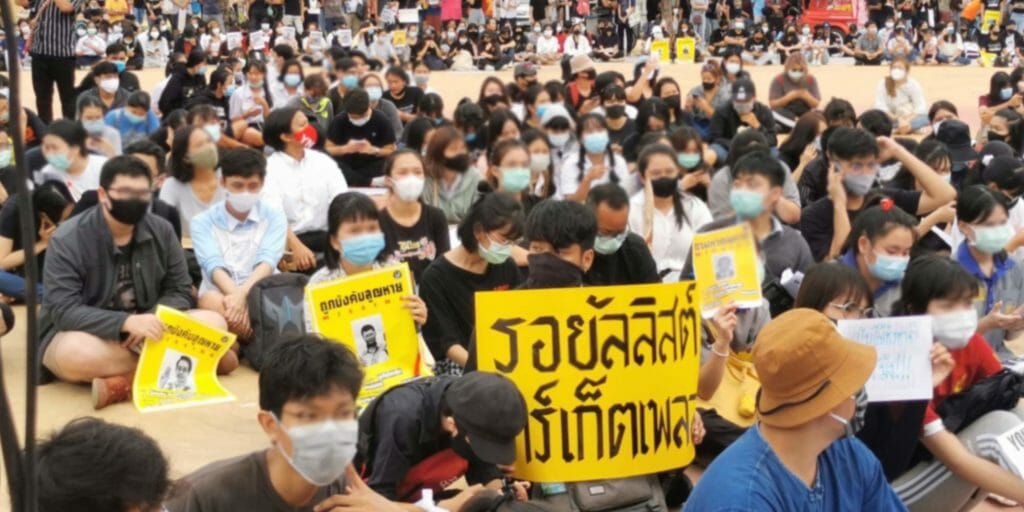 Read: Call for Urgent Monarchical Reform is behind the 2020 Thai Student Protests

The Royalists Marketplace is a part of the democratisation process. It is a space for freedom of expression. The government’s action is the crudest form of information censorship. It crushes the freedom of expression that we are all entitled to. By doing this, Facebook is cooperating with the authoritarian regime to obstruct democracy and cultivating authoritarianism in Thailand.

This is not the first time Facebook cooperated with undemocratic regimes of Thailand. It complied with the requests in the past and took down a number of contents related to the monarchy. Meanwhile, the Thai government has continued to crackdown on critical elements against the monarchy online.

Global Voices Advocacy reported ten years ago that Thailand’s Ministry of Information Communication Technology (MICT) and the Centre for the Resolution of the Emergency Situation (CRES), admitted to having blocked at least 50,000 websites and was adding 500 more per day. Since May 2010, it has been estimated that Thailand could be blocking 113,000 websites (Global Voices Advocacy 2010). In June 2010, the Thai cabinet approved the creation of a Bureau of Prevention and Eradication of Computer Crime (BPECC), purportedly to protect the monarchy. The new office has added to the censors already at the MICT, the CRES, the Royal Thai Police, the army’s ‘war room’ and the Ministry of Culture.

The situation has worsened following the 2014 coup when the National Council for Peace and Order (NCPO)—the governing body of the coup makers, closed down thousands of websites deemed threatening to national security and the monarchy. The blocking of websites was conducted under the martial law. Today, the Ministry of Digital Economy and Society stands at the frontline in the battle of the information in the cyberspace.

On learning of the decision from Facebook, I went on the create a new group under the name “Royalists Marketplace-Talad Luang” (the Thai translation of the English name). Overnight, the members grew to more than 400,000. What the government fails to realise is that the group has re-emerged as a symbol of free speech, in a country where conversation about the monarchy has long been kept in a closet. Younger generation in Thailand is hungry for an open discussion of this taboo topic, hence seeing the blocking of an access to this group as a threat to their future.