Ruling Cambodia for four decades, for Hun Sen, to have democracy in Cambodia is to have him in power forever. Warning Cambodians, he says the country will be at ‘WAR’ if he loses the election.

It is generally agreed that democracy is a contested concept with many forms and models. In Southeast Asia democracy can sometimes have a more daunting narrative in political terms. Rather than seeing democracy as ethical, with motivational intents, decent values of a free and equal citizenship, most Asian leaders see it as a form of Western civilisation imposed upon them. Therefore, the Lee Kuan Yew (and other’s) hypothesis of Asian Values is rhetorically extolled, particularly among authoritarian politicians. Although serious debate of this Asian Way has ended in academia, it is frequently used as deflection mechanism by leaders of ASEAN countries.

Cambodia’s Hun Sen, for example, has proudly repeated that Cambodian democracy has Cambodian ways as he savagely attacks critics in the international community, namely the European Union and United States, who had the audacity to suggest how to put Cambodian democracy back on track. He alternatively praises unconditional Chinese aid, which, unlike Western aid, is not conditional on the improvement of human rights or environmental conditions. Meanwhile, Hun Sen repeatedly declaims himself as a protector of peace and stability. Without peace and stability, he elaborates, there is no democracy and development. For him, to have democracy in Cambodia is to have him in power forever. He continually warns Cambodians that the country will be at “war” if he loses the election. He has already ruled Cambodia for four decades.

Despite warnings of dire consequences, Cambodian voters turned against him in an election that many independent observers questioned as free and fair. Both the national and local elections in 2013 and 2017 saw a significant decline of his popularity. Despite the opposition gaining support and closing in on his Cambodian People Party (CPP), the opposition Cambodian National Rescue Party (CNRP) still rightly questioned rigged electoral strategies, ranging from voter intimidation and de-registration, as well as vote buying and gerrymandering. Yet despite this, the opposition posted a significant threat to Hun Sen’s authoritarian regime.

Political Parties and Their Votes

Unlike any Cambodian party before, the CNRP had a solid political swell from the grassroots. This party came about following amalgamation of the two previous opposition parties – the Sam Rainsy Party and Human Rights Party – bringing together young and frustrated tech-savvy voters along with other disgruntled citizens. Hun Sen was ruthless in removing this threat. 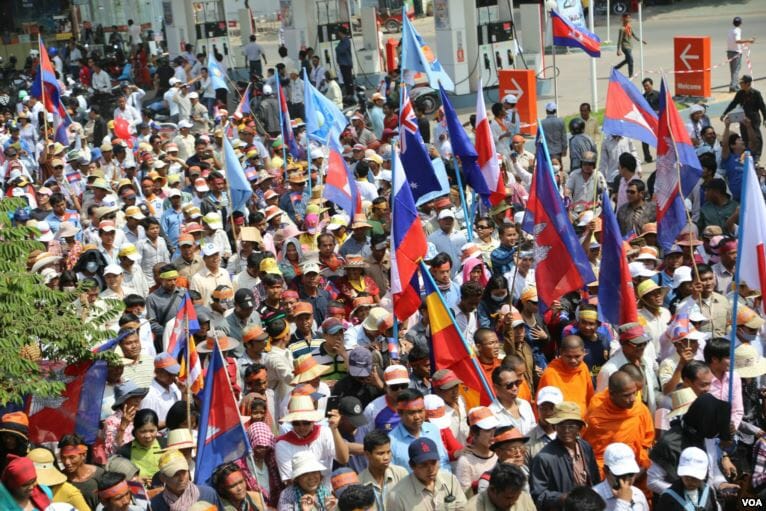 Sensing his power could be challenged, Hun Sen went on the attack and amended political party laws, arrested CNRP’s leader, dissolved the opposition party, and banned its 118 senior members from political life for five years starting from 2017. It turns out that parliamentarian immunity granted by the constitution is meaningless. Kem Sokha, the CNP former president, was arrested and sent to prison while Sam Rainsy fled to Paris. Most stunning was the relocation of CNRP seats to other unknown parties completely mocking the democratic process; the CPP under Hun Sen snatched all the local representative CNRP seats. Subsequently, he conducted meaningless election in 2018 and was declared the sole winner controlling all seats in the National Assembly and the Senates. 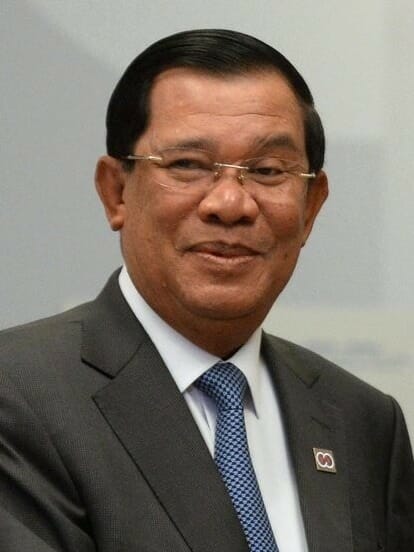 Hun Sen’s democracy is not only absence of a competitive opposition, but also independent media and a civil society voice. The two well-known English-Khmer newspapers (The Cambodia Daily and The Phnom Penh Post) were either forced to abandon publication or sell when faced with a huge tax bill. Local radio stations that normally relay Radio Free Asia and Voice of America were ordered to cease broadcast or face some kind of legal repercussion. Staff members of Civil Society working in the field of democracy and human rights were also the targets for legal attacks. Freedom of expression via social networks like Facebook is also under scrutiny. A number of Cambodians have already been arrested for comments on Facebook that the government says threaten social stability.

To protect his peace and democracy, Hun Sen vows to execute hundreds of people that he believes a threat. Furthermore, he appointed family members and associates to hold key party positions, in the military, and the judiciary. At the party convention in 2018, CPP recruited more than 300 new members adding up to nearly 900 members for its central committee. His eldest son, Hun Manet, was appointed to be a party permanent member. The second son, Hun Manith, was made the deputy of the party internal monitoring committee and the third son, Hun Many, was appointed as the deputy of the monitoring committee at the central committee. All of them also have a senior positions at the Ministry of National Defense and the National Assembly. Manet is a four-star-general and the deputy commander-in-chief of the Royal Cambodian Armed Forces (RFAC). Manith is a brigadier general in charge of the intelligence department at RFAC and Many is a colonel in the bodyguard unit. He is also a member of parliament, chair of Parliamentary Commission on Education, Religion and Cult, and president of Youth Federations of Cambodia, which recruiting youth anywhere under the party youth wing. In addition to the tight control of the military apparatus and the unquestionable support from them, most members from the lower to the supreme courts belong to his party. It is actually a permanent member from the ruling party who presides the Supreme Court that dissolved the opposition party.

The above briefly illustrates how Hun Sen defines his democracy. The EU is revising its “Everything But Arm” trade preference and some lawmakers in the United States are proposing bills that could lead to sanction for Hun’s family and associates. Cambodians, although physically and psychologically oppressed, have already expressed their dissatisfaction through the polls. Yet elections did not work. For democracy to flourish, democratic values and belief in the process are clearly not enough to bring change.

Chum Chandarin
Chum Chandarin is a PhD candidate at a European University. His dissertation is about political decentralization in Cambodia. chandarinchum@gmail.com