In Indonesia the events of 1 October 1965 were followed by a campaign to annihilate the Communist Party and its alleged sympathizers. It resulted in the murder of an estimated one million people – a genocide that counts as one of the largest mass murders since WWII and the incarceration of another million, many of them for a decade or more, without any legal process. This purge was justified and enabled by a propaganda campaign in which communists were painted as atheist, hypersexual, amoral and intent on destroying the nation. To this day the effects of this campaign continue to be felt, and its victims are denied the right of association and freedom of speech. 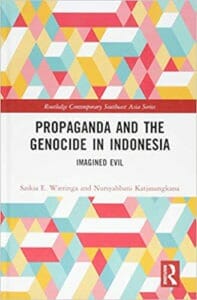 This book presents the history of the genocide and propaganda campaign and the process that led to the establishment of the International People’s Tribunal on 1965 Crimes Against Humanity (IPT 1965), which was held in The Hague, Netherlands, in November 2015. The authors, a Dutch academic and chair of the Foundation IPT 1965 and an Indonesian human rights lawyer and the general coordinator of the IPT 1965, examine this unique event, which brought these crimes before an international court for the first time, and they consider its verdict. They single out the campaign of hate propaganda that provided the incitement for the murder of so many Indonesia and ask why this propaganda campaign continues to be effective. The first book on this topic, it fills a significant gap in Asian Studies and Genocide Studies.

The International People’s Tribunal for 1965 addressed the many forms of violence during the period of the massacres of 1965-66 and beyond in Indonesia. It was held in The Hague, The Netherlands, in November 2015 to commemorate 50 years since the killings began. The Tribunal, as a people’s court, holds no formal jurisdiction and was an attempt to achieve symbolic justice for the crimes committed in and after 1965.

This book offers new and previously unpublished insights into the types of crimes committed in the 1965 genocide and how these crimes were persecuted at the International Peoples Tribunal for 1965 (IPT 1965). Divided thematically, each chapter analyses a different crime – for instance enslavement, sexual violence and torture- perpetrated during the Indonesian killings. The contributions consider either general patterns across Indonesia or a particular region of the archipelago. The book reflects on how crimes were charged at the IPT 1965 and focuses on questions relating to the place of people’s tribunal in truth-seeking and justice claims, and the prospective for transitional justice in contemporary Indonesia.

Positioning the events in Indonesia in 1965 within the broader scopes of comparative genocide studies, the book is an original and timely contribution to knowledge about the dynamics of the Indonesian killings. It will be of interest to academics in the field of Asian Studies, Genocide Studies, Criminology and Criminal Justice Studies and Transitional Justice Studies.