Standing Up to the Giant: Analysing Vietnam’s Efforts in the South China Sea

The only way to avoid all-out conflict breaking out in the South China Sea is to present a strong collective front among ASEAN nations and for the international community to urge China to fully abide by international law.

Vietnam has been challenging Chinese territorial claims in the South China Sea, or East Sea (Biển Đông) as Vietnam prefers to call it, for decades. Vietnam has officially laid claims on the Paracel Islands and parts of the Spratlys. China seized the Parcel Islands from Vietnam in 1974 by force and then seized six islets in the Spratlys in 1988. Both countries have been stuck in an increasingly escalating maritime territorial dispute ever since.

Unlike most of its neighbours, Vietnam has been much more vocal about its displeasure of Chinese maritime actions. The Vietnamese government has repeatedly called China’s claims in the South China Sea baseless and its actions illegal. Despite inferior military power, Vietnam’s history of persistence against large powers has proven largely successful.1 In fact, Lee Kuan Yew once referred to the Vietnamese as “the Prussians of the Orient” who will never bow to great powers.2 One need not look further than the Vietnam War to understand how the Vietnamese gained such a reputation.

After officially normalising relations in 1991, bilateral high level talks regarding disputes in the South China Sea were initiated in 1995. The problem, however, was that China was (and is) claiming around 90% of the South China Sea and is only open to discussing the Spratlys dispute.3 To make matters worse, since 1999, China began imposing an annual fishing ban in the overlapping territorial claim area with Vietnam in the northern part of the South China Sea. Since then, these bans have negatively affected Vietnamese fishermen and further increased tensions between China and Vietnam.4

Nevertheless, attempts at diplomacy were made. Both countries signed the Joint Statement on All-Round Cooperation in the New Century in December 2000, which vowed to uphold previous territorial agreements and continue strengthening bilateral cooperation.5 This agreement was followed by the ASEAN-China Declaration of Conduct in 2002. However, this document proved less than satisfying to Vietnam. Vietnam and the Philippines had both proposed a more detailed, binding document, but were rejected by China.7 The document – which is currently being renegotiated – ultimately failed to prevent further tensions in the South China Sea over the course of the next two decades.

Tensions between Vietnam and China began to escalate again in 2007 when the Chinese government announced the creation of a new city called Sansha to administer the Paracels, the Spratlys and other Chinese claims in the South China Sea as a separate district.8 Vietnam publicly denounced the decision and the Ministry of Foreign Affairs called the Chinese action “a violation of Vietnam’s sovereignty”.9 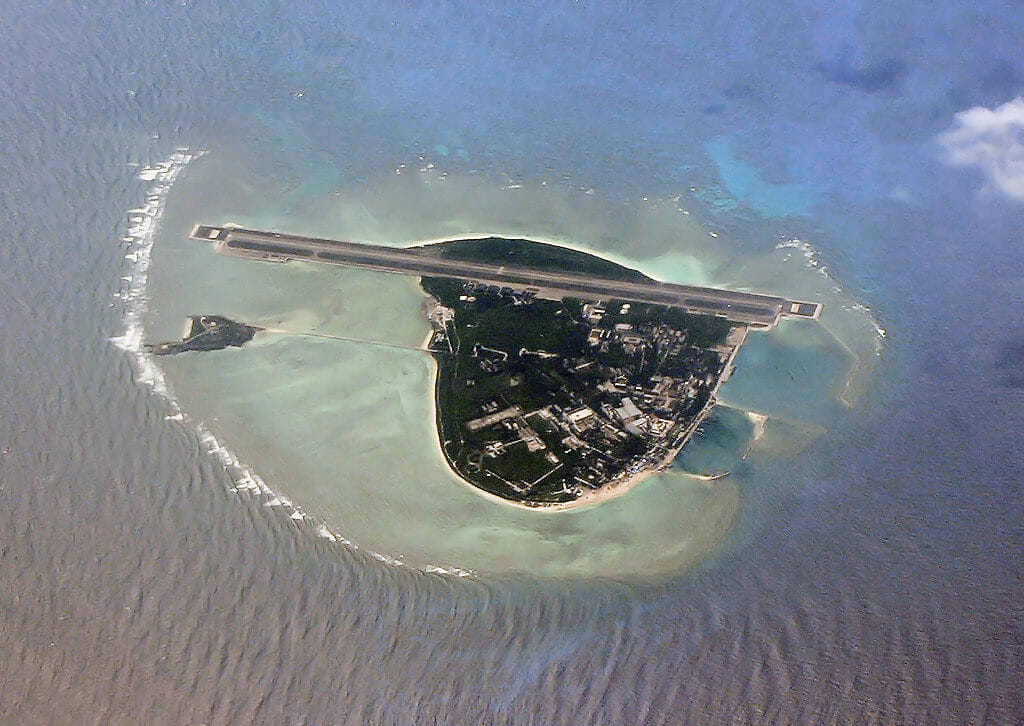 A 2009 aerial view of Yongxing Island (Woody Island), the seat of Sansha, a city to administer the Paracels, the Spratlys and other Chinese claims in the South China Sea as a separate district. Image: Wikipedia Commons

2009, however, turned out to be far worse year for China-Vietnam relations. In March, China announced it would start holding tours to Phu Lam Island in the Paracels. This led to massive anti-Chinese protests in Vietnam and an immediate reaction by the Vietnamese government which accused China of infringing on its sovereignty and called the action “unbeneficial” to bilateral negotiations seeking a peaceful solution to the disputes.10

In May, China submitted its 9-dash line map – which has since then served as China’s main document to assert its legal claims in the South China Sea – to the UN. Since then, Vietnam has repeatedly challenged the map’s legal validity. The Vice Chairman of the National Border Committee of Vietnam, Nguyen Duy Chien, made the following comment concerning the map: “China’s nine-dash line in the East Sea, aka “Bull tongue-shaped line”, is completely legally groundless and is in contrary to the 1982 UN Convention on the Law of the Sea to which China is a party.”11 Vietnam thus regards the claims by China as completely legally baseless and very much contestable.

In November 2009, Vietnam’s Ministry of Justice passed the  Law on Militia and Self-Defense Forces12 which stipulates that self-defense militias will be able to escort Vietnamese fishing vessels. This has morphed into a quasi maritime militia over the years, raising the stakes of any potential Chinese military action against Vietnamese ships. Furthermore, in 2011, both countries signed the Agreement on Fundamental Principles to Guide the Settlement of Sea Disputes.13 The agreement was aimed at peacefully settling South China Sea territorial disputes but has so far failed to produce concrete results. In 2012, Vietnam passed its Maritime Law (Sea Law of Vietnam) which further asserted its jurisdiction over the disputed Spratly and Paracel Islands and which strictly stated that “government ships operated for non commercial purposes can access to the internal waters only by prior approval of Vietnam”.14  Through the passing of such laws, Vietnam has tried to peacefully settle its territorial disputes with China. This has, however, proven far more difficult in practice.

May 2014. Vietnamese protesting against China in Hanoi. Photo: Wikipedia Commons

2014 saw bilateral relations fall to an all-time low over an oil rigging incident. The issue began when the China National Offshore Oil Corporation moved an oil platform into Vietnamese contested waters near the Paracels. Vietnam responded by sending vessels and a standoff – known as the  Hai Yang Shi You 981 Standoff – between Vietnamese and Chinese vessels ensued. 64 Vietnamese soldiers lost their lives. As a result, this incident was met with massive anti-China protests throughout Vietnam.

In response to the incident, the Vietnamese Ministry of Foreign Affairs stated that “Viet Nam demands that China comply with international law and, to this end, immediately stop all infringements of Viet Nam’s sovereign rights and jurisdiction”.15 To Vietnam, this incident showed China’s complete disregard for past agreements as well as for international law and China’s favorite principle of “good neighbourliness”.

In 2016, the Permanent Court of Arbitration in the Hague found China’s 9-dash line claims legally baseless.16 China has chosen to ignore the ruling, but it represents a significant legal win for Vietnam and other claimant ASEAN states.17 Besides solely relying on legal documents, Vietnam has stepped up its efforts to protect its sovereign claims in the South China Sea through different methods. Since 2017, it has slowly added buildings on some of its 10 major islets. Vietnam has now reclaimed new land at 8 of the 10 rocks it occupies and built out many of its smaller outposts on submerged reefs and banks.18

Moreover, Vietnam has allies in its territorial battle against China. Both the United States and Japan have publicly voiced concern over China’s actions in the South China Sea and taken active steps to help Vietnam increase its maritime defense capabilities. Japan, for instance, donated six coast guard vessels to Vietnam in 2014 and pledged another six in 2017.19 As recently as August 2019, the US voiced support for Vietnam’s case in the South China Sea by referring Chinese maritime actions as “bullying”, “provocative” and “destabilizing”.20 Moreover, the first joint naval exercise between the United States and ASEAN is scheduled to begin on September 2, 2019 with Vietnam also participating.21 Having such strong allies on its side further helps Vietnam’s claims continue to be heard internationally while raising the stakes for China in the process.

Vietnam is thus not alone. It continues to be the most outspoken ASEAN member on this issue and has shown no signs of backing down any time soon. Still, besides support from Japan and the US, it will require more active support from its fellow ASEAN neighbours, especially the Philippines – who has yet to implement the 2016 Hague ruling. The only way to avoid all-out conflict breaking out in the South China Sea will be to present a strong collective front among ASEAN nations and for the international community to urge China to fully abide by international law.

Gabriela Bernal is a political analyst and freelance writer based in Seoul, South Korea. She holds graduate degrees from King's College London and Sciences Po Paris. She previously interned at the UN Department of Political and Peacebuilding Affairs in Bangkok, Thailand