NextFighting and Winning the Struggle for Equality for All
FeaturedNEWSOpinion

FORSEA, a Southeast Asia-wide network of democrats, scholars and rights activists, are deeply troubled by the news of Singapore arresting a small but unprecedented group of students who staged a LGBT-rights protest outside the Ministry of Education. We call on the authorities to release and drop all charges against these student activists, whose “crime” was a peaceful demand to repeal transphobic discriminatory policies and practices in Singapore’s schools.

The three protestors arrested, along with two others had held a demonstration outside the Ministry of Education, protesting the alleged mistreatment of a transgender student. In tightly-controlled Singapore this protest was illegal, as it was held without a police permit and such permits are not easily granted. The placards the five held read ‘trans students will not be erased’, ‘how can we get A’s when your care for us in an F’ and ‘trans students deserve access to health care & support’. The case erupted after a trans pre-university student complained that the MOE had prevented her from receiving her hormonal treatment. Born in a male body, she had already received the proper diagnosis for her ‘condition’, gender dysphoria, and was required to start gender reassignment care. MOE rejected the claim, arguing that it was not in a position to interfere with medical treatment, and that it ensured the student would get ‘the education support’ the student needed. The support recommended however was based on home-based learning, removing the student from the school environment. 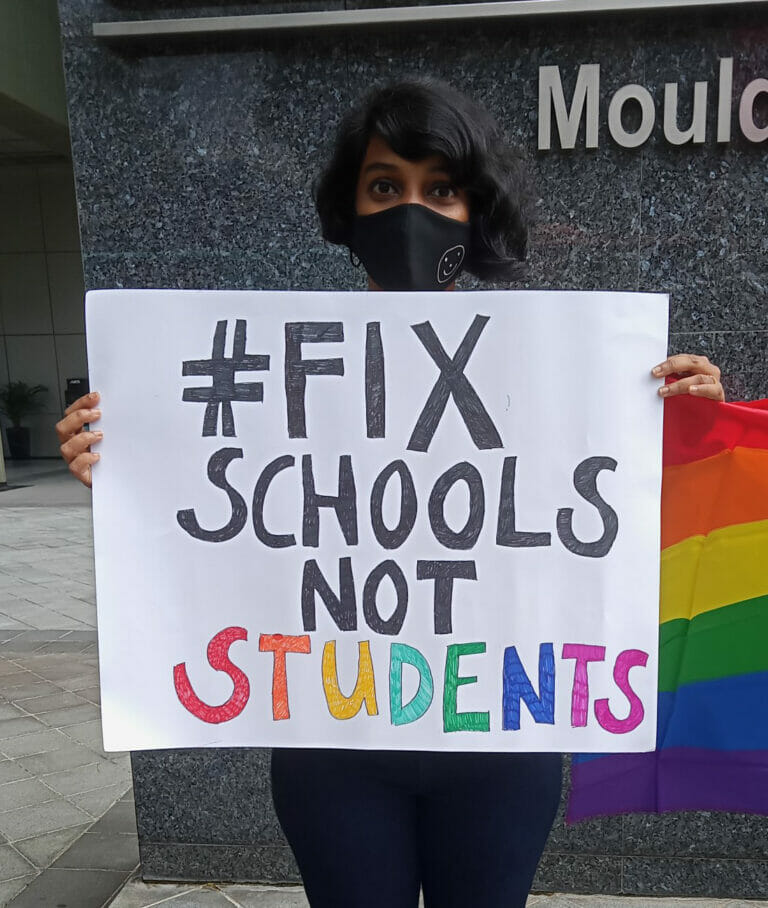 Demonstrator at the Ministry of Education in Singapore. Photo: #FixSchoolsNotStudents Twitter

The treatment of this particular student is only one aspect of the persistent discrimination of LGBTQ+ people.

Schools regularly require their students to adhere to highly gendered dress codes and hairstyles, which make it difficult for trans students to express their trans identities. When you are born in a male body, you are required at school not to dress in skirts and to keep your hair short. Singapore is among the former British colonies in which the colonial-era prohibition of sodomy is still on the books, although it is not strictly enforced. Article 377A of the penal code has only been reformed in 2017 to legalize anal and oral sex for heterosexual people, but not for homosexuals. After the Supreme Court in India struck down Article 377A in 2018 for everybody, similar attempts were made in Singapore. However these cases were dismissed by the Singapore High Court in 2020.

Although Prime Minister Lee Hsien Loong said in November 2020 that ‘there is no reason’ why members of the LGBT community would not be able to fit in Singapore society, conservative Muslim and Christian groups (including women’s groups) vigorously oppose the decriminalisation of homosexuality, including the acceptance of trans people.

Until the mid-1980s, Singapore was home to one of the most well-known places where transvestites and transsexuals gathered. After nightfall the hawkers in Bugis street would close their stalls and the area would be taken over by food stalls among which trans sex workers plied their trade, in some cases to earn money for their sex change operation in Thailand. In the mid 1980s the area was ‘sanitized’ and the trans sex workers were chased away. 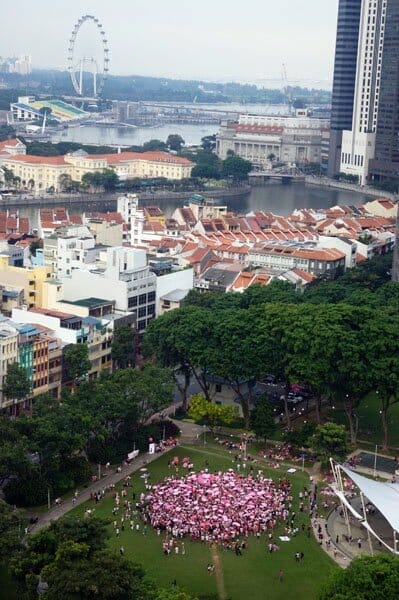 An aerial view of participants of the inaugural Pink Dot SG 2009 dressed in pink and massed at Speakers’ Corner, Singapore. Wikipedia Commons

Although the LGBTQ+ community has been slowly growing, its members have had to remain largely invisible. When in May 2009 the invitation was spread to congregate around the Speakers’ Corner in Hong Lim Park, the only place where demonstrations are allowed, great care was taken to invite only LGBTQ+ people and their friends. Ultimately around 2500 people gathered in the park, holding pink umbrellas and wearing pink clothes. A photograph was made from above, to portray this pink dot in Singapore’s otherwise homophobic society.

Since then the Pink Dot event was held every year, attracting ever more participants. Sympathetic performers gave concerts, booths displayed relevant information and sold LGBT paraphernalia. In 2020 the event was livestreamed. But by then resistance against this expression of LGBTQ+ presence in Singapore had grown. In 2014 conservative Christian and Muslim groups organised a Wear White campaign. Since 2017 it was prohibited for non-resident foreigners to attend the event and sponsoring by foreign funders was no longer allowed.

A young generation of activists is growing restless under the continued repression and invisibility of the LGBTQ+ community and demanding protection against discrimination, as the protesters supporting the trans student indicates. They are out on bail and facing charges. In the meantime several local LGBT rights groups issued a statement following these arrests that they are preparing a report to the UN Human Rights Council for the upcoming Universal Periodic Review of Singapore, which states that 77.6 percent of openly transgender students in the city state reported experiences such as bullying and sexual abuse. These groups are Sayoni, Indignation, Prout, The Healing Circle, TransgenderSG, and Young Out Here.

#FixSchoolsNotStudents
Oomfs pls sign this petition for us trans rights are human rights
Ministry of Education: Transgender Rights In Singapore – Sign the Petition! https://t.co/skJF0xrvLa via @Change

The FORSEA board support efforts to stimulate Singapore to accept the recommendations of the Human Rights Council adopted in its General Assembly in 2016. The resolution adopted reaffirms that all human beings are born free and equal in dignity and rights, and that everyone is entitled to all the rights and freedoms set forth in the Universal Declaration of Human Rights, without distinction of any kind, such as race, colour, sex, language, religion, political or other opinion, national or social origin, property, birth or other status. It also strongly deplores acts of violence and discrimination, in all regions of the world, committed against individuals because of their sexual orientation or gender identity.

Singapore should repeal all discriminatory laws and policies against members of the LGBTQ+ community and uphold and protect their rights to freely express their identities.