During the past month, Hong Kong has been rocked by protests on a scale unprecedented since anti-colonial demonstrations against British rule in 1967.

During the past month, Hong Kong has been rocked by protests on a scale unprecedented since anti-colonial demonstrations against British rule in 1967.

After two mammoth marches in June interspersed with smaller protests, a third massive march took place on July 1, 22 years to the day after Hong Kong transitioned from a British Dependent Territory to a special administrative region of the People’s Republic of China in 1997. Organised by the Civil Human Rights Front, this annual demonstration has traditionally highlighted dissatisfaction with the absence of progress towards universal suffrage and related grievances with both the central government in Beijing and the local Hong Kong government. Despite involving up to half a million people in some years, the day has generally passed off without incident.

This year was different. As marchers set off from Victoria Park at around 2pm, thousands of students and young people dressed in black and donning yellow construction hats had already surrounded the Legislative Council (LegCo) offices. Upturned signposts, a makeshift battering ram and a power tool were deployed against the metal doors and reinforced glass of two of the building’s entrances. By 9pm, hundreds of protesters were in the building. Some used spray cans to daub demands and anti-government slogans on the walls of the main chamber and the desks and portraits of pro-Beijing legislators were damaged. Some offices were ransacked, but no lasting damage was done.

The occupation of LegCo lasted less than three hours. Protesters left the building as riot police marched towards the building and tear gas yet again filled the air of the surrounding streets.

The spark that ignited this apparently leaderless radical social movement was the Hong Kong government’s attempt to rush through amendments to an extradition law that would have allowed the extradition of individuals to mainland China and other countries.

In the context of increasing involvement of the central government in the governance of Hong Kong and the disappearance in 2015 of five Hong Kong booksellers selling politically sensitive publications, the so-called “evil law” has generated deep anxiety. Attempts to rush it through were even criticised by pro-Beijing political parties such as Democratic Alliance for the Betterment and Progress of Hong Kong. The law was formally suspended by Hong Kong’s chief executive, Carrie Lam, on June 15 in a humiliating U-turn. Lam subsequently apologised for not listening to the people. 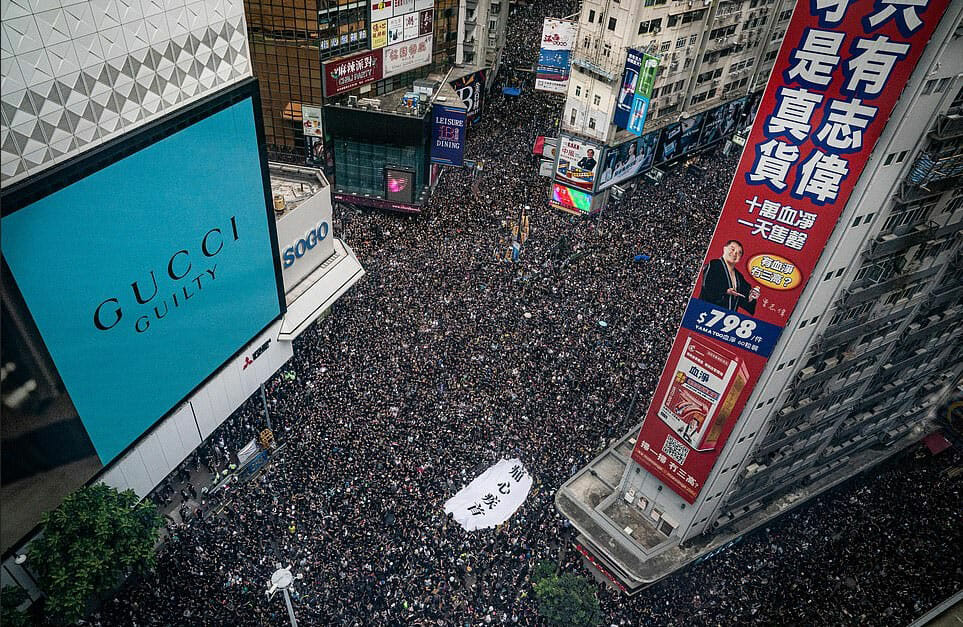 Until the storming of LegCo, the central government had largely refrained from making incendiary public comments or reporting the events in Hong Kong in its state-run media. However, Beijing’s hidden but certain frustration with Lam’s mismanagement of the extradition bill gave way to an open warning of “zero tolerance” in an editorial carried by the state-run Global Times newspaper.

While such warnings carry a clear signal of state repression in other Chinese cities, the implications for Hong Kong are less easy to predict as they are refracted through the “one country, two systems” formulation – or what remains of it. This facilitates the inclusion of relatively liberal Hong Kong under authoritarian China’s sovereignty and guarantees Hong Kong’s “way of life” under the Sino-British Joint Declaration until 2047.

Nevertheless, increased deployment of the Special Tactical Squad of Hong Kong’s riot police nicknamed the “raptors” seems likely and more direct encroachment on the Hong Kong government’s autonomy from Beijing will only serve to exacerbate tensions.

For her part, Lam has committed to pursuing and charging those who entered the LegCo building even as she again stated that she needs to listen to Hong Kongers, especially the youth. This will be difficult on both counts. Practically, the protesters wore masks and will not be easily identifiable even if face recognition technology developed in China is deployed. And, politically, who is Lam going to listen to – particularly given the nature of the protesters demands? They have consistently stated four demands: revoke the bill permanently; launch an independent inquiry into police brutality; release those arrested; and the resignation of Lam herself – all of which she has rejected. 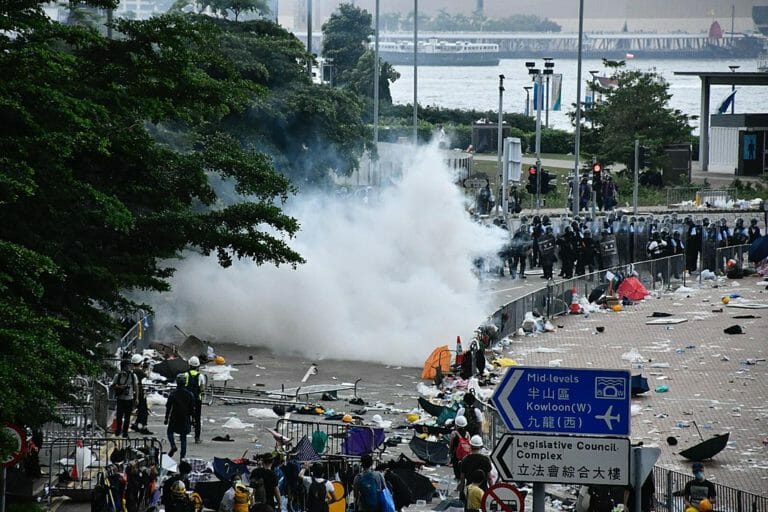 Tear gas fired by the police to the protesters in Tim Mei Avenue at demonstration against extradition bill, 12 June 2019. Photo:  Wikipedia Commons

Read More:
FORSEA offers a Voice of Solidarity to the Freedom-Loving People of Hong Kong

A simultaneous crackdown and listening exercise is a hallmark of authoritarian rule – and the authorities in China are schooled in such ways of governing. But, for a hybrid regime such as the Hong Kong government, the task must seem daunting. Most potential interlocutors such as the leaders of the extraordinary pro-democracy Umbrella Movement of 2014 are in prison. Politicians and leaders from the pan-democratic camp have conspicuously failed to gain the confidence of either participants in the Umbrella Movement or the new generation of students and young people and cannot speak on their behalf.

To the extreme discomfort of the central government, “localism” emerged as a powerful political force both during the Umbrella Movement and in the aftermath of its defeat. This loose term covers a wide range of views, from the right wing and far-right ideas of organisations such as Youngspiration and Civil Passion that accuse mainland Chinese of coming to Hong Kong to seek generous welfare support, to those of liberal rights-based organisations such as Demosisto, which seek to include marginalised groups including mainland migrants to Hong Kong.

If the liberal left-leaning Demosisto – or individuals close to the group – do well in the forthcoming District Council elections, scheduled for November 24 2019, they could possibly kick start a process of dialogue and progress towards the ultimate goal of universal suffrage, which was denied by the former colonial authorities and has been derailed by Beijing. But for this to happen, the Hong Kong government will have to demonstrate autonomy from the central government and a willingness to meet some of the demands of the students and young people.

In the meantime, further protests and the potentially violent uncertainties of a “zero tolerance” policy will hardly inspire confidence and calm. The resignation of Lam – or at least a date by which she will go – would go a long way to restoring order in the city.

This article is republished from The Conversation under a Creative Commons license. Read the original article.
Banner Image: Hong Kong 12th June 2019: Anti Extradition Bill Protest. A reporter running for cover as tear gas canisters explode during clashes with protesters outside the Central Government Office in Hong Kong. – Image Shutterstock