NextLeading scholars’ consensus was clear: Neither ICJ nor ICC on their own will deliver Rohingyas from hell
FeaturedOpinion

Indonesia’s National Police, long believed to have abetted the creation of the thuggish Islamic Defenders Front (FPI) as an underground force to carry out extrajudicial tasks against police targets, clearly have decided the organization has outgrown its usefulness and are cracking down violently.

The FPI’s leader, Rizieq Shihab, returned from exile in November to tumultuous mass gatherings. He is now in custody and six of his followers are dead after a December 10 gunfight that FPI members charge wasn’t a gunfight at all but rather an ambush. Four more are on the run from the confrontation. Police are still busy arresting hundreds of protesters who are also FPI members after they staged a demonstration without complying with health protocols to urge the police to release Rizieq, who will remain in detention for at least the next 20 days.

Police Spokesman Yusri Yunus said Rizieq could face up to six years in prison if found guilty of inciting people to violate health protocols amid the pandemic, which has taken nearly 20,000 lives and sickened 650,000, and obstructing law enforcement.

Rizieq fled to Saudi Arabia three years ago on charges of leaked pornographic conversations in the WhatsApp application between him and a woman not his wife. He has called the charges – which have since been dropped – an attempt to discredit him. On his return, he has raised government hackles by promoting what he calls a “moral revolution” campaign accusing the government of immorality and corruption.

Although Indonesia’s ambassador to Saudi Arabia said the cleric had been deported back to Indonesia for violating the kingdom’s immigration law, Rizieq was greeted as a conquering hero by thousands of supporters when he landed at Jakarta’s Soekarno-Hatta Airport on November 10, alarming army personnel who began removing Rizieq’s billboards and posters all over the capital city on the grounds that they were not authorized. Jakarta Military Command (Kodam Jaya) Maj. Gen. Dudung Abdurachman even threatened to ‘beat’ FPI members and Rizieq if they were disturbed the peace in Jakarta. 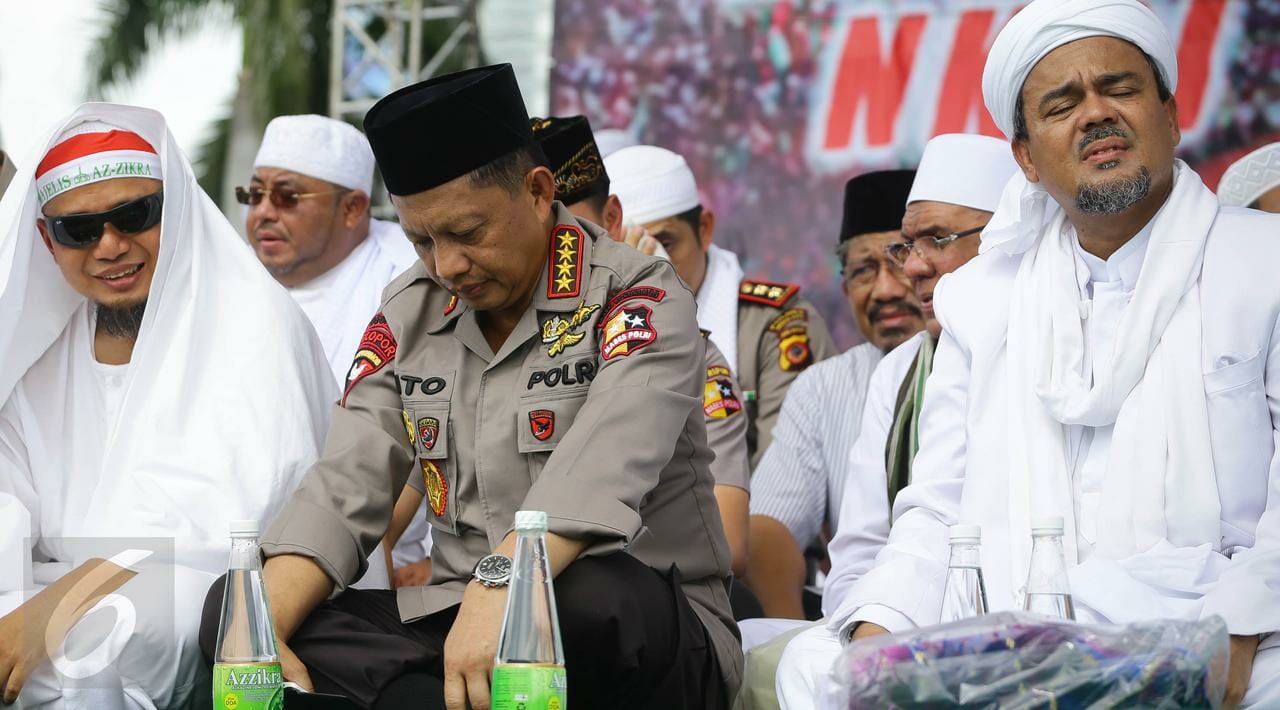 Indonesia, whose Sunni Islam worshipers have traditionally been moderate, with jeans- and miniskirt-clad youth, has in recent years been troubled by growing Islamic radicalism. At the forefront has been the FPI, whose members have harassed women for not wearing conservative clothing and who have been known to bust up nightclubs and harass people of other faiths, sometimes believed to be at the behest of the police. Rizieq’s return, with FPI members demanding that Indonesia implement shariah law, has raised concerns that religious fervor is getting out of hand, especially after a crowd gathered again at a wedding and religious assembly at his residence in Petamburan, Jakarta following the airport reception.

At least four top police officers were removed from their posts for letting the gathering go ahead. Based on data from the Ministry of Health, at least 80 people later tested positive for Covid-19 after the affair. The police launched an investigation and immediately named Rizieq a suspect on charges of violating the Covid-19 protocol for holding an event with a large crowd. He had been summoned two times earlier by the police, but never showed up. At that time, the police were investigating reports that the organization would mobilize crowds during Rizieq’s questioning at the police station.

Prior to midnight on December 8, police followed a motorcade carrying Rizieq, his family and FPI members which ended in the shootout on the toll road. The police and the FPI both have their own versions of the incident. The head of the Jakarta Police, Inspector General Fadil Imran, said the shootout occurred because 10 FPI members in two cars attacked the police with firearms and sharp weapons. After the shooting, police said they had confiscated two 9mm caliber handguns, seven bullets, three bullet casings, a sickle and a sword. But FPI members allege the police attacked first and kidnapped and massacred the six dead.

“This is an extrajudicial killing. They (the police) should be tried by a human rights court,” said the FPI General Secretary Munarman. But the police defended themselves by saying two people were killed in the crossfire, while four others were shot in the car as they tried to grab police weapons.

However, Munarman denied that the FPI members possessed firearms as the police claimed. “They never (carry weapons) and our organization’s standards are prohibited from carrying firearms and explosives,” said Munarman. The pistols that were used as evidence, he said, were expensive, so it was impossible for FPI members to afford them. However, the police insisted that they would prove that the guns belonged to FPI members.

In total, 19 gunshots were found on the bodies of the victims, most of them on the left sides of their chests. Each victim had been shot two, three, or four times with black powder stains around them, which meant they were shot at close range. Andi Oktiawan, 33, one of the victims, was hit four times including in his left eye, based on testimony of his uncle, Umar.

Responding to the deaths of the six FPI members, President Joko Widodo, widely known as Jokowi, said that no people or organization may arbitrarily violate the law. However, he said, the security apparatus must use their authority in a reasonable and measured manner in enforcing the law. “It is the duty of the authorities to enforce the law firmly and fairly. And remember, these officers are protected by law in carrying out their duties,” said Jokowi.

The National Commission on Human Rights (Komnas HAM) is currently investigating the shooting and the results will be reported directly to the president. “The chronology and facts of the incident are getting complete. It only requires deepening and developing a number of things such as the results of the autopsy, ballistic tests and vehicle tests used by members of the police and FPI,” said Komnas HAM Commissioner Beka Ulung Hapsara.

This is the first time relations between the police and the FPI have deteriorated into a shootout. However, the feared police anti-terror detachment Densus 88 has often been accused of ambushing terrorist groups such as Jamaah Islamiyah and Islamic State (IS). In 2016, Komnas HAM launched an investigation into alleged human rights violations against Densus for shooting a suspected terrorist Siyono in a car after he was arrested. Densus claimed that the shooting took place because Siyono was about to seize an officer’s weapon. Komnas HAM’s findings stated that there was a violation of procedure in the incident.

Rizieq has been named a suspect six times in a number of cases, two of which have resulted in prison sentences. In 2003, he was jailed for seven months for inciting sympathizers to wreck entertainment venues in Jakarta. In 2008, Rizieq was also sentenced to one and a half years for inciting his followers to commit violence against the mass of the National Alliance for Freedom of Religion and Belief (AKKBB) in the area around the National Monument in Jakarta.