Japan’s rivalry with China reinforces Tokyo’s inclination to avert its eyes from human rights abuses, electoral fraud, corruption and suppression of fundamental freedoms. Tokyo is not opposed to liberal democracy but also not prepared to risk anything to support it.

The Myanmar military’s unconstitutional coup d’etat to derail democracy, and subsequent killing of peaceful pro-democracy protestors, is awkward for Japan’s so-called values diplomacy. Aside from some mild diplomatic handwringing, Tokyo has confirmed that promoting values is not a priority in Myanmar and that it is not willing to sacrifice anything to protect or promote them. Across Asia, the Japanese government has no qualms in working with whoever is in power, raising questions about whether there is any substance to its values diplomacy or if it’s merely a branding strategy. Large protests in Tokyo by Myanmarese residents seek to pressure Tokyo to side with their nation’s democratic aspirations, but the Japanese government is signaling that it will work with the junta. 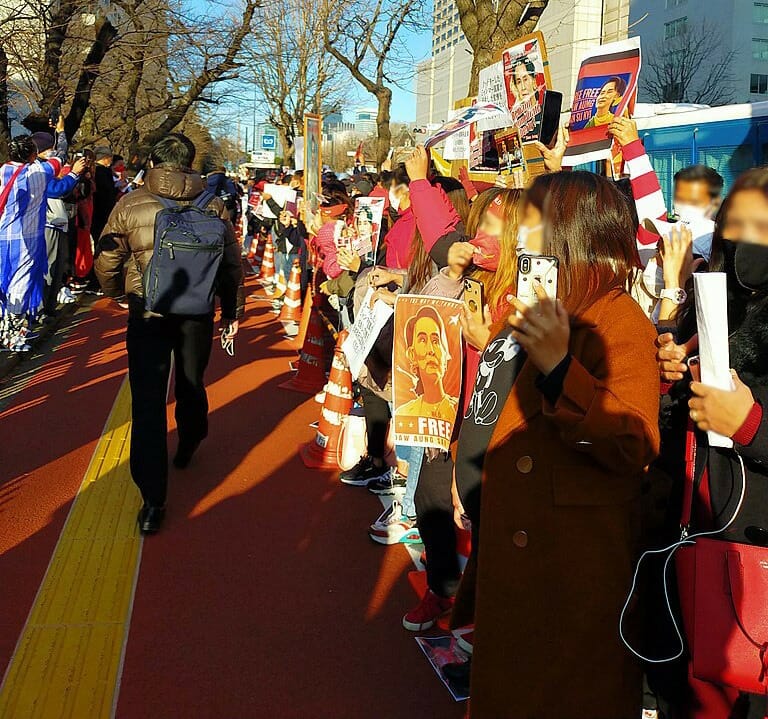 Tokyo managed to get President Trump to back PM Abe’s vision of a Free and Open Indo-Pacific (FOIP) and participate in the Quad security component involving Australia, India, the US and Japan. Ostensibly, FOIP is a values-driven strategic concept aimed at containing China’s expanding regional influence. The conceit is that values matter and that by promoting democracy, freedom and human rights, FOIP stands in stark contrast to what China offers. PM Suga and President Biden have reaffirmed their support for FOIP and the Quad. Does this matter? In the case of Myanmar, not if one narrowly focuses on democracy, freedom and human rights.

On the eve of the coup, Watanabe Hideo, chairman of the Japan-Myanmar Association, visited Aung San Suu Kyi and coup leader Commander-in-Chief Min Aung Hlaing to discuss boosting Japanese investments there. Watanabe has long been the chief fixer for economic relations and has a long track record of working closely with the military. He and many in Japan are more concerned about China’s soaring influence in Myanmar and are eager to counter that through expanded economic relations. For the new junta and Tokyo, he is a key back channel for communications, but there are no signs that he promoted the democratic transition or supports efforts to reverse democratic backsliding in Myanmar. The Japanese business community sees Myanmar as the region’s most promising frontier and are there to make money regardless of the political situation.

Miyake Kuni, a foreign policy advisor to PM Suga, opposes sanctions and pressure, instead advocating persuasion. He argues that, “a simple resumption of a ‘big stick’ policy vis-a-vis Myanmar would only push the Tatmadaw back to the dark side.” Back to the dark side?! Given the scale of protests against the military coup, it’s safe to say that for the people of Myanmar the military is the dark side and the greatest threat to democracy, the rule of law and public security. Miyake wrote in the Japan Times (Feb. 4, 2021), “What is needed is a subtle and mature supervision of concerted efforts by the international community to resume talking to and eventually persuade the leaders of the Tatmadaw to change their mind.”  And how is that going to happen? The same way that Japan has maturely and subtly persuaded the Thai military to mend its ways? Or subtly used the ‘little stick’ of dialogue to nudge Cambodia’s Hun Sen towards free and fair elections?

According to Stanford University’s Daniel Sneider, a veteran Asia-hand, the Biden Administration rejects such vacuous sophistry. Writing in Tokyo Business Today (Feb 18, 2021), Sneider describes early frustrations in the Biden Administration with Japan’s opposition to sanctions and pressure on the military. Apparently, Tokyo has not been very persuasive in convincing the US to join it in abandoning democracy in Myanmar under the pretext of respecting Asian values.

Tokyo downplays human rights and democratic values in favor of maintaining trade ties and securing geo-strategic advantage. It is thus a values-free diplomacy of pragmatism and expediency, dealing with regional governments as they are, not as one might wish them to be. Japan is certainly not unique in this regard, but Abe and Suga invite scrutiny of the government’s record due to their sustained grandstanding on promoting values.

The Japan International Cooperation Agency (JICA) pursues a regime-compatible approach to development assistance and thus does not intervene to promote democracy, bypasses civil society and prioritizes smooth relations with recipient nations. From 2007-2016 Japan ranked 26 out of 29 donor nations in terms of its overall aid to democratization-related programs.

JICA official Shiga Hiroaki explains that, “JICA does not support democracy promotion due to an entrenched belief among officials that development aid should be apolitical.”  Japan emphasizes long-term capacity building of state institutions rather than strict adherence to the values and principles of democratic governance. He added, “For the Japanese people, the most important value is harmony, i.e. to keep harmony among community members. Freedom is also an important value but probably after harmony.” But harmony according to who?

One suspects that pro-democracy protestors in Myanmar also seek harmony, one that is based on the military respecting the NLD’s landslide victory and the constitution.

Aid without conditions is welcome by recipients, whether from China or Japan, but this means it is not being used to promote democratization or human rights. The nostrums of shared values are thus invoked by Japan like background music to establish an appealing identity and to provide useful political cover for expanding security ties with other regional governments. The main goal of brandishing democratic commonalities is not about spreading or supporting universal values but rather is to facilitate a shift in Japan’s security policies and shrug off constitutional constraints under the banner of Abe’s “proactive pacifism”.

Japanese experts confide that the impact of, “China’s foreign aid resembles that of Japan, as both emphasize noninterference and noninterventionist principles.” Containing China is more important to Japan’s leaders than expanding or defending democracy in Asia, and thus it refrains from actions that would jeopardize relations with authoritarian or illiberal governments. The crux of the problem is that Tokyo believes that its relations with undemocratic nations might be undermined to the extent that Japan insists that they embrace such values because China offers unconditional support. Thus, Japan’s rivalry with China reinforces Tokyo’s inclination to avert its eyes from human rights abuses, electoral fraud, corruption and suppression of fundamental freedoms. Tokyo is not opposed to liberal democracy but also not prepared to risk anything to support it. 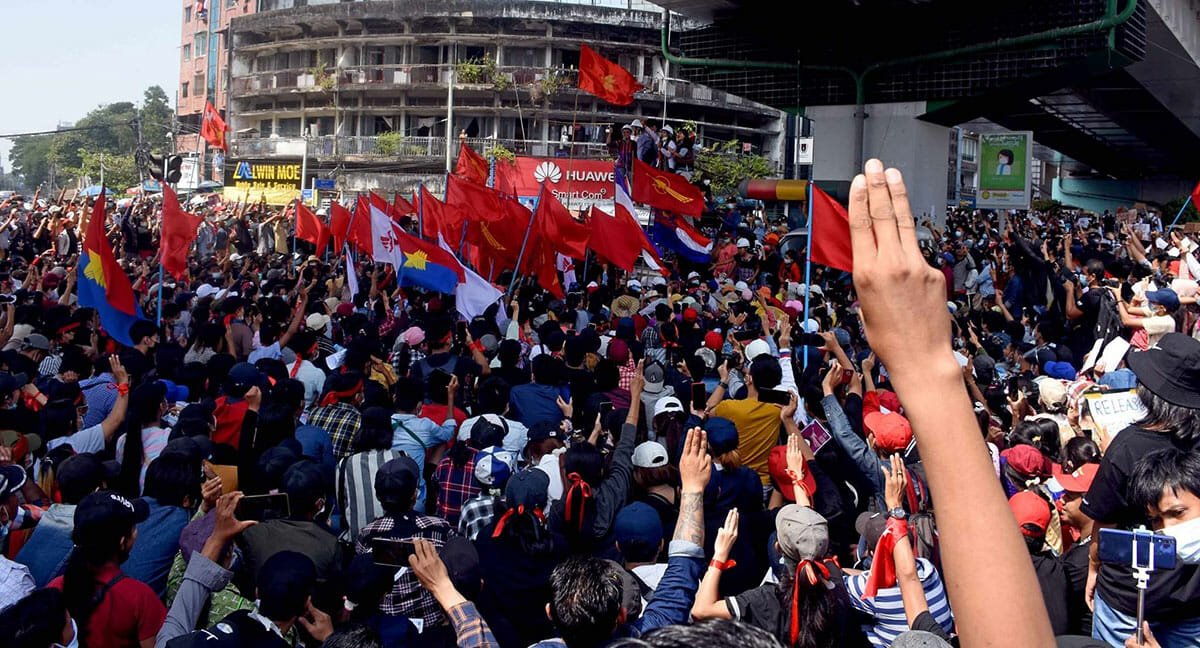 Japanese politicians brandish values principally to align Japan with the US and other regional democracies. Tokyo has expanded security ties with the US, Australia and India, the so-called Quad, as part of its balance of power strategy to contain China, but position this as part of a broader agenda of advancing shared values under the banner of a Free and Open Indo-Pacific. The Japanese public has been wary of PM Abe’s agenda of boosting security alliances and easing constitutional constraints on Japan’s armed forces so emphasizing the shared values of a concert of democracies has provided useful political cover.

Even among the ruling elite, there is unhappiness with the government’s hypocrisy. In mid-2020 LDP conservatives condemned Abe’s ‘weak-kneed’ response to China’s curtailing of Hong Kong’s autonomy and crackdown on pro-democracy activists. As in the cases of Tibet and the jailing of over one million Uighurs, Abe didn’t champion the values he preached.  In response to democratic backsliding across Asia, Abe and Suga have remained silent and they have cozied up to human rights suppressing strongmen like Rodrigo Duterte, Hun Sen and Narendra Modi. One wonders what values Japan’s ambassador to Myanmar was promoting as a leading apologist for the military’s expulsions of ethnic Rohingya? That effort should stand Japan in good stead with the new junta, but one has to be incredibly naïve to imagine that Tokyo can persuade Tatmadaw to change its mind. Like Tokyo, the junta is hoping to resume business as usual, but popular discontent and civil disobedience render this wishful thinking. The genie of democracy is out of the bottle.

Jeff Kingston is Director of Asian Studies at Temple University Japan. He is author and editor of a dozen books, including Press Freedom in Japan (Routledge 2017), Japan’s Foreign Relations (2018), Japan (Polity 2019), Press Freedom in Asia (Routledge2019) and the Politics of Religion, Nationalism and Identity in Asia (Rowman & Littlefield 2019).