The Sun has Set on Empire: Let’s Reimagine Southeast Asia

The struggle for racial, political and economic justice in Southeast Asia is a fight for a genuinely postcolonial condition, and its establishment is implied in each protest against authoritarian ambitions. If colonialism made the modern world, then decolonisation will not be complete until the world – including Southeast Asia – is reimagined.

Decolonisation has started to gain political currency in the world’s former imperial metropoles in recent years. It manifested in calls to abolish police brutality, revise white-washed curriculums or toppling statues of slave owners. Across continents, universities, museums, student organisations, indigenous and ethnic minority movements continue to interrogate the foundational structures of the worlds they inhabit, despite facing scorn and ridicule from critics for what has been framed as “culture wars” by the “woke”.

Whereas in Southeast Asia, “decolonisation” does not necessarily garner the same kind of enthusiasm that it may appear in other parts of the world today.

Fueled by the uncertainties precipitated by the COVID-19 pandemic, Southeast Asia has witnessed a repeated assault on its democracies. Schools and universities in the Philippines now face the prospect of limitless surveillance with police and armed military presence as a result of the unilateral repeal of the University of the Philippines (UP) and the Philippine Department of National Defense (DND) accord on academic freedom. In Thailand, pro-democracy protests remain steadfast in demanding reforms of its monarchy. The Tatmadaw regime in Myanmar had staged a coup and continue to use extreme military measures to silence its dissenters. Malaysia’s state of emergency that comes after its unprecedented political crisis last year has granted unbridled, illegitimate authority to an unmandated regime led by Malay supremacists. Inaction towards human rights violations, rising religious fundamentalism and unsatisfactory measures to contain the pandemic have also crippled Indonesia’s democratic ethos. 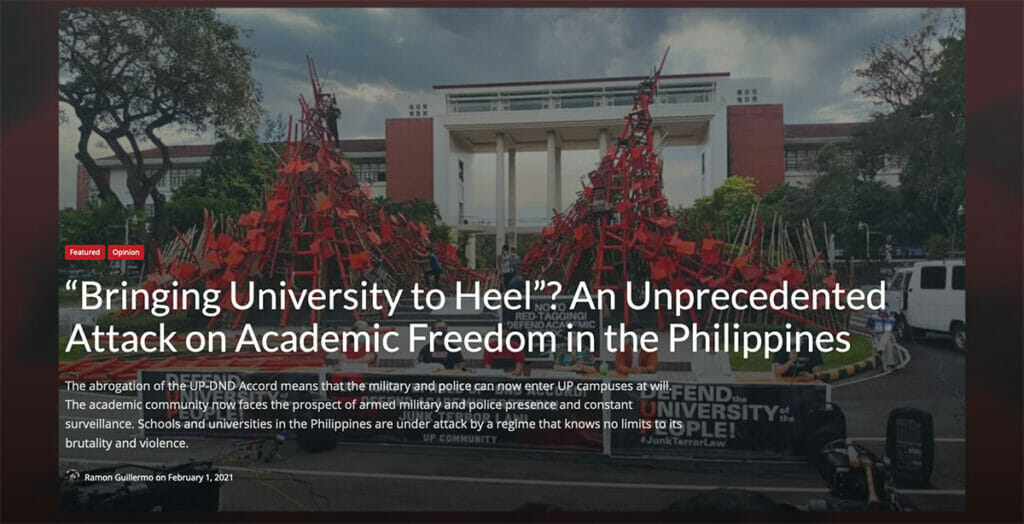 What does a term like “decolonisation” mean to a region like Southeast Asia today? Notwithstanding the political carnage borne out of institutions and their legacies of Empire? The term means, and its requirements have remained contested worldwide for over a century.

At the end of World War I, colonial administrators in Europe had begun to view decolonisation as an inevitable process that would safeguard imperial economic and political interests in the colonies. As political theorist Adom Getachew argues, the granting of independence would be fashioned in the European gaze, compromising “processes of unequal international integration” that were increasingly racialised in the late 19th and 20th centuries. However, anticolonial nationalists had been galvanised into demanding sovereignty and made attempts to deny European imaginings of nation in their societies. The Japanese conquest between 1941 and 1945 mobilised Southeast Asia’s peoples, promoting quasi-militaristic values that had further legitimised the use of violence to expedite independence and resolve conflicts over national authority and identity.

As more countries in Southeast Asia gained independence, cultural decolonisation became more critical. Together with European political and economic domination in the region, indigenous systems of knowledge and tradition were subjected to the scrutiny of Orientalist scholars, who framed Southeast Asians as backward and uncivilised through racialised terms. Consequently, postcolonial Southeast Asian states were rendered as a people without history, paving the way for nationalist elites valorising post-Enlightenment ideals and paternalistic attitudes. The struggle against this has been especially central in countries like Cambodia, in which the displacement of indigenous cultures and traditions by the Khmer Rouge and the 1965 anticommunist purges in Indonesia were extremely traumatic.

Cambodia, Vietnam, Indonesia and Thailand, where reckoning with the persistence of illicit trade for Southeast Asian heritage has gripped national politics, reignited calls to consider object restitution and its integral role in evolving narratives of national identity. Students and activists are protesting against Singapore’s discriminatory laws and policies against the LGBTQ+ community, citing an increasingly homophobic society’s colonial origins. Environmentalists, labour unions and workers continue to protest the Omnibus Law on Job Creation in Indonesia, fearing further degradation of living standards and climate change. 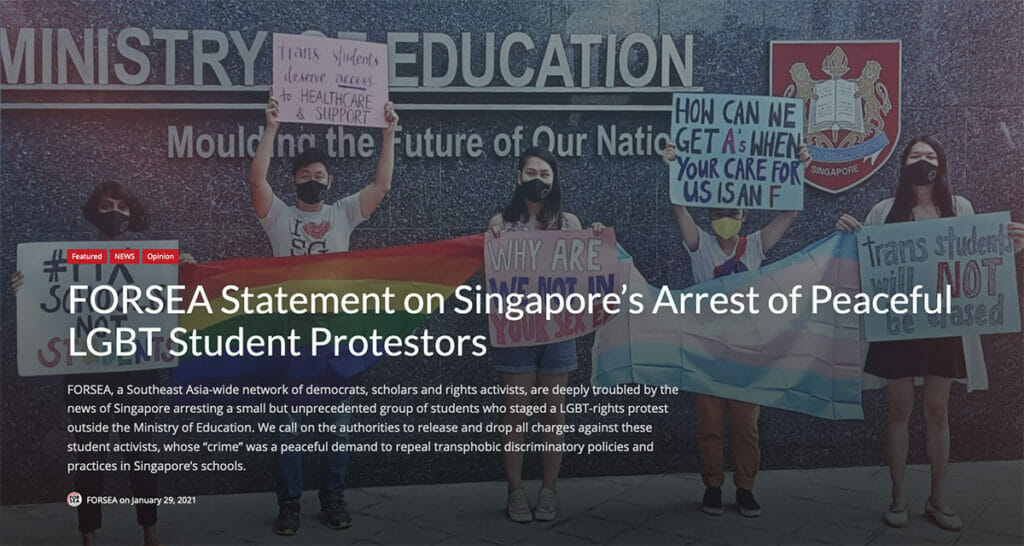 Under the banners of exclusion and minoritisation inside former colonial states’ borders, antagonism towards these tragedies, particularly the crimes against Rohingyas and Patani Malays, hardly transcend national identities beyond our own. As a result, the limitations of Southeast Asians to imagine transnational, transethnic solidarity come to the fore.

Now, partly riding on the global reverberations that movements like Black Lives Matter, Milk Tea Alliance and The People’s Party 2020, calls to reexamine racial, nation-bound thinking matter to Southeast Asians more than ever. Colonialism, critics insist, did not just shape regions that have culminated into the global south. It has made the modern world as we know it.  As sociologist Syed Hussein Alatas has written, colonial capitalism had diminished the potential of self-determination in Southeast Asian societies. Profits from extractive trade fueled the rise of port cities like London and Amsterdam, while Southeast Asia’s economy that slavery and indentured labour created amassed an obscene wealth in the metropoles.

Political scientists and bureaucrats prefer to describe the festering presence of tyranny in Southeast Asian autocracies as “fragile”, “hybrid”, and “competitive authoritarian” democracies because they uphold the profound continuity of the postimperial world order. However, in every moment of opposing state authorities, protesters are forcing renewed national narratives and a confrontation with Empire. It is an appeal for decolonisation in every sense of the word. The illusion of “the empire on which the sun never sets” is finally eroding.

Banging pots and pans in the streets of Yangon to mark the return of evil or young women uploading TikToks alleging sex scandals involving Indonesian politicians, direct action function as interstices that are tearing apart the fractures and frictions between our past and present. By insisting that the past remains in our present, these protests have unmasked the economic achievements and political stability of nations as the product of colonial exploitation and racialised despotism.

This historical reckoning is merely the beginning for Southeast Asia. Acknowledging that our colonial past has shaped present-day inequalities and hierarchies that make up the world’s structures set the stage for the next one: radical reimagination.

Reparation is owed to Rohingyas as much as it is to other ethnic minorities subjected to state-endorsed discrimination and violence. It would mean treating all migrants and refugees of the colonised world as equal participants in Southeast Asian society. Moreover, this is a form of reparation that cannot be achieved overnight in a single conversation. Instead, it must be predicated upon renewed commitments to an inclusive and egalitarian Southeast Asia.

But today, the poverty of imagination when we think about nations without wrangling its colonial legacy has limited our ability to collectively overcome the legal and material injustices of an unequal postimperial world. The culmination of this failure is the Association of Southeast Asian Nations (ASEAN) ‘s wilful inaction to end the Rohingya genocide. Consequently, these historical processes allow us to imagine nations through Cold War bipolarity and suggest that reimagination remains in the realm of possibility for Southeast Asian nations.

Through Imagined Malaysia’s public history work, we try to explore how and why sovereign nations claim their futures to be predestined. Through avenues of discussing alternative, hidden aspirations for nation, our activities seek to make sense of how troubled senses of belonging in Southeast Asia can be remedied. Through radical retellings of our past, the present and future are remade. In doing so, we discover a threshold for the emerging possibilities to deconstruct blinders and boundaries of Southeast Asian nation-states.

To reimagine Southeast Asia is not an easy feat. However, we should remember that just 80 years ago, Empire appeared as the most stable and permanent feature of the international order. But in the past three decades, anticolonial nationalists and atrocities had transformed ideas of humanity and the world.

The struggle for racial, political and economic justice in Southeast Asia is a fight for a genuinely postcolonial condition, and its establishment is implied in each protest against authoritarian ambitions. If colonialism made the modern world, then decolonisation will not be complete until the world – including Southeast Asia – is reimagined.

Netusha Naidu is the co-founder of Imagined Malaysia, a nonprofit education project that aims to broaden understanding of Southeast Asian – and specifically, Malaysian – history, by providing a platform to learn and critically discuss alternative historical narratives. Imagined Malaysia has organized countless forums and dialogues, exhibitions, and published an annual journal to push historical discourse in Malaysia. Netusha hopes to participate in the effort of creating public awareness and education about the different narratives and stories that may be omitted from the official/master history. This is to not only change understanding of the nation’s history but to deepen and evolve it to have a more inclusive and rich discourse. The crucial point is to address some of the present concerns regarding historical literacy in Malaysia.