The NEW REIGN of DIVISION HAS BEGUN in THAILAND

Royal absolutism is likely to pick up speed following the coronation. The possibility of consensus-making will diminish the more absolutism grows, and so too will the likelihood of political conflict.

The coronation of King Vajiralongkorn of Thailand was held from 4–6 May. It was the first crowning of a sovereign since his father – late King Bhumibol Adulyadej – was enthroned on 5 May 1950. A few days before the coronation, King Vajiralongkorn surprised the public by announcing his marriage with Suthida Vajiralongkorn na Ayutthaya, a former flight attendant who is now Thailand’s queen consort.

Bhumibol reigned for 70 years until he passed away in October 2016. The long, authoritative reign of Bhumibol raises a critical question if Vajiralongkorn’s reign would also so successful.

How Thailand will look in the post-coronation period predominantly rests on the ability of King Vajiralongkorn to build a new consensus with major political stakeholders. Thailand has fallen into a protracted crisis since 2006 – the year the Thaksin Shinawatra government was overthrown in a coup. The crisis coincided with the decline of the Bhumibol era when its political consensus came apart at the seams.

Political stability had been sustained in the previous decades mainly because Bhumibol was able to negotiate a consensus with his people. It was also possible because he earned a great degree of legitimacy through the entrenchment of his moral authority. But King Vajiralongkorn is cut from different cloth. The achievements of Bhumibol were individualistic and not institutional, meaning the royal transition fails to automatically bring security to the monarchy.

Political upheaval has persisted since the beginning of the new reign. The elections held on 24 March were massively tainted by fraud. The results have yet to be announced, further deepening political uncertainties. But a new consensus could possibly unlock the political impasse – if it is ever established.

Political consensus is key to a flourishing reign. Consensus may not lead to democracy in Thailand, but stability can be achieved through political compromises. The tricky part is how to keep the consensus functional at all times. Bhumibol’s hegemonic rule was characterised by the predominance of consensus over coercion. In contrast, only a few years into the Vajiralongkorn reign, coercion has been a focus at the expense of consensus.

Meanwhile, Thais are losing trust in fundamental institutions. The so-called independent organisations are anything but independent. The courts, the election commission, the anti-corruption agency – to name a few – are obviously working at the behest of the traditional elite. The scene of Thais protesting against these institutions is becoming so common that it wrecks their previously apolitical and respectful image.

The difficulty of rebuilding consensus has a lot to do with King Vajiralongkorn. His political strategy is already causing distrust on both sides of the Thai divide. Lacking popular support unlike his charismatic father, many wondered if Vajiralongkorn would reach out to Thaksin, who has remained highly popular among his red-shirt supporters.

But as it turned out, when Thaksin nominated Prince Ubolratana Rajakanya as prime minister for his now-disbanded Thai Raksa Chart party, Vajiralongkorn issued a royal command castigating him for politicising the monarchy. Vajiralongkorn’s damning response to Thaksin is seen as a move to calm the yellow-shirt royalists who were enraged by a newfound alliance between Thaksin and Ubolratana. 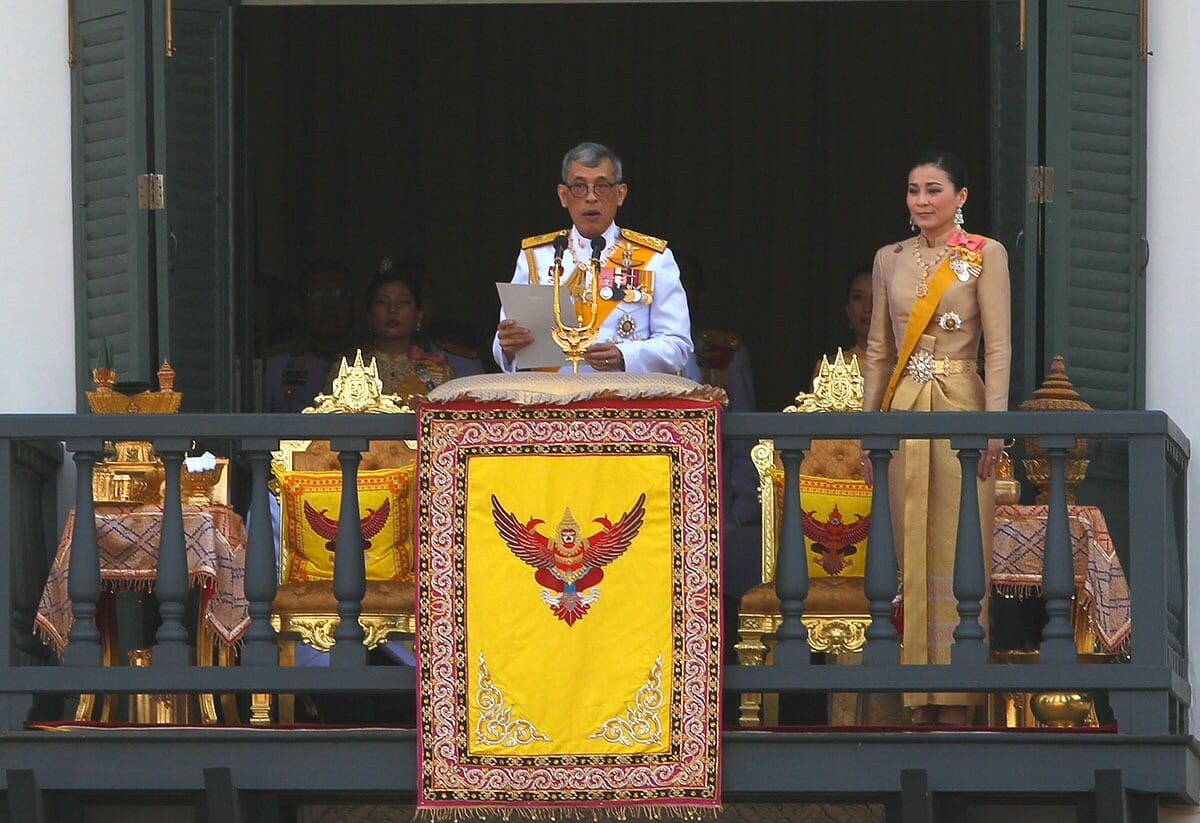 King Maha Vajiralongkorn Bodindradebayavarangkun making an address with Queen Suthida at his side. Seen in Bangkok May 6, 2019. Photo | Chaiwat Subprasom / Shutterstock.com

The divide and rule strategy, while seemingly serving to strengthen the throne, acts as an obstacle in building a political consensus. This makes any reconciliation between the two opposing parties unlikely in the post-coronation period. Recently, King Vajiralongkorn continued to penalise Thaksin by stripping him of royal decorations. This will thwart any attempt in bringing about consensus in the new reign.

The Thai Military: A Politicised Institution

The army is another important factor that will play its part in making or breaking any consensus. After almost five years under military rule, the junta is continuing to undermine political opponents rather than reconciling with them. The army, like the monarchy, has never invested in the electoral process. Simply, it fears that it would not be able to control the process. And the army is right, if one looks at the latest elections.

Like other politicised institutions, the army insists on its loyalty to the monarchy rather than the people. It has long lost any pretence of professionalism. The current army chief General Apirat Kongsompong, handpicked by Vajiralongkorn, has several times intervened in politics.

His latest discourse on ‘pretentious leftists’, meant to condemn the leaders of Future Forward Party for being ‘too liberal’, sent a strong message of the indefatigable duty of the army in defending the interests of the traditional elites. On his first day at work, he threatened the public with another coup should political chaos persist.

Political consensus is not only crucial in the context of domestic politics, but also for foreign allies. During the Bhumibol days, the consensus was extended beyond Thai borders. Foreign governments perceived Bhumibol as Thailand’s unifying force. Thai elites often toured their foreign allies to ensure them that supporting the monarchy was equal to promoting political stability. These foreign allies consequently lent sympathy to Bhumibol during critical times in the past.

Stability is a Thing of the Past

It is tricky to predict the trajectory of Thailand given how unfavourable the political conditions are to the building of consensus. Royal power has evidently been more absolute since the royal transition began, with Vajiralongkorn intervening in writing the constitution and taking over the superrich Crown Property Bureau.

After the coronation, this trend of growing royal absolutism is likely to continue. The further it grows, the more difficult consensus-making will become. The political stability of yesteryear is a thing of the past. The modus operandi is no longer based on compromises, but rather a zero-sum game strategy. When consensus is absent, political conflicts expectedly intensify.

This article was originally published at East Asia Forum https://www.eastasiaforum.org/2019/05/03/political-divisions-reign-in-thailand/. The version at FORSEA has been slightly revised to reflect the present situation in Thailand. FORSEA wishes to acknowledge East Asia Forum for the permission to reproduce this article.