“When you lose everything – your home, your career, your family – people around you (strangers) become most important.” Anyone concerned about shared humanity, I hope, will do his or her part by listening to Petro’s uncensored tales of what it means to live in the time of the crime against peace perpetrated on your national community.

“My English is not very good, but I want to do this,” was Petro’s response to my suggestion that he share his 1st hand experience of living through the first few weeks of the Russian invasion. All unfiltered by me as a host.

Petro did more than just fine on FORSEA Dialogue Series on Democratic Struggles on 8 April.

One of the most memorable moments during Petro’s war storytelling for me was when he said, “the hardest thing for me was not staying in Ukraine where there is no safety at all, but explaining to my wife Victoria why I should stay behind (and let the whole family leave).”

Yes, Ukrainian authorities bar all men between the ages of 18 and 60 from leaving the country and compel them to join the civil resistance, those only exempt are men with medical conditions and fathers of 3 or more children. As a father of three, Petro is exempt from this policy of Ukrainian resistance.

For two hours, Petro told a series of very powerful and riveting personal tales as a conscientious Ukrainian and a loving husband, beginning with the falls of missiles in his neighbourhood in Irping, a small town only a mile or two away from Bucha where the Russian troops massacred upward of 60 Ukrainian civilians, some execution-style. 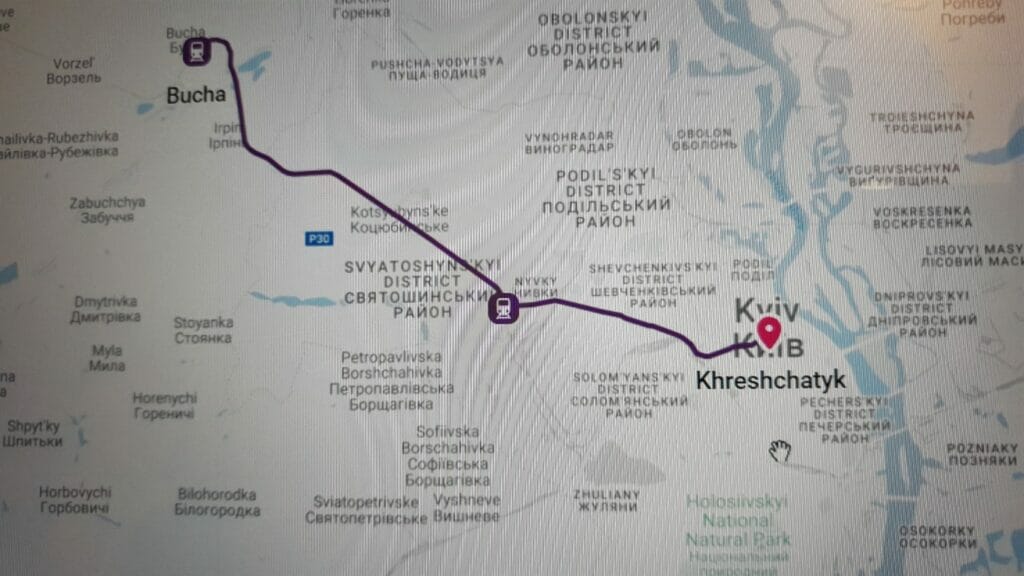 A map of rail line – 45-minutes in duration – running between Kyiv and Bucha, passing Irping.

Irping is 21 miles from Kyiv and is on the direct trainline between Bucha and the capital. The massacres could have taken place in Irping, instead of Bucha. A chilling thought that must have crossed Petro’s mind. It certainly did mine, when he talked about how close his town was where he and his wife Victoria were taking shelter in the basement of their house.

At the start of the Russian invasion, Petro’s parents from Kyiv fetched his three children and took them to a small Ukrainian village for refuge. He had no means of transport to get a family of five out of Irping while thousands of residents had hit the road, despite fuel shortage and miles of congestion. “It would take 2 days to travel 200 kilometres,” Petro mentioned.

Ukrainian military had also destroyed bridges en route to the capital in order to slow down or block the Russian advances, a factor that makes the self-evacuation of war-fleeing Ukrainians more complicated.

At their home in Irping, Petro and Victoria were not “just” taking care of themselves and their three children. After their children left for a safer hide-out, they still had pets – a dog and two cats –a young neighbour, a friend of their teenage daughter, who was completely shellshocked from the sights of Russian troops and the sounds of explosions from the fighting. The young woman was too afraid to leave their make-shift bunker.  Missiles that had travelled past by at low altitude were discernible by naked eye, he told me. 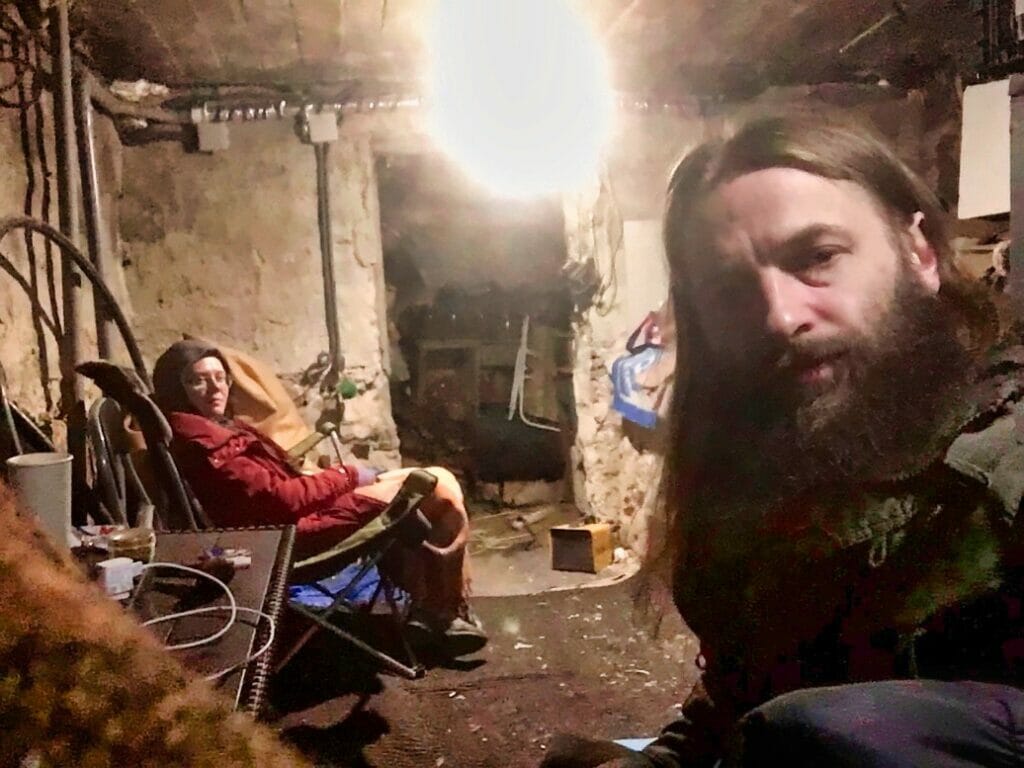 Petro and his wife Victoria, in their basement converted into a make-shift bomb shelter, February 2022.

“Nowhere in Ukraine is safe”, Petro said pointedly.  That is, since 24 February.

“Safety” here is relative, of course. But a tiny village away from the capital where the Ukrainian President Zalensky and his heavily guarded war cabinet buildings would be “legitimate targets” for Russian attacks would be a tad safer than the cluster of towns near Kyiv such as Irping and Bucha.

The international media, conventional and social media, are now becoming saturated with the All-Ukraine coverage. Those not in Europe, and not directly affected – beyond sharp hikes in food prices – by Putin’s war of aggression may be switching off. Too far away.

The recent vote on the US-led resolution to suspend Russian Federation from the United Nations Human Rights Council saw 93 member-states voting in favour, 58 abstentions and 24 that were in against the resolution: the world is NOT united – whatever accounts for this international disunity – as US President Joe Biden and his European counterparts, keep repeating. 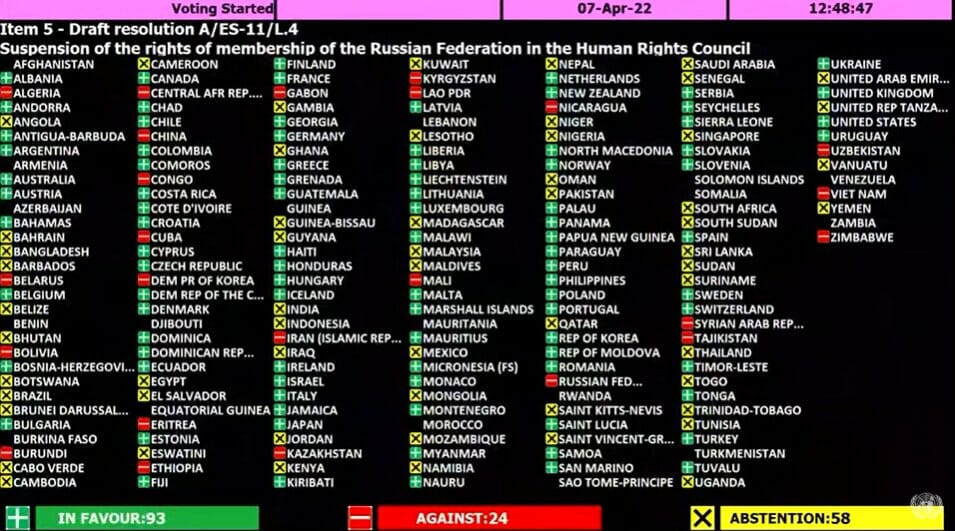 List of countries voting in favour, against, and abstentions on 7th April, 2022.

Whatever NATO-Russia geopolitics, and international economics of oil and gas, that may have triggered and fuelled the Russian war right on the eastern flank of the European Civilization with its predominantly eastern Orthodox Christianity, those of us who view as sacrosanct human rights and sovereignty of We the People – if not the states must offer Ukrainians and other groups in extreme distress (e.g., Palestinians, Myanmar, Uyghurs, Yemenese and Tigrayians) our human solidarity.

Some of the world’s most influential intellectuals of Jewish heritage have roots in the old Ukraine.

The renowned scholar, activist and public intellectual Noam Chomsky recently told Britain’s New Statesman that his father migrated out of Ukraine in order to avoid conscription into tsar’s armies while his mother was from Belarus.

In his acclaimed book East-West Street Philippe Sands, Gambia’s lead counsel in the Gambia vs. Myanmar genocide case at the UN’s court, detailed the common Ukrainian heritage of the two inventors of “crime against humanity” and “the crime of genocide”, Hersch Lauterpacht and Rafael Lemkin respectively. 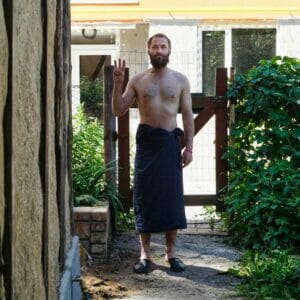 Petro at home, doing a 3-finger salute as a show of his solidarity with Myanmar’s Nway Oo or Spring Revolution, spring 2021.

There is nothing that separates Petro, a self-described Christian anarchist in his 40’s who views the land (the world) as God’s creation for different communities, and a godless Burmese anarchist thousands of miles away in exile in UK.

At the end of the day, we all share a desire for safety for our families, food on the table and a roof above our heads.

Beyond frightening personal experience Petro dissected the Russian war in Ukraine as having three interlocking “frontlines”: military, economic and information (Russian lies and propaganda versus Ukrainian fact-finding and fact-sharing).

Most certainly, characteristic of any criminal regime – genocidally motivated – Putin’s Foreign Minister Sergey Lavrov keeps telling blatant lies, blaming Ukrainians for targeting their own civilian populations or staging the massacres  – in the maternity hospital in Mariupol, Kramatorsk train station platform in the Donetsk region and the massacres in Bucha, Petro’s neighbourhood.

As a civilian with a talent in filmmaking, video-editing, and storytelling, Petro has picked his fight.

Personally, Ukraine entered my consciousness a quarter century before it hit international headlines with its Orange Revolution and more recently, Putin’s crime of aggression and war crimes.

My first Ukrainian friend was Maria, a young Ukrainian Jewish American undergraduate student at the University of Wisconsin at Madison in USA in the mid-1990’s, who was born in Chernobyl. She and her Ukrainian poet mother emigrated from Ukraine to Evanston, Illinois after the nuclear disaster. No doubt she must be distraught about the news of yet another national disaster – the real existential threat to the nation this time – that has struck her country of birth.

The day before Poland announced its first national pandemic lock-down, I flew in from London to take a group of 20 Burmese and international human rights activists and scholars concerned about Myanmar’s genocide of Rohingyas. Petro took the overnight train from Kyiv. 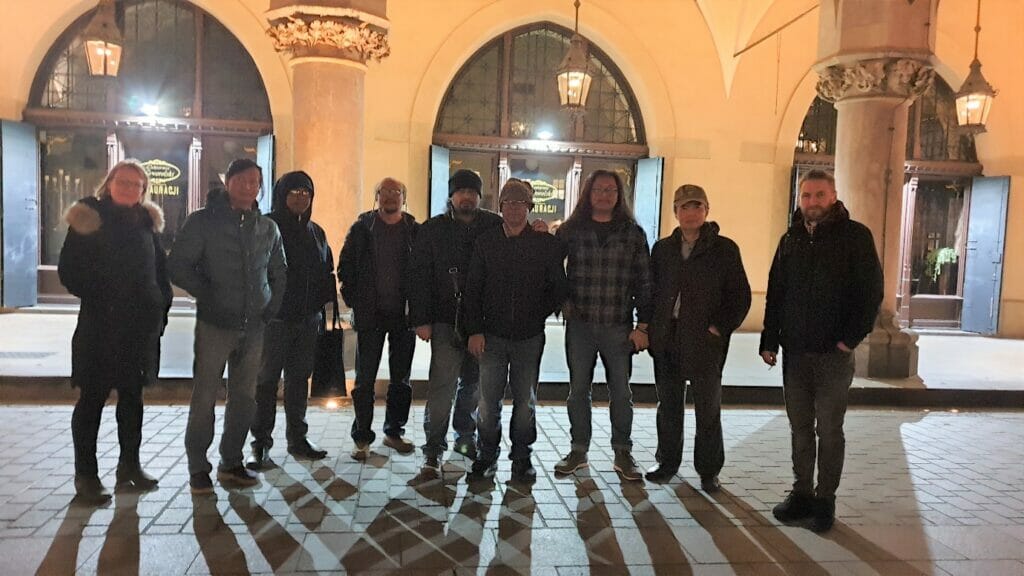 We were there for a two-days of group study at Auschwitz-Birkenau Museum, the world’s largest killing field, and the Jewish ghetto. Krakow was home to the largest and more vibrant Jewish community before the Nazi genocide.

Petro was there to record our study tour and group discussions and produce an educational film, finding parallel between my country’s 21st genocide against our own national minority – Rohingyas – and the Holocaust.

Petro and I had a breakfast meeting at this small hotel in a quiet corner in the Old Town Krakow before the group arrived from Burma, USA, Canada, and UK, and discussed how to go about our film-production, despite the lock-down. We weren’t discouraged by the fact that the lock-down applied to all state institutions including Auschwitz-Birkenau Museum, meaning our group would not be able to enter the usual sites inside the vast fenced museum compounds. 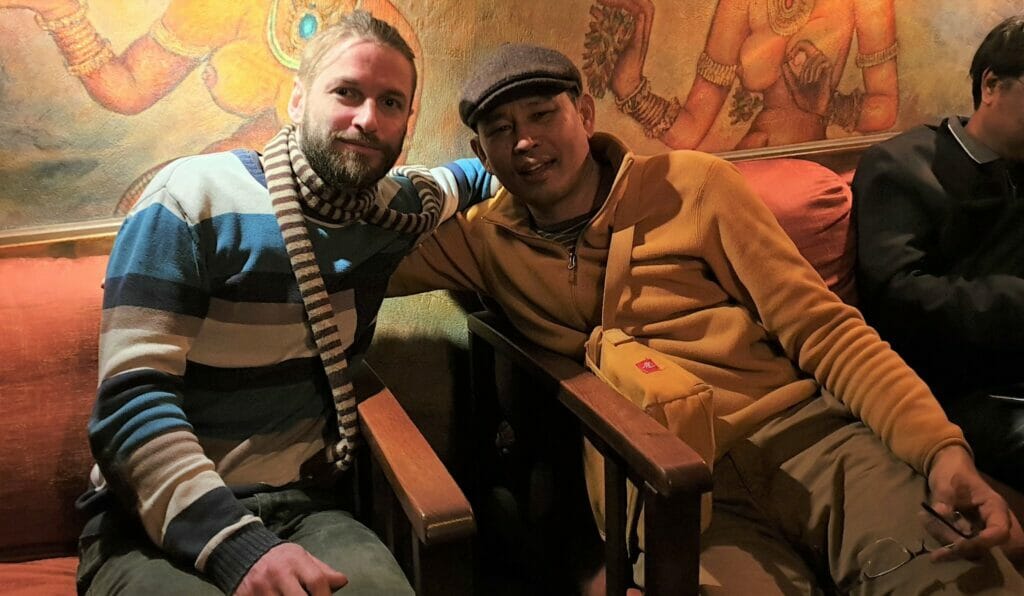 Over the course of the next two days, we bonded, drinking Polish vodka at the Buddha Bar in the evenings after dinners and stepped out of cafes and restaurants to roll our cigarettes and talking anarchism.

Now Petro has chosen to fight his war against the Nazi-like blatant Russian propaganda using his professional medium of film and videography. I too must do my part, however seemingly small that part might be.

Anyone concerned about shared humanity, I hope, will do his or her part by listening to Petro’s uncensored tales of what it means to live in the time of the crime against peace perpetrated on your national community.

“When you lose everything – your home, your career, family – people around you (strangers) become most important,” was one of Petro’s memorable reflections.

Petro, my anarchist brother, has a vision for the post-invasion future for all of us: “We need a new system for all humans.  What we have in this world is not working.”