In April, 42 international journalists signed an open letter to Singapore’s Communications and Information Minister, expressing concern over government plans to push through a draconian “fake news” bill that they said would stifle freedom of speech.

The succeeding events appear to have borne out the journalists’ deepest concerns, with the government almost immediately using the legislation as a cudgel against political critics. Three of four actions taken since the bill went into law on November 26 have been used against politicians from Singapore’s battered opposition parties. The three have been told their online posts must carry banners saying they contain false information.

Known as the Protection from Online Falsehoods and Manipulation Bill, it allows for a maximum S$1 million in fines (US$740,000) and 10 years in prison for owners and administrators of websites that fail to comply with official requests to correct or remove content ruled as objectionable. That includes the major social media platforms Twitter, Google and Facebook, all of which objected vainly to its passage.

The law grants all government ministers the power to determine if information is false and if it is harming the public interest and to issue takedown or correction notices. Although websites would have the right to request a judicial review, that is only after the takedown orders have been issued. The Singapore government has argued that it does not require the poster of the alleged “fake news” to take down the post, but just to add the government correction and publish the government anti-fake news order.

A government web page called “Factually” was put online as soon as the law took effect in October, claiming to present the “correct facts” as opposed to what the law calls “online falsehoods and manipulation” and displays each “corrected” item with the word “FALSE” stamped on it in large red letters.

Since the early 1980s, no court in Singapore has ever dared to reverse a government decision concerning libel actions or contempt of court against publications criticizing either the government or the Lee family, which has dominated politics in the city state since its birth in 1965. It is highly unlikely that any bloggers are going to win in the near future. The New York Times, the Wall Street Journal, Time Management, the Far Eastern Economic Review, the Financial Times and CBS News, among others, have either lost out or knuckled under when faced with court charges. 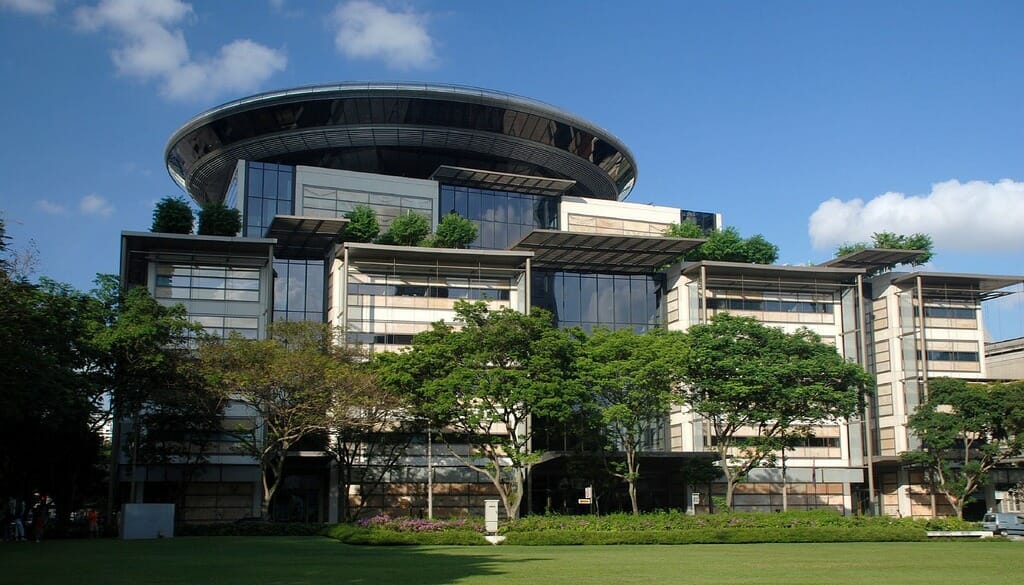 The Supreme Court Building in Singapore. The disc at the top of the building houses the courtroom of the Court of Appeal, Singapore’s final appellate court.

The latest to duke it out with Singapore is the Washington Post, which on December 2 printed criticism of the law using a quote from Phil Robertson, Human Rights Watch’s Asia representative. After the Singapore ambassador to Washington wrote a letter to the editor criticizing the Post’s story and the Post didn’t print the whole thing, the government riposted with a report that the US publication’s refusal to do so means it is “perpetuating false allegations” about the fake news law. That is a tactic that goes back decades, with the government bringing action against publications for not giving the government its full due. It remains to be seen if the government now pursues action against the Post.

Former US President Barack Obama, in Singapore earlier this week to attend a charity gala at the Ritz-Carlton Hotel, issued an oblique criticism of the government during a Q&A session with reporters, saying that while governments have a role to play in arresting the spread of fake news, they shouldn’t be the only arbiters of what is false. Social media companies, the former president said, play an editorial role as well in deciding what information should be prioritized and what people see.

The latest incident came on December 16 when Lim Tean, a lawyer and founding member of the People’s Voice, the 11th party to have sprung up to attempt to blunt the domination of the People’s Action Party, was ordered to correct two Facebook posts related to the Ministry of Education’s support policies for local and foreign students. Lim responded defending his initial post, saying “it is clear to me that the [Protection from Online Falsehoods and Manipulation Act] is being used by this government ahead of the upcoming general election to silence its opponents and chill public discussion of unpopular government policies.”

In November, opposition politician Brad Bowyer, an Englishman who has since taken Singaporean citizenship, was ordered by Finance Minister and Deputy Prime Minister Heng Swee Keat to make a “correction” to a posting on his Facebook page which was alleged to have smeared the reputation of the Government Investment Corporation (GIC) and Temasek, also a government investment company, by making “false and misleading statements.”

Bowyer, a member of the Progress Singapore Party, was required to post a 14-point “rebuttal” against his own post. An investigation of the complaint by Asia Sentinel determined that most of his assertions were true.

The law has been criticized by a broad range of journalism and human rights organizations as well as social media platforms including Google, Facebook and Twitter, which have expressed concerns. But while Facebook said it was concerned that the law grants broad powers to the government, it has bent to the island republic’s demands and appended the banners saying the posts contained fake information.

US President Donald Trump popularized the “fake news” mantra as he has fought criticism of his misuses in office. But a long list of other countries from Nigeria to Malaysia and well beyond have pushed through their own legislation, many of them having taken a look at Singapore’s wording and passed their own “fake news” bills into law, leading to concerns that threats to political and press freedom are spreading rapidly across the world.

“Spanning from Brazil to South Korea, these efforts raise questions about infringing free speech guarantees and are frequently victims of uncertainty,” according to the US-based Poynter Institute. “The muddying of the definition of fake news, the relative reach of which is still being studied, hinders governments’ ability to accomplish anything effective.”

The Singapore government, facing election in 2021 – but widely expected in 2020 – with the ruling Lee family in a vicious feud between siblings and the economy beginning to flag, over the past year has grown considerably less and less tolerant of anything that even appears to smack of criticism, filing defamation charges against critics, closing temporarily the city-state’s longest-running and most prominent independent news site, The Online Citizen and taking other actions against bloggers. For the first time since Singapore became a nation the government is expected to not be headed by a member of the Lee political dynasty or someone closely aligned with it in the next election.

The Paris-based Reporters Without Borders, in a prepared statement, said it is “is appalled by the totalitarian aspects of Singapore’s new, highly controversial ‘anti-fake news’ law and decried its use in ordering corrections” to Facebook posts. That was echoed by the New York-based Committee to Protect Journalists, which called it a “clear and present danger to online press freedom.”

Last April, RSF published an analysis of the draft version of this law, saying it had the potential to be a horrifying tool for censorship and intimidation. The press freedom organization pointed out that Singapore is ranked 151st out of 180 countries in RSF’s 2019 World Press Freedom Index.

This article dated December 18, 2019 is republished from Asia Sentinel