Military uniforms are out, the civilian look is in. Window dressing aside: The five-year military rule has done nothing but deepen the militarisation of the Thai political landscape.

The much-anticipated Thai elections will be held Sunday March 24, 2019, the first nationwide polls since the coup of 2014 that overthrew the elected government of Yingluck Shinawatra. In the period leading up to the landmark vote, the Thai generals have been removing their military uniforms and switching to a new civilian look, suggesting a welcomed civilianisation of Thai politics.

Legitimising the Militarisation of Thai politics

Aside from the window dressing, the almost five-year rule under the military has done nothing but deepen the militarisation of the Thai political landscape. Today’s civilian look is a switch of camouflage, yet it’s just another new military uniform that cloaks the continued domination of power by the political elites in the hands of the Thai army. This observation assists in predicting the outcome of the Sunday elections through which the established power will dictate the polls.

Essentially, the elections will serve to legitimise the militarisation of Thai politics. 51 million people are eligible to vote, of which 7 million of those are first time voters. There are some 77 political parties entering the electoral race, markedly divided into pro-junta and anti-junta camps. The conditions set out in the constitutions, however, clearly favour pro-junta parties, reiterating the likelihood of the return of an undemocratic climate after the elections.

The 2017 constitution, written by the military-appointed committees, has been designed to prevent powerful political parties, like that of Thaksin, who himself was also toppled in a coup in 2006, from forming the next government. In essence, the constitution allows the Thai military to appoint the 250-seat senate in its entirety to vote on the premiership appointment along with the 500-seat House of Representatives. In practice, the National Council for Peace and Order (NCPO), the governing body of the coup, can pick its own prime minister if their political allies win just a quarter of the House seats. 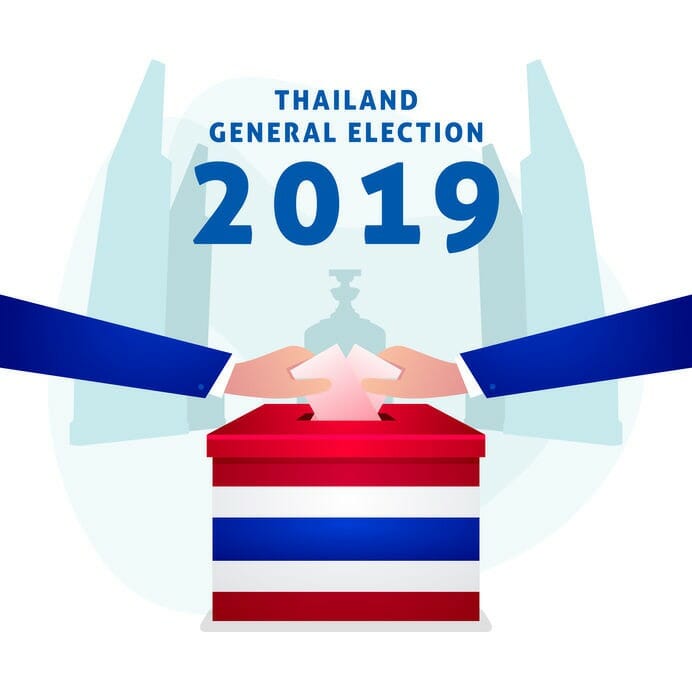 Such conditions present the most likely outcome of the Sunday elections: a new government in support of the established power under the Palang Pracharath Party, possibly yet again led by Prime Minister General Prayuth Chan-ocha. By then a civilian, Prayuth will be backed by his promoters among the conservatives, the army and the palace. Under this circumstance, Thailand’s path towards democracy will remain rocky. Order and peace might be guaranteed but only through suppression.

The other less possible outcome would witness the victory of the anti-junta parties. Thaksin-influenced Pheu Thai Party is likely to win big in the far-flung north and northeast regions. But the hurdles are incredible. The Pheu Thai would have to attain more than 376 seats to overcome senate votes should it be able to form its own government and nominate the premier.

The civilian look; a switch of camouflage to cloak the continued domination by the Thai army.

Of course, the Pheu Thai could team up with other anti-junta parties to make up a democratic coalition. But even if this option is possible, the democratic coalition might still fail to secure enough seats in the House to prevent Prayuth from becoming prime minister. As David Streckfuss points out, in that case, the majority would strangely become the majority opposition against a minority government. Neither of these outcomes would lead Thailand out of its long political deadlock.

A key to determining the well-being of Thai politics in the post-election period is also the role of the monarchy. It will be the first elected government under the new reign of King Vajiralongkorn. Signs suggest an intricate relationship between the king and the junta. After all, the coup was supposedly staged to manage the royal succession, which, as the conservative power was well aware, could be manipulated by the Thaksin faction. This explains why, right at the beginning, the coup and the new constitution that followed was been driven by fear of Thaksin. The fear was most palpable in the final weeks before the polls.

Last month, Thaksin challenged the palace by nominating Princess Ubolratana Rajakanya Sirivadhana Varnavadi, as prime minister for his sprinter party, Thai Raksa Chart. Ubolratana, a royal outcast, was stripped of all royal titles after marrying an American. The ties between Thaksin and Ubolratana have grown over time, so too has palace unease with their closeness.

Hours after the announcement of her candidacy, King Vajiralongkorn, Ubolratana’s younger brother, issued a damning royal statement crashing her political ambition and condemning Thaksin for politicising the monarchy. The royal statement set the tone leading to the dissolution of the Thai Raksa Chart Party as the Constitutional Court did the king’s bidding. In other words, the king continues to shape Thai politics according to his own interests.

For years, establishment forces have invested little in the electoral process. They prefer to employ unconstitutional instruments to achieve political power. Thaksin’s multiple electoral successes have further alienated them from participatory politics. The result saw two coups within 8 years, in 2006 and 2014.

The upcoming election, hence, exposes a myriad of illegitimate tactics to stage-manage the electoral process. Allies of the junta present themselves as representatives of democracy; even when in reality, they have striven to support the militarisation of politics. The Thai polls promise no democratic revival. There is little reason for celebration.