The red-tagging and illegal arrests of three unionists on February 27 is the latest addition to the long list of intensified attacks against the working class. Three are officers of the Musahamat Farm Workers Union-Kilusang Mayo Uno, an affiliate of the International Trade Union Confederation (ITUC), Union President Esperedion Cabaltera and Vice President Richard Genabe were held under custody of the 10th Infantry Battalion of the Armed Forces of the Philippines in the Municipality of Mawab, Compostela Valley in Davao Region, Mindanao. Meanwhile, the union’s Secretary General, Ronaldo Rosales was held against his will by the 71st IB in Pantukan.

Attacks Against the Working Class

According to the Center for Trade Union and Human Rights (CTUHR), union president Cabaltera and vice president Genabe went to the police station on February 26, 2019 to clear their names from a “military list” and file a complaint against unidentified armed men (alleged military) who had stormed their homes. They were illegally arrested a day later. Kilusang Mayo Uno-Southern Mindanao Region reports that the union leaders were released on February 28 after enduring interrogation and torture. The military threatened to kill them should they continue their union activities. They were also forced to sign a paper claiming that they are surrenderees of the NPA, the armed wing of the Communist Party of the Philippines. On March 6, CTUHR released an alert via Workers Rights Watch that elements of the AFP 71st IB coerced 153 workers of Musahamat to resign from their union, these included leaders Cabaltera and Genabe.

Documentation from fact-finding missions of independent human and trade union rights organisations reveal that AFP members were also responsible for the torture and bloody attempt to burn two small-scale mine workers in 2017. The young workers, namely Janry Mensis, then 22, and the then 16-year old “Jerry”, are members of Kahugpungan sa mga Mag-uuma sa Maco and were wrongfully accused of being members of the New People’s Army (NPA). They were taken to the camp of 71st IB where for several days they endured torture and eventually escaped before being burned alive.

Musahamat Farms II Inc. is a subsidiary of Kuwait-owned Sabel International Group W.LL that started operating in Davao region in 2008. It is just one of the many multinational companies in southern Philippines that produce and export bananas and other fruits to Asia, Europe and the Middle East. The industry’s banana export surged to USD 1.128 billion in 2017 with the Davao region’s output topping 900 thousand metric tons. 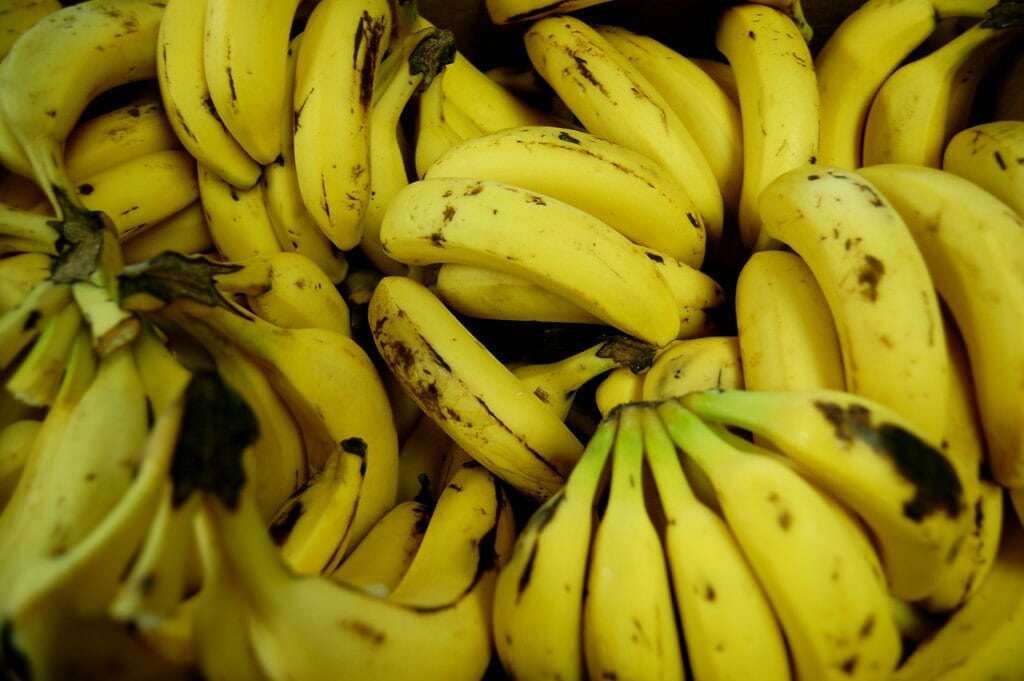 But why attack the leadership of the Musahamat Farm Workers Union? They had been merely advancing the legitimate labor demands of banana plantation workers in a southern province, those people savagely exploited by big capitalists. According to Unyon ng mga Manggagawa sa Agrikultura (national organization of agricultural workers in the Philippines), state-sponsored harassment and vilification of the unionists and workers in Musahamat started on August 22, 2014 during the term of former President Benigno Aquino III. This led to the February 2015 complaint with the International Labor Organization (ILO) against military officials who forced union officers to present themselves as NPA surrenderees.

In March 2016, the union, then representing more than 320 banana plantation workers, lodged a complaint to the Department of Labor and Employment (DOLE) against unfair labor practices including union busting, withholding of union dues, illegal suspension, and termination of union officers and members by management of Musahamat. The unions also voted in favour of a strike after many failed negotiations with Musahamat management. But continuous threats and intimidation from the management and red tagging of the military prevented the unionists in exercising their rights enshrined in the 1987 Philippine Constitution and recognised under fundamental ILO Conventions ratified by the Philippines. The workers built their protest camp but it was peppered with bullets from two unidentified gunmen at midnight on April 2 that year, narrowly missing three unionists.

The union won the case in 2017 after they successfully striked in protest against the dismissal of two union leaders. Duterte had since been elected but the conditions of banana plantation workers remain dire. It was also the same year that a number of banana plantation unions in Compostela Valley Province held a series of strike against several companies demanding improved working conditions, fair wages and to oppose the swell of union busting and militarisation of the industry. With the Musahamat Farm Workers Union, Shin Sun Workers Union, Fresh Max Workers Union and Maparat Montevista Workers Union involved, numbers totalled more than 600 striking workers. Eight more unions comprising of more than 700 workers conducted sympathy strikes in their respective workplaces to amplify the unions’ struggles. Most impressive is how they stood firm and resolute against Duterte’s Martial Law in Mindanao, especially with its extension in place until the end of 2019.

Cabaltera, Genabe and Rosales were illegally arrested based on perverse allegations that they were communist leaders when in fact, they were duly elected officers of their union, and the sole and exclusive bargaining agents with Musahamat Farms II. President Rodrigo Duterte’s pronouncement in 2017 maliciously tagged Kilusang Mayo Uno (KMU) and member trade unions as a legal front of the Communist Party of the Philippines. Subsequently he declared the latter a terrorist organisation under Proclamation 374 (prescriptive of the Human Security Act of 2007 [RA 9373]) and the Terrorism Financing Prevention and Suppression Act of 2012 (RA 10168),  citing the AFP’s whole-of-nation approach (to defeat communists) on top of intensified surveillance and profiling by the National Intelligence Coordinating Agency (Nica). The action is a clear attempt to criminalise the legitimate work of unionists in their struggle to advance the socio-economic interests for ordinary working people.

The national trade union center to which Musahamat Farm Workers Union belongs, KMU, has strongly condemned the tyranny and repression since its founding on May 1, 1980, during the US-backed regime of former dictator Ferdinand Marcos in the Philippines. Moving to the present, tyranny has had a facelift under Oplan Peace and Operation Pacific Eagle Philippines perpetrated by the US-Duterte, part of the US War on Terror around the world. The US used the five-month Marawi City war in Mindanao to include the country in its operations in Iraq and Syria, employing the “coalition operations” tactic (including many other governments) in Iraq and Syria, and bilateral operation (US government and the Duterte government) in the Philippines. 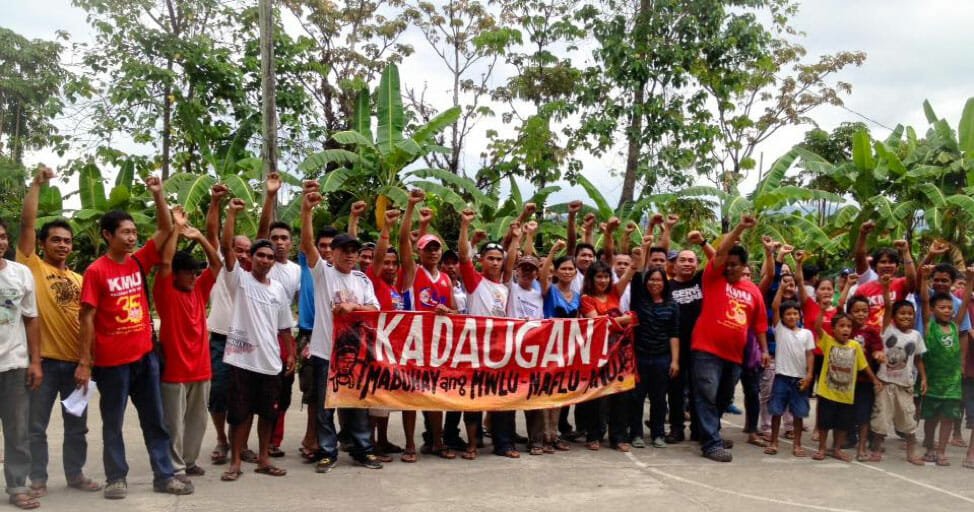 File photos from KMU-SMR. Permission for use granted.

Duterte’s tyrannical rule has completely exposed his subservience to US and the global capitalist system, with the rise of China and weakening of US hegemony. To consolidate US socio-political and neoliberal control over its neo-colony, the supermajority in the House of Representatives approved the extension of martial law in Mindanao. The militarisation countrywide was followed by the ouster of the Supreme Court chief justice, termination of the peace talks between the Government of the Republic of the Philippines and the National Democratic Front of the Philippines in conjunction with the abolition of socio-economic reforms, displacement of thousands of indigenous peoples, red-tagging of progressive forces, and rising number of political killings as well as gross trade union and human rights violations.

The US-Duterte regime’s war against the working class is further played out with the easing of investment restrictions and continuing implementation of Duterte’s so-called 10-point Socioeconomic Agenda, Philippine Development Plan 2017-2022, and AmBisyon Natin 2040 that remain favorable only to big comprador-landlords and foreign investors that continue to exploit the cheap labor in the country at the expense of workers’ wages, job security, and trade union rights. Take the case of Musahamat workers who are extremely overworked, performing five operations in a 3-hectare farm earning only an average of PHP 365 (USD 6.9) for at least a 12-hour back-breaking work day.

On March 13, the Armed Forces of the Philippines held a press briefing outlining how Duterte is geared to dismantle the democracy long fought for and defended by the Filipino working class. The right to freedom of association and to peaceably assemble is clearly under intensified attack. Citing data from the Center for Trade Union and Human Rights, US-Duterte regime’s orchestrated attack shows an increased number in cases of threats, harassment and intimidation towards workers and the urban poor: from 88 in former President Noynoy Aquino’s six-year term to 500 in the first year of Duterte alone. These rights are recognised under fundamental ILO Conventions ratified by the Philippines, which the military and police should respect at all times.

The Filipino workers and unionists, together with the broad people’s movement will not bow down to those who undermine workers’ struggles. The resistance against neoliberal attacks and state fascism strengthens as the crisis of the ruling system continues to worsen. The fight for what is socially just continues.

Stop the attacks! End impunity on trade union and human rights violations, unionists are not terrorists!

See the EILER Facebook page for information about its mission to actively promote workers’ initiatives for self-organization and empowerment through increasing participation in society’s economic, political and cultural life in the Philippines.