In recent days, the king, who rules as Rama X, the latest in the 237-year old Chakri dynasty, has ordered the 1st and 11th Thai infantry regiments to be transferred out of the Ministry of Defense to his direct command without asking consent of the parliament or the military. For what purpose is unknown, but the two regiments join a considerable private army that Vajiralongkorn has been amassing since the time he was the crown prince.

That, and a long series of other absolutist moves, has people in Bangkok deeply concerned over what he may do next. At the same time, there is increasingly open resentment on the country’s tightly controlled social media over the behavior of the royals and the military.

Shortly after his accession to the throne, the king took charge of the US$60 billion-plus Crown Property Bureau, which manages the holdings of the monarchy and controls huge swathes of land in Bangkok. He is also said to have taken over prime property formerly occupied by the 44-year-old parliament building, which was vacated when a massively expensive, corruption-plagued new edifice was planned. He now controls some of the most expensive land in Bangkok and is able to use it at his own whim.

Vajiralongkorn’s elevation to the throne had been anticipated for years but was universally dreaded by Thailand’s power elite. But they made a devil’s bargain in which the military, the perpetrator of 19 coups d’etat since 1932, would gain legitimacy while at the same time providing acquiescence to prop up the monarchy whose throne was delivered to a half-mad king who seemingly knows no boundaries. He spends virtually all of his time in Germany, appearing in Thailand mostly for ceremonies aboard either his own 737 jet or commandeers aircraft from the government-controlled Thai Airways International although he has tightened control over government functions to make himself an unquestioned leader. He also named one of his consorts, Suditha, a Royal Thai Army general and later deputy commander of the king’s personal guard.

The 1932 coup, by a small group of civilians and military officers, has long been known as a turning point in Thai history, ending 150 years of absolute power under the Chakri dynasty and changing the system of government to a constitutional monarchy and civil government. The revolution was commemorated by a 30-cm. brass plaque embedded in the asphalt of the Royal Plaza where the revolt took place, during which a declaration condemning the absolute monarchy was read. That plaque was mysteriously dug up and disappeared with Vajiralongkorn’s accession to the throne.

This year, when the prime minister and cabinet ministers took the oath of office, which included a pledge of loyalty to the king and to perform duties for the benefit of the country and the people, a final sentence swearing to uphold and comply with the constitution disappeared. Prime Minister Prayuth Chan-ocha said the omission was unintentional. Many in Bangkok believe the king ordered it stricken. 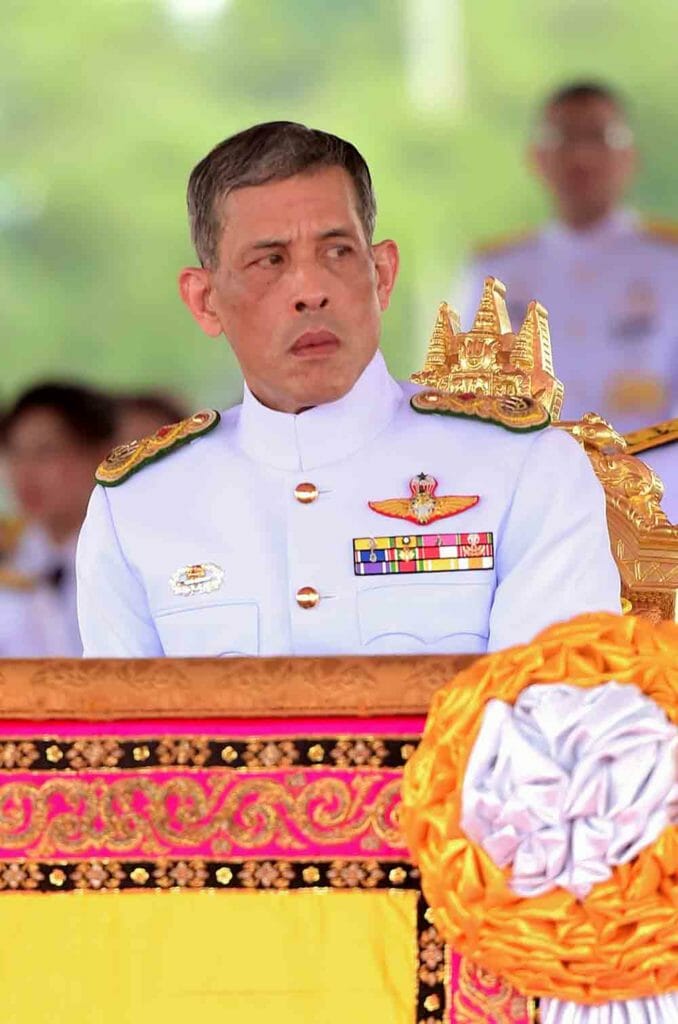 The king has long been feared in Thailand as frighteningly erratic. Cables from the US Embassy in Bangkok released by Wikileaks several years ago, for instance, indicated that many in the power structure didn’t view the prince as a suitable successor to his father Bhumibol Adulyadej. One cable described the crown prince’s naming his dog Foo Foo a marshal in the Royal Thai Air Force and allowing the dog to graze on food atop tables at an official banquet. A leaked video of a birthday for Foo Foo, complete with a naked Princess Srirasmi, his now-discarded wife, has circulated widely in Thailand. Foo Foo’s 2015 death was followed by four days of Buddhist funeral rites and the dog’s cremation.

Nonetheless, veneration ordered by the military under threat of the country’s draconian lese-majesté law forbidding insult to the monarchy on pain of 15-year sentences, has reached astonishing levels, with photos of commoners even crawling beneath portraits of the king. People have dared punishment for even not showing enough respect to distant relatives of the king. Prayuth and top army officials routinely crawl on the floor in his presence.

The king is said to maintain a private dungeon at his Thawee Wattana palace where officials are believed routinely disappear under gruesome circumstances although there is no independent confirmation. Even when he was crown prince, purges included Major General Phisitsak Seniwong Na Ayutthaya, the prince’s own chief bodyguard, who allegedly hanged himself. Others included Police Major Prakrom Warunprapa, who was also said to have hanged himself in jail. Still others fled overseas to escape his wrath. Sources in Bangkok have said officials have been beaten and tortured.

The military and the palace have had what is described as a symbiotic relationship since the 1960’s that was based on mutual benefit and respect, with the military gaining the patronage and pride of being the protector of the monarch, and the impunity that goes along it, while the palace was assured of a bedrock of supporters with arms prepared to act if needed. The living example of that was Prem Tinsulanonda, the onetime army chief who subsequently served as prime minister and went on to head the royalty’s privy council, remaining deeply influential almost until his death at age 98 in May this year.

The alliance was forged during the challenge of the Communist Party of Thailand, which wanted to abolish the monarchy, and bolstered by the Americans who saw both military and monarchy as pillars to prevent Thailand becoming the next domino to fall. King Bhumibol, who ruled Thailand as Rama IX for more than 70 years from 1946, is said to have recognized the importance of the partnership, albeit with the palace as the senior partner and ultimate commander.

However, Rama X is said to be determined to return Thailand to pre-1932 conditions – hence the disappearance of the plaque and the altering of the oath of office – believing all Thais exist solely to serve him including the military.

“What is happening now is a fundamental re-altering of the palace-military relationship as Rama X pursues his dream of being an absolute monarch who rules completely unchallenged,” said a source in Bangkok who asked to remain completely anonymous including not providing his occupation in print. “Prayuth, Deputy Prime Minister Prawit Wongsuwan, and the other members of the Burapha Phayak (Eastern Tigers) Queen’s Guard units are prepared to let this happen — partly out of their ultra-loyalist beliefs in the paramount importance of the monarchy, and partly out of the need to save their own skins.”

As the disappearance of top officials indicates, Rama X knows he must have loyal troops and is packing the military command with his loyalists. He is believed to be creating joint military-police intelligence units, shock troop units that will be prepared to crack down on protesters, and running roughshod over command arrangements at the Ministry of Defense.

“Those who object face at best being cashiered – and at worst being offered a trip to the dungeon where no one can save them,” another source told Asia Sentinel.

“It is a dire situation and the growing fear among people in the know is palpable,” a well-placed source said. “Informed observers are all saying that Thailand is heading for very dark days ahead.”

Banner Image: Bangkok, Thailand – May 6, 2019: Thailand’s King Maha Vajiralongkorn is seen at the balcony of Suddhaisavarya Prasad Hall of the Grand Palace as he grants a public audience.  Image SPhotograph / Shutterstock.com