From FORSEA Dialogue on Democratic Struggles: Padoh Saw Taw Nee of KNU and Ma Ei Thinzar Maung of NUG welcome US Government’s Genocide Determination and urges the release of $1 billion Myanmar People’s Fund for the Revolution.

In the English language part of FORSEA Dialogue Series on Democratic Struggles LIVE, Ma Ei Thinzar Maung,  Myarnmar Recipient of US Secretary of State’s International Women of Courage Award for 2022 and Deputy MInister for Women, Children and Social Welfare with the National Unity Government of Myanmar, the democratic government in exile, and Padoh Saw Taw Nee, head of Foreign Affairs, Karen National Union, the country’s oldest Ethnic Resistance Organization (founded on 5 February 1947) welcomed yesterday’s announcement by US Secretary of State Anthony Blinken that on behalf of the United States Government, he had made the genocide “determination” – the legalese for recognizing a genocide by its international legal name – on Myanmar’s large-scale and violent purges of Rohingya  minority in 2016 and 2017.

The two revolutionary leaders from two different generations have united in  urging the United States government to un-freeze $1 billion Myanmar fund held in the US financial institutions, frozen by US President Joe Biden following the military coup last February.

Both guests spelled out clearly the desperate need for revolutionary fund for the 1-year-old armed resistance aimed at defeating and dismantling the Burmese military – which Myanmar people view as a Fascist-like howngrown terrorist occupier of their country and openly requests material assistance such as anti-air craft weapons and munition for self-defence of ethnic resistance organizations and People’s Defence Forces, as well as for the protection of 800,000 war IDPs (Internally Displaced Persons) .

They pointed out that Russia has provided training to thousands of Myanmar terrorists (in Moscow and St Peterspberg) and continue to supply the terrorist military regime with arms and aicraft. 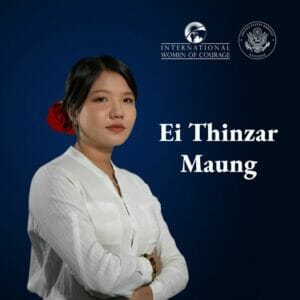 Daw Ei Thinzar Maung is an inspiring and influential pro-democracy voice who emerged as a symbol of peaceful public resistance just days after the February 1, 2021, coup d’état, Ei Thinzar Maung serves as Burma’s pro-democracy opposition NUG Deputy Minister for Women, Youths, and Children Affairs. Her human rights activities on behalf of minority groups, including Rohingya, have long promoted the vision of an inclusive multi-party democracy for Burma that respects human rights; she was imprisoned in 2015 for protesting a law that included a ban on student unions and teaching in ethnic minority languages. Post-coup, her work to support peaceful pro-democracy activism like the Civil Disobedience Movement and youth engagement has resulted in the regime issuing a warrant for her arrest. Although forced into hiding, she remains committed to democracy and continues to work for a strong, inclusive, and democratic Burma that respects human rights. 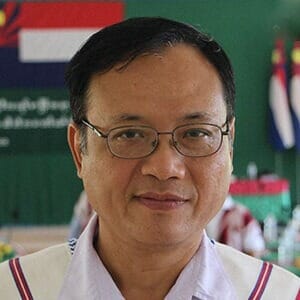 Padoh Saw Taw Nee is a member of the Central Standing Committee (CSC) of the Karen National Union (KNU). The KNU is a long-standing organization, which was formed on the 5th February 1947, and is stru ggling for the rights of equality and self-determination for the Karen people and the democratic rights in Burma (Myanmar).

Please see below for background information