ASEAN Defence Ministries could work out a Humanitarian Task Force, with Cambodia as a natural leader. The post-civil war Cambodian leadership of Prime Minister Hun Sen has decades of experience working with external actors, from UN to China. ​​This proposal could be attractive to both China and other immediate neighbours.

Myanmar has been ASEAN’s proverbial Black Sheep, standing as it does as a major obstacle for full cooperation among ASEAN’s 10-members and the prime source of sustained international criticisms towards ASEAN as a regional bloc. This has been the case since the bloc fast-tracked the then international pariah into its ranks in 1997. In the face of a lack of a unified, effective and comprehensive ASEAN-led approach, Myanmar regime continues to be disdainful and defiant towards ASEAN’s “family approach”.

​​The military regime has been emboldened by the recent meeting between the regime head Min Aung Hlaing and Russian Foreign Minister Lavrov in Naypyidaw and signing of nuclear technical cooperation with Moscow in July this year.

The nuclear cooperation deal signed in Moscow during Myanmar regime head Min Aung Hlaing’s “private visit” was a move designed to balance Myanmar’s reliance on China for veto-protection at the Security Council. Like the WWII Croatian Fascist leader Ante Pavelić and the Ustaše, the Crotian Fascist party, that sought to extract optimal gains from the greater Fascist powers of Italy and Germany, Myanmar generals and the Tatmadaw or the military, have been playing “a dual proxy” to Moscow and Beijing for the last 20 years.

As such, the Burmese military dictators in Naypyidaw have enjoyed a protection of sorts in the form of the “China-Russia double-veto” since 2007 and as late as May this year.

The regimes of Xi and Putin will more than likely shoot down any potentially impactful actions by the Security Council, including the calls for global arms embargo, the Council’s referral of Myanmar to the International Criminal Court, and any other meaningful ideas. ​​

The regime has also thumbed its nose at the United Nations Special Envoy Dr Noelene Heyzer’s official push for dialogue and leniency with regards to Aung San Suu Kyi while escalating the attacks on national minorities immediately after her meeting with the regime head Min Aung Hlaing. It sentenced Aung San Suu Kyi to a further 6 years on charges of corruption on 15 August and an additional sentence of 3-years imprisonment with hard labour last week. h\

The regime’s judicial process is a complete farce, and yet the farce is deployed to double down on the regime’s defiance of both the UN and ASEAN.

Yet ASEAN is neither as completely toothless nor as utterly impotent as it has been made out to be. 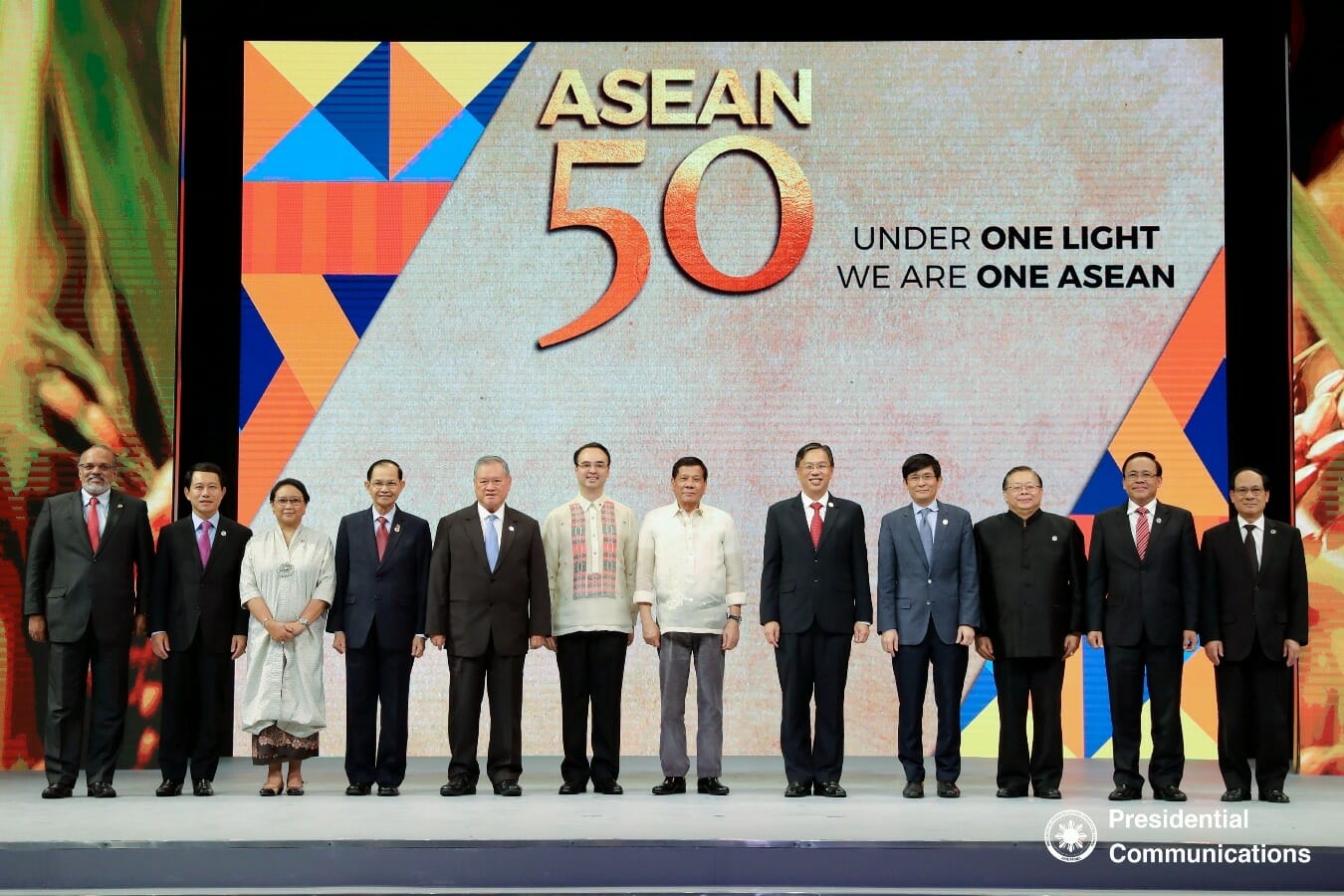 Philippine President Rodrigo Duterte poses for a photo with the ASEAN foreign ministers during the 50th anniversary of the group’s foundation on 8 August 2017. Wikipedia Commons

There exists a potentially strategic way for the bloc to tackle this seemingly intractable problem. ASEAN needs to reframe the policy discussions away from the current push for an inclusive political dialogue with all resistance groups, and instead move towards one that focuses on the very real problem of “human security” or lack of it.

No Myanmar person or community in Myanmar is safe as long as the war between the regime and the rest of the society continues to escalate. In the strife-ridden Myanmar today, the complete absence of fundamental safety of human persons, irrespective of their political affiliation, residence, or group identities has arisen from the military’s inability to re-impose control, in the face of the widespread armed resistance, over the State organs or maintain a functioning state.

Human Security is an essential pillar of political stability in any country. The presence of human security facilitates political stability and helps to enable livelihoods. The coup has resulted in the total absence of such security for the people. A regime that is waging a war against its own people cannot be expected to respect the life, liberty and human rights of 50-million of its subjects.

Consequently, ASEAN should recalibrate its approach from unproductive pressuring of the intransigent regime to one that seeks to build a muscular strategy to establish the foundations for peace – the human security of multi-ethnic communities. This could also include those armed forces personnel who feel they too are held hostage by Senior General Min Aung Hlaing and are having to execute scorched-earth policies, even of Buddhist communities. The regime’s senior-most leadership are known to have devised a system whereby even military families – including his close deputies in the inner circle, find themselves, to all intents and purposes, in a situation akin to being a hostage.

Since the ASEAN Special Summit in Jakarta in April 2021 that produced the group’s 5 Points-Consensus, the bloc has focused on the “inclusive dialogue” approach towards Myanmar’s different stakeholders – the military, political representatives that drew their legitimacy from the 2020 electoral victory of NLD, and non-Bama ethnic nationalities. Since that summit, Myanmar’s political and military situation has drastically worsened. The number of internally displaced persons (800,000+) now exceeds the number of Rohingya (740,000) who fled the country to Bangladesh in 2016 and 2017. Even before the universally rejected February coup a year ago, Myanmar in the military’s grip was amongst the world’s top five refugee-producing nations. Today, towns and cities, rural farming, and cross-border communities all face daily violence, constants searches and arrests, and summary executions by the regime’s troops. 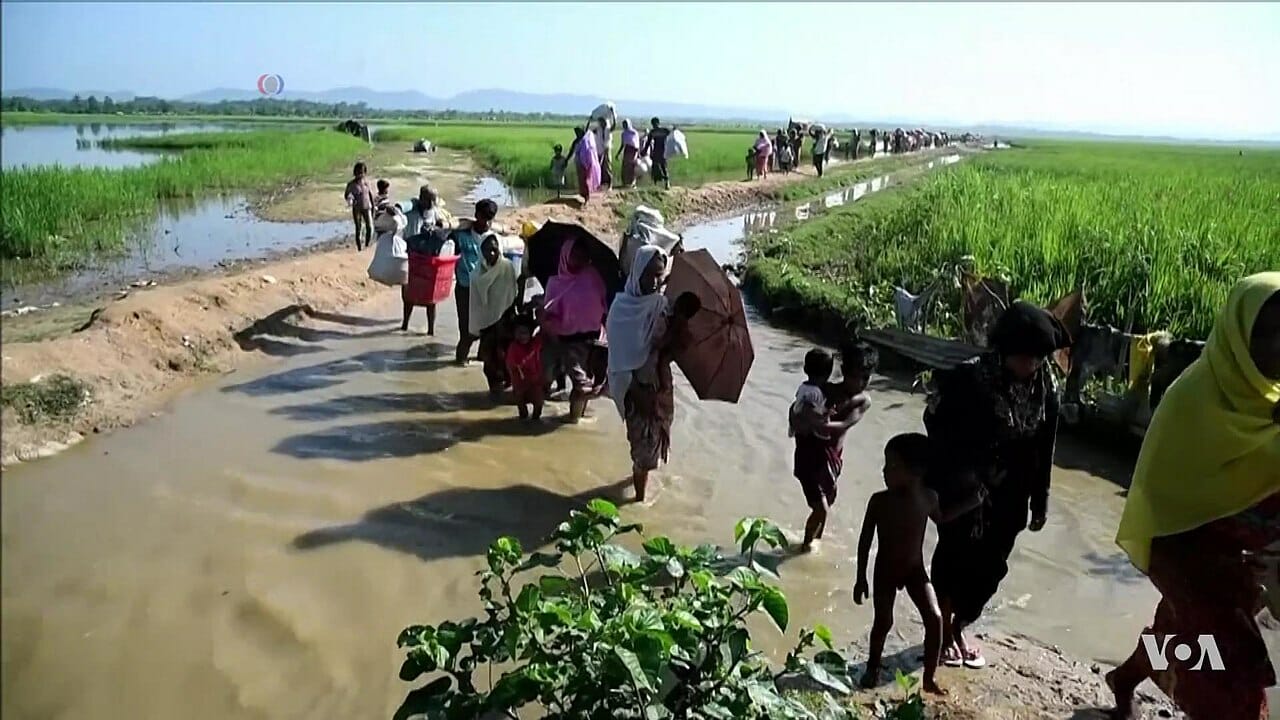 Rohingya refugees entering Bangladesh after being driven out of Rakhine State, 2017. Wikipedia Commons

All this has a major knock-on effect on the local economy, putting Myanmar on the brink of economic collapse. Livelihoods of millions of Myanmar people, who are not directly involved in the repression-resistance nexus, are increasingly threatened by the current political situation. Farmers and farm-labourers, the largest labour force in an agrarian economy, are unable to do their job of grain production.

Since the coup of last year, Myanmar may well qualify as a textbook example of the UN’s doctrine of Responsibility to Protect (R2P). However, the certainty of a double-veto by Russia and China has effectively ruled out any possibility of the application of R2P to Myanmar as a UN member state. Consequently, Myanmar people have pretty much lost their confidence in the United Nations. No Myanmar activist today utters the fanciful buzzword of “R2P”.

Against this bleak domestic and international situation, Cambodia, the current ASEAN Chair, should consider as a matter of strategy shifting the bloc’s narrative from one of “internal political conflicts that ought to be resolved peacefully through an inclusive dialogue” to the one that focuses on the absence of physical safety, deteriorating livelihoods conditions and rising and widespread violence. The security of 50-million Myanmar persons must be placed above the security of the state, itself being held hostage by the thuggish and genocidal leadership of Min Aung Hlaing.

​​This shift in approach would be underpinned by Min Aung Hlaing regime’s inability to control and run the state. Being weaponized against the people, the state organs in Myanmar are no longer functioning nor serving the interests of the nation: they not only fail to protect the people of Myanmar, but are increasingly the main source of political instability and insecurity. The regime’s administrative offices, not simply the military outposts, have become legitimate targets for bombings and killings by the resistance groups, estimated to be over 600 throughout the country.

ASEAN should explore seriously a proposal for the establishment of a web of Humanitarian Corridors across different regions of Myanmar with the worst human security conditions – such as Karen, Karenni, Kachin, Chin, Rakhine as well as some Myanmar Buddhist heartlands such as Sagaing, Magwe and Mandalay. Specifically, ASEAN Defence Ministries could work out a Humanitarian Task Force, with Cambodia as a natural leader. The post-civil war Cambodian leadership of Prime Minister Hun Sen has decades of experience working with external actors, from UN to China. Significantly, Phnom Penh’s “win-win” approach involved optimizing the power and influence of external actors over different domestic actors in order to bring an end to the civil war in Cambodia.​​

​​This proposal could be attractive to both China and other immediate neighbours such as Thailand, Bangladesh, and India for their respective interests including political stability. Both Bangladesh and Thailand have cried foul of Min Aung Hlaing regime’s blatant breach of their respective sovereign air and/or land spaces.

A new muscular ASEAN approach with the focus on re-establishing the stability and the essential human security in one of its member states, Myanmar, will remake ASEAN as a regional bloc capable of addressing major humanitarian and political crises. This is particularly pressing given the incurable paralysis of the Security Council and the impotence of the liberal West, preoccupied as it is with the Russian invasion of Ukraine.