The Tower of Polyphonic Babble

A poem by VINITA RAMANI, a freelance writer and editor. Vinita was born in India and has lived in Bahrain, UK, Hong Kong, Singapore, Canada, Cambodia and the United States. She currently lives in Singapore.

It began with depredation.
Then, the lush towers,
green-certified,
rooftop gardened, award-winning—

began wilting and crumbling one evening,
after the crisis.

2,800 high-end condominiums at various stages
of development
left barren and unfinished, became unkempt.
Sealant on walls shedding like flaking skin,
windows disassembling from hinges
and flinging themselves from great heights,
shattering in a dissonant soprano pitch.

An unjust decrepitude
as solitude crept up floors and stairwells,
wrapping and weaving itself into cement sinews
and brick bones.

Bromeliads, ferns, epiphytes and rosary vines,
replaced by gusts of air and their echoing sighs.

Quitters, stayers:
they knew they’d be quitting if they stayed.
500,000 homes reach for skies
the colour of gravel and sand,
skies too barren for rain,

but gilded in palm oil
and effervescent when it came.

965,200 migrants by some estimates.
Maybe a million, maybe more.

We —
worker, migrant, makkal, mudaliyaar, isai, kavi,
paagal, transient, domestic, transnational.
We stayed.
We, an inchoate entity, a people united in rubble.
Rabble rouser
with no house to house her.
Puraakode videgalum
inda thiranda nagaram.
This is my open, gaping, broken, brilliant home.
My stoop, my perch
with vertiginous drops to reclaimed earth.
The distended city suddenly quite starved,
But at least it staved off a blood-bath.

We, permanently transient,
our fugue state was subterfuge.
We knew —
Being outcast terrans, we were predisposed
to shifting terrain,
not fit to make territorial claims.

Varungaalam vasantha kaalam
Naalum mangalam
A time of great joy is upon us.

Debt, bond, bondage-free.
Makkal,
this is our time.
The sky is in our hands
the storms form in our mouths
the sun is in our bellies
and we are full of light.
Sundays will never be the same again
because we stayed.

Oh we’re patriotic, loyal loiterers.
Also wanderers, itinerants,
identifiable by papers,
if that makes you feel safer.
We’re not citizens,
And there is no citizenry
to civilise us.

I’m Indian, Bangladeshi, Filipino, Indonesian,
Burmese, Sri Lankan, Chinese.
This is a Hindi classic but we all speak Hindi now,
because Modi’s long gone but India is very much alive.

There is one vedu left unfinished
where we congregate.
We call it Sakthivel Kumaravelu1 Housing estate.
At the junction of Race Course and Hampshire road
where he was slain.
The Little India Riots.
They took place…
5, 10, 15, 50 years ago?
We only remember his name.

Filch a signal off a neglected cable
play YouTube channels of Tamil paatu,
sometimes children’s songs
Nila nila odi va
nillaamal odi va
malai melai eri va
malligai pu kondu va.2 The moon, nila, is corpulent
but our temples have been emptied of coins, jewels and filigree.
The idols naked, still serenely smile
and even an apocalypse cannot kill fire.
So we light deepams every evening,
and wrap the pantheon of gods and goddesses
in our lungis and handkerchiefs.
They look ready to work like us,
dusty, lean and burnt by the sun.

We touch the gods now.
We the priests, we the people
makkal
we’ve even broken the supposed glass steeple!

At 10.20pm
May 8th 2019,
an Organ of State
decided to protect us
from false and manipulative claims.

It’s been 5, 10, 15, 50 years and this is what’s left
The 50th anniversary of democracy under threat.
We celebrate how truth eroded the infrastructure of fact,
Its architects left long before the collapse.

It’s manipulative to manipulate
a weakened citizenry
into thinking
their truths are somehow false, surely?

This is no time to prevaricate
or pontificate about how POFMA3 determined our fate.
Another rabble rouser?
Really?
Another ranter in the rubble
babbling and haggling for the right to —
to what?
To hasten the diminution of public confidence.

To be diminutive
I want to be uncertain, even insecure
unwilling to prostrate, willing to procrastinate
to delay my allegiance to any Organ of state.
But that delayed reaction came too late.
They left a bill of gibberish in their wake.
In its place, an infrastructure of cut and paste
took over,
sophisticatedly called deepfake.

Was it 5, 10, 15, 50 years ago?
On that first, fateful day of the great departure,
past cars littered on empty expressways
the animals from the zoo escaped.
It was a catalogue of motley creatures.
a Sumatran elephant
a white-lipped rhinoceros
a wildebeest
a pack of African painted dogs
one pensive male Bornean orangutan
The entire troop of chimps and baboons.
And a bale of Burmese roof turtles.
Some wound up in Bukit Timah hill.
Others would follow,
when the vets and keepers left and did not return.
These animals, the first of their kind,
attempted to report on their inner states.

Captivity. What it is to be:
bounded yet safe,
managed, yet wild,
fed, yet hungry,
dependent yet free,
dying,
yet breeding in assurance colonies,
colonised but assured, insured with life.
Adored yet entirely misunderstood.
Categorized and campaigned for,
yet soon to be made extinct.
IUCN Red list heroes on the brink.

The macaques they found
were like the Vanaras of the Ramayana.
Occupiers, natives, exiles returned.
The sideshow to the main act of manly conflict
no longer.
They bred well, and being resilient,
they survived.

Its margins eroded, reconstituted
concretised and made angular.

But slowly that sand starts to slip away,
returns
to reclaim itself,
winds its way back to its ancestral lands,
seeking restitution.

Billions of particles
stolen in the night,
trafficked, shipped, tankered,
squandered, dredged, sequestered,
not by corsairs or privateers,
not by impoverished pirates
from the Riau Islands and Sumatra
wielding machetes and RPGs,
but by private contractors,
businessmen and government officials
unofficially, off the record.

They made refugees
of the land itself.
The land lost,
the land stripped,
the land taken,
the land becoming landless.

Trillions of sand grains fragment,
separate, then gather up as if impelled
by a magnetic force.
Like a gaggle of disparate particulates
they thunderously yawn,
yearning to go home.

The mangroves grow limbs
and line up along the coast,
revived and receptive to the dramatic return.

Crab, fish, coral and biota
in Vietnam, Cambodia,
Indonesia, Myanmar
and the Philippines,
lie in wait, in potential, extant, not extinct,
to rediscover habitat, to colonise and breed.
While the island, the city-state,
now smaller still,
rests finally, in bondage-free peace 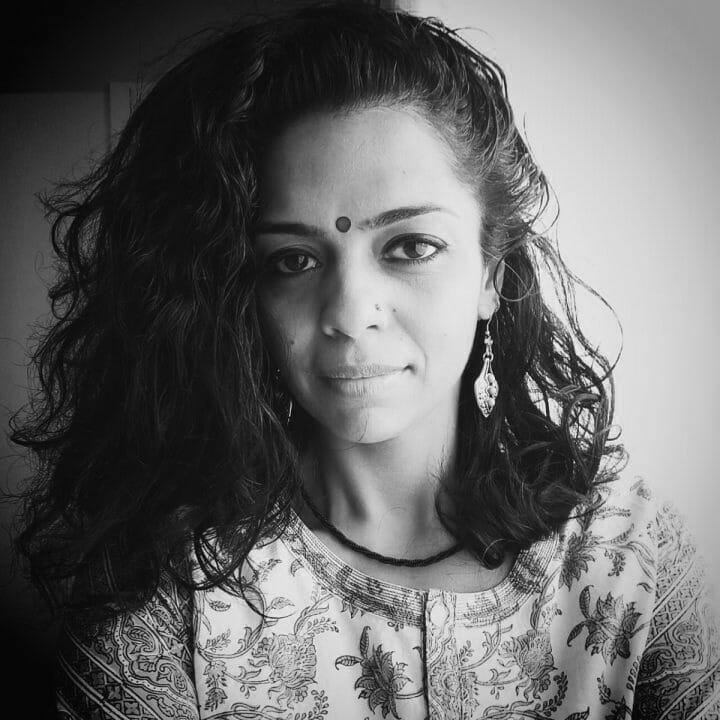 She has held roles as a contributing editor at RICE Media and as a data journalist and editor at Kontinentalist where she covered a broad array of topics including politics, race and identity and biodiversity conservation in Asia.

She was the co-founder of Access to Justice Asia, an organisation that engaged in transitional justice work from 2008 – 2014 at the UN-backed Khmer Rouge Tribunal (Cambodia) representing Khmer Krom survivors of the Khmer Rouge genocide. She was subsequently appointed a Museums Adviser to the Sleuk Rith Institute (Cambodia) and as a consultant curator with its progenitor, the Documentation Center of Cambodia in 2014 to produce content for permanent exhibitions in provincial museums documenting the narratives of genocide survivors. See full bio here: https://vinitaramani.com/index.php/about/