FORSEA condemns NUS Press’ blatant censorship of a book critical of the Thai monarchy, and urges all members of the academic community who are involved with NUS Press to uphold the principle of academic freedom by refraining from lending their legitimacy and credibility to NUS Press as an act of scholarly solidarity.

In an act which amounts to academic censorship, National Singapore University (NUS) Press violated the contractual agreement to publish an edited volume of research essays on Thailand and its protracted political crises much of which derived from or related to the country’s monarchy. The book also deals with Thai people’s struggles for democracy, human rights and freedom. It was edited by Pavin Chachavalpongpun, the University of Kyoto-based renowned Thai scholar and co-founder of FORSEA.

“Coup, King, Crisis” is an edited volume of scholarly essays on Thailand which resulted from a research workshop held at Stanford University in 2017. And its scheduled publication coincides with the turbulent critical royal transition in Thailand. The volume’s editor Pavin, Associate Professor of Southeast Asian Studies at Kyoto University, has already been charged with the draconian and anachronistic lèse-majesté, for his advocacy for making Thai monarchy a genuinely constitutional one in the mould of Japanese and British counterparts.

The timely book entitled: Coup, King, Crisis: A Critical Interregnum in Thailand is now published by Yale University (Yale Southeast Asia Studies, Monograph #68). It was finally released on January 2, 2021. But the road to its publication was not smooth. The Thai pro-monarchy regime appears to have succeeded in pressuring NUS Press into dropping the publication of high quality, but critical essays on Thai affairs. 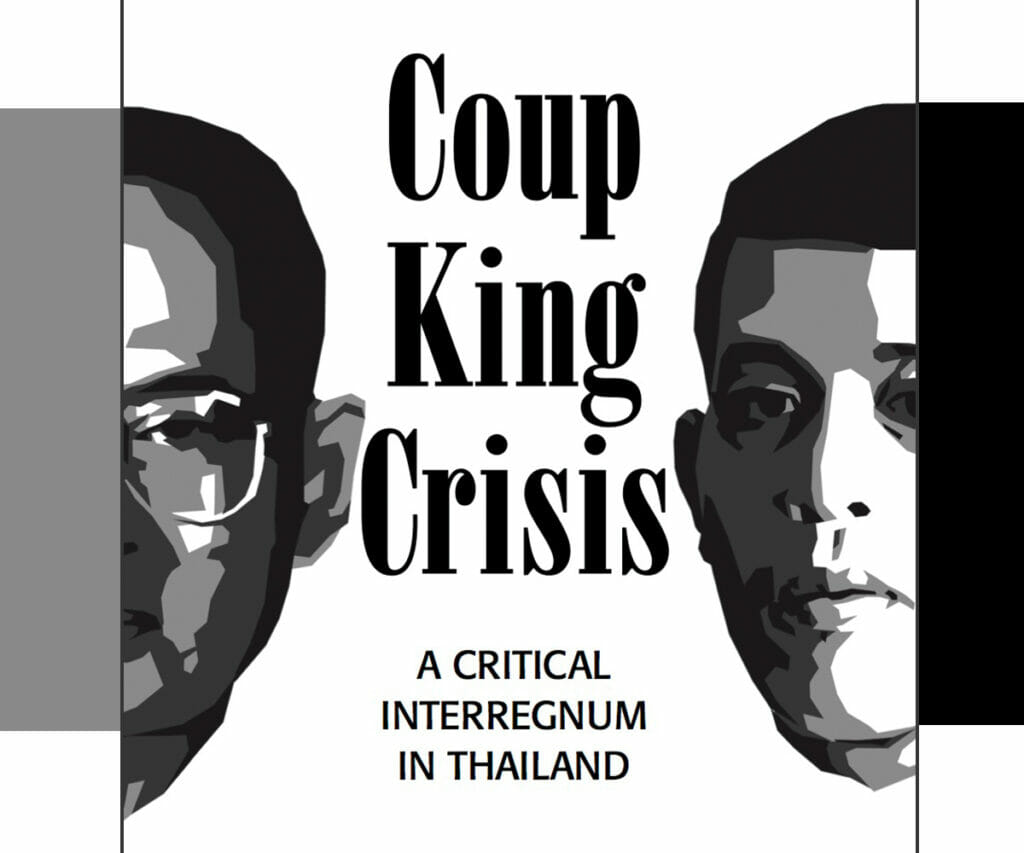 The editor Pavin and NUS Press inked the book contract in August 2019, with the target release date of Spring 2020. However, on the eve of the typeset manuscript going to the press, NUS Press violated the contractual agreement: Peter Schoppert of the NUS Press informed Pavin of NUS Press’s abrupt decision not to publish the book. In his official correspondence, Schoppert wrote:

It is with great regret that I have to inform you that NUS Press will not be proceeding with our publication of and distribution plans for Coup, King, Crisis. We intend to release the following statement: NUS Press made the  decision not to proceed with the planned publication of Coup, King, Crisis: A Critical Interregnum in Thailand. This is not the sort of decision a university press takes lightly, but it was taken after consultation with stakeholders within and outside the university community. We have informed the book editor, Assoc Prof Pavin Chachavalpongpun, and the contributors to the book, and released them from their obligations under our contract. We apologise for the late notice, and the inconvenience caused.”

Schoppert continued to say, “I understand that this will come as an unpleasant shock to you and the contributors. We regret that NUS Press must and does hereby give notice of termination of our agreement dated 29 August 2019. Accordingly all rights to publish and print the Work or to grant any interest in the copyright of the Work shall revert to you as the Editor with immediate effect. Even though NUS Press will not be proceeding with the publication of the Work, we are open to discuss, and hope to work out with you what measures that can be undertaken to mitigate the impact of the above.”

“I think the reason for NUS Press’s decision to drop my edited volume of high quality research papers is obviously not on intellectual or scholarly grounds. The essays are of highest quality of scholarship. Contributors in this volume are top-class scholars in the Thai studies. They are: Federico Ferrara, Claudio Sopranzetti, Paul M. Handley, Charnvit Kasetsiri, Kevin Hewison, Edoardo Siani, Paul Chambers, Sarah Bishop, Khemthong Tonsakulrungruang, Krislert Samphantharak, Tyrell Haberkorn, David Streckfuss and Somchai Phatharathananunth. Their timeliness is beyond questions and their use value goes beyond the walls of academy,” said FORSEA co-founder and editor of the volume. “NUS Press has definitely caved in to the political pressure, which I suspect comes from Singaporean authorities, who in turn are very likely appeasing their counterparts in Bangkok,” added Pavin.

As a matter of fact, the Thai authorities have in the past sought to pressure foreign academic institutions not to publish scholarly publications critical of its repressive and feudal kingdom.  The most widely reported case was the Thai government’s unsuccessful attempts to stop Yale University Press from publishing a well-researched book by Paul M. Handley entitled “The King Never Smiles: A Biography of Thailand’s Bhumibol Adulyadej” in 2006. Yale University Press upheld its integrity and contract by going ahead with its schedule release of the book.

Despite its high ranking among Asia’s top universities, NUS has previously been involved in a censorship row. In October 2019, the Yale-NUS College became embroiled in a row about academic freedom after axing a course on dissent, with the controversy fueling a wider debate on whether universities compromised their values to expand their markets abroad. The Yale-NUS College, a partnership with NUS, opened in 2013, drawing criticism from activists and its own faculty over the decision to set up in the city-state, due to its restrictions on civil liberties. Ironically, this latest incident in the latest project of Pavin saw him running to Yale to safeguard academic freedom.

Caving in to political and external pressure severely compromises academic freedom and diminishes the quality of intellectual works. By dropping the edited volume by Thai dissident scholar, NUS Press has condoned academic censorship. This type of academic censorship deserves widespread denunciation by the academic communities worldwide.

“I call on fellow scholars and academics to boycott NUS Press”, said Pavin, urging them to refuse to review manuscripts for publication by the NUS Press. This is to deny the legitimacy of NUS Press.

On behalf of the board of FORSEA