On 21 February, FORSEA hosted an international law roundtable with three Canadian and American legal scholars and practitioners immediately after the court’s completion of the first of the 4-public hearings on Myanmar’s preliminary objections to the court’s jurisdictions and Gambia’s legal standing with the court in The Gambia v Myanmar.

“Disappointing” “disingenuous” “absurd” were among the adjectives that were emphatically used by the discussants in reference to the ICJ’s handling of the highly controversial issue of lawful representation of a state party (or a signatory state) to the Genocide Convention, an inter-state treaty. 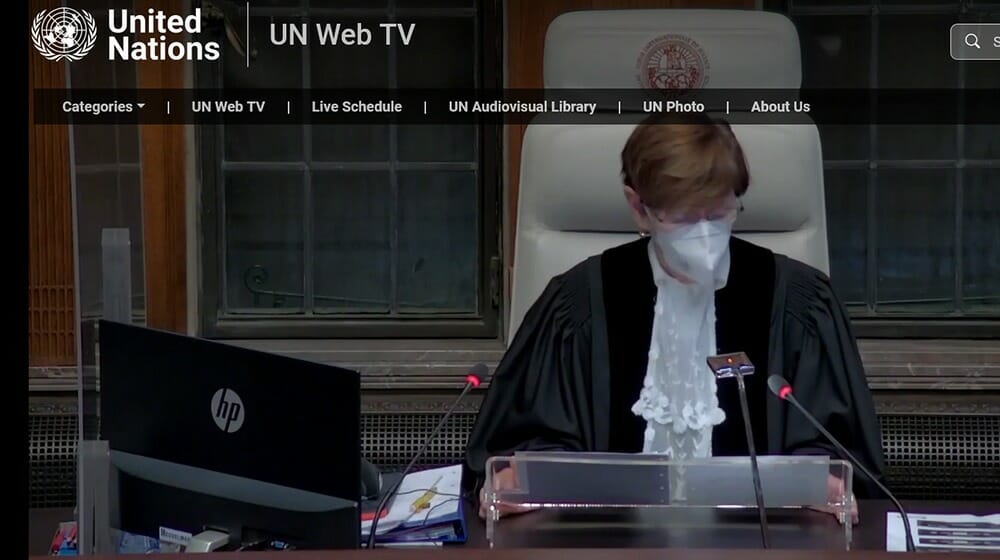 In his opening remarks at the FORSEA 1-hour international law roundtable, John Packer, Neuberger-Jesin Professor of International Conflict Resolution in the Faculty of Law and Director of the Human Rights Research and Education Centre at the University of Ottawa, lambasted ICJ President Judge Joan E. Donoghue (formerly of the US State Department) for addressing ex-Lt-Colonel Ko Ko Hlaing, Myanmar military’s representative to the court and a notorious genocide propagandist, as “Your Excellency”. In Professor Packer’s view this is a term reserved for dignitaries and official state representatives such as ambassadors.

In terms of international law, Packer pointed out that the court, as UN’s principal judicial body, is bound by UN Charter and cannot act above UN member states. ICJ was created by the United Nations to be in the service of the states. He repeated a crucial point made in the written-legal analysis The ICJ and the Issue of Lawful Representation in The Gambia v Myanmar ( https://forsea.co/the-icj-and-the-issue-of-lawful-representation-in-the-gambia-v-myanmar/ ) that “pursuant to applicable international law under the Charter of the United Nations (UN Charter), and in the absence of any law that unequivocally confers upon the ICJ the competence to decide matters of government recognition, the ICJ is not competent to determine the lawful representative of the Republic of the Union of Myanmar in the notified proceedings in The Gambia v Myanmar case.” 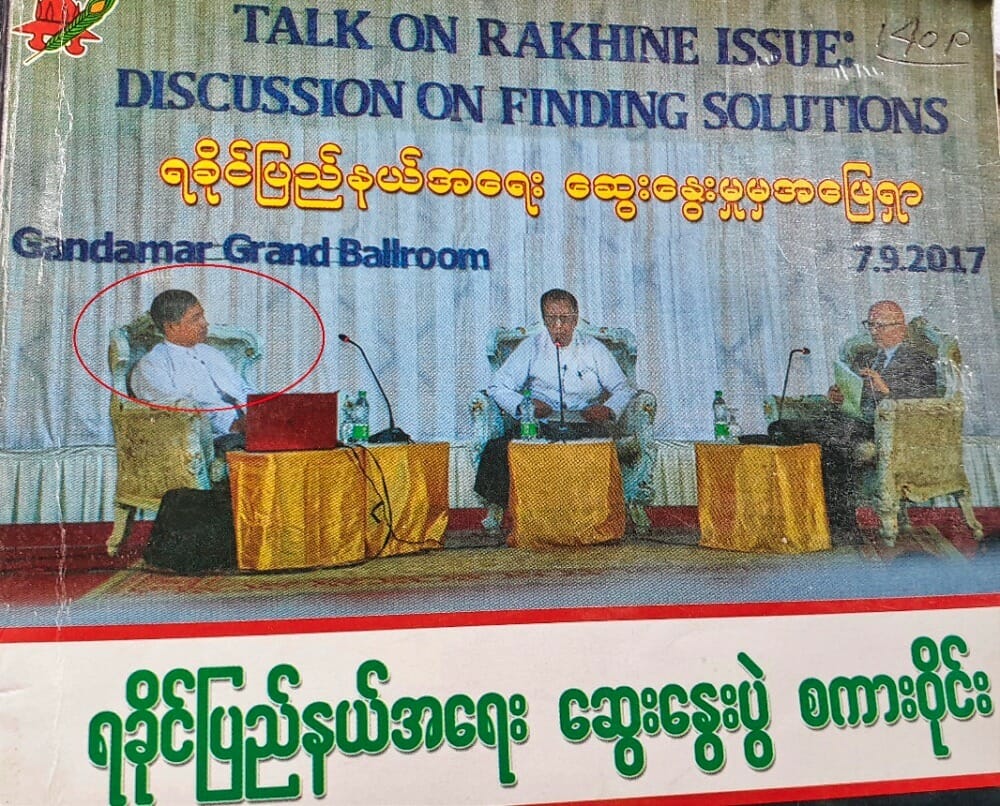 Ex-Lt-Col. Ko Ko Hlaing (in red-circle) seen in the security dialogue held in Myanmar capital Nay Pyi Daw on 7 September 2017 in the midst of the genocidal purge of 730,000 Rohingyas by Myanmar troops. He was joined by ex-Lt-Colonel Than Aung, former Myanmar Defence Ministry strategist, and the controversial expert on Rakhine, Jacques Leider of Luxemberg.

Errin Farrel Rosenberg, a former legal staff with the International Criminal Court (ICC) and Visiting Scholar with the Urban Morgan Institute for Human Rights at the University of Cincinnati School of Law, said it was “disingenuous” of the presiding judge of the court to casually mention, with no explanation, that the court was dealing with states, not governments, amidst the global outcry over the court’s acceptance of the Agent (or official representative) of Myanmar military.

Myanmar military enjoys no legitimacy or popular acceptance at home while being denied any representation at the United Nations General Assembly and excluded from the Association of Southeast Asian Nations (ASEAN).

The renowned genocide scholar and the American legal expert who drafted UN resolutions which created the International Criminal Tribunal on former Yugoslavia (ICTY) Gregory Stanton of Genocide Watch expressed his deep concerns that the ICJ’s erroneous legal reasoning of genocide cases with absolutely no corresponding human/social acts or behaviour – for instance, seeking to establish the one and only genocidal intent in cases involving allegations of genocide – will render the Genocide Convention completely “un-enforceable.”

The brief essay, which Stanton co-authored with Giada Corsoni, entitled “The Gambia v. Myanmar will decide whether the Genocide Convention is international law”, sounds the alarm as thus:

“Enforcement is one of the primary attributes that constitute law. If a law cannot be enforced, it can no longer be a law. It is crucial that the ICJ’s judgment in The Gambia v. Myanmar be used to correct the ICJ’s erroneous requirement that genocide be the only intent of a State to prove its special intent to commit genocide.”

FORSEA host Maung Zarni pointed out that there have so far been only 3 cases which have sought to apply the Genocide Convention – including The Gambia v Myanmar – throughout the 71 years since the convention came into effect, contrary to the scaremongering words uttered by Myanmar military’s legal counsel Stefan Tamlon. The ICJ judges heard from Tamlon that if the court allows non-injured states such as Gambia to bring genocide cases there will be proliferation of (genocide) cases which the court will find unmanageable.

Maung Zarni called the three scholars’ attention to the fact that one of Myanmar military’s legal counsels, Stefan Tamlon, had told the court that (in obvious reference to Gambia, a non-injured party in The Gambia v Myanmar), “states are not entitled to protect non-nationals”, because there is no nationality bond (in such cases). These words had echoes of Munich (of Nazi Germany) in the 1930’s. 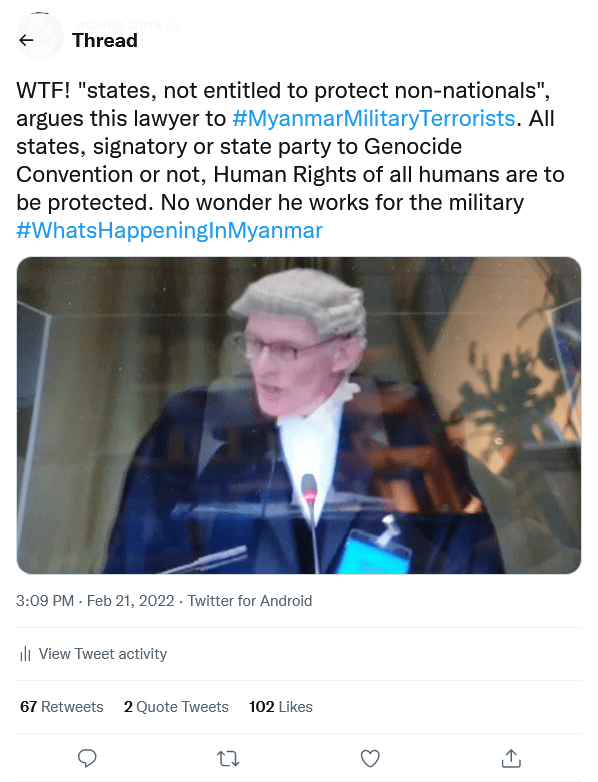 The guest scholars agreed that the National Unity Government of Myanmar – made up of elected and exiled MPs from the ousted Aung San Suu Kyi government, a handle of ethnic minority representatives and activists – should not be making the genocide case as if it were about their legitimacy versus the mass-murderous military of Myanmar. Neither has been recognized within the United Nations system of states as a lawful representative of Myanmar. If anyone who should be speaking for the UN member state of Myanmar – and at the ICJ – it is Myanmar’s Permanent Representative at the United Nations General Assembly, whose authority is derived from the previous, democratically elected government of Aung San Suu Kyi.

View the ICJ’s first-day of public hearings on preliminary objections raised by Myanmar in the case concerning Application of the Convention on the Prevention and Punishment of the Crime of Genocide (The Gambia v. Myanmar): https://media.un.org/en/asset/k18/k18b6xio3d

The 15-minutes interview touched on the admissibility of The Gambia v Myanmar or The Rohingya Genocide case, what constitutes a genocide and the court’s mishandling of the case.