NextWar is Not the Answer to Conflicts: Not in Ukraine Nor Elsewhere
FeaturedNEWS

Their lost lives this weekend should unify us. Their barbaric executions should instil a much-needed ethos of camaraderie – which calls for basic respect, appreciation and mutual support. It is way past time that every Myanmar that wants to rid the country of the genocidal regime of Min Aung Hlaing unite.  We must make sure that they did not die, in vain.

Myanmar’s widely reviled military junta that seized power in a violent coup last February announced on Monday that it had over the weekend executed the 4 pro-democracy activists that were tried, convicted and sentenced to death in a closed-door military tribunal. 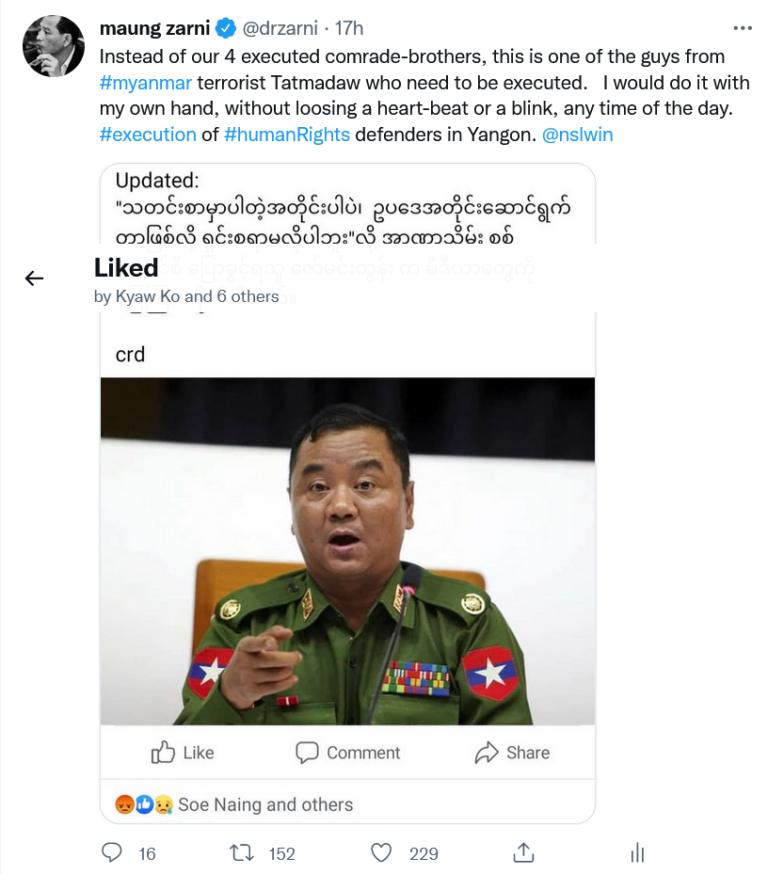 The junta leadership disregarded appeals for stay even from its friends within the Association of South East Asia (ASEAN), specifically Cambodian Prime Minister Hun Sen who has put his political credibility on the line, pushing for the continued embrace of the genocidal regime as part of “the family”.

International policies and approaches to Myanmar’s protracted internal strife are not working. Civil war has been raging on, with fluctuating intensity and a great impact on society, beginning three months after independence from Britain in 1948. The military has had contested monopoly over the state and its levers of power since 1962, with a brief 5-years of ineffective NLD rule under Aung San Suu Kyi’s nominally democratic leadership.  When the so-called international community has failed to view a full-scale genocide as a “turning point” or a “red line” and device policy responses effective and commensurate to the scale of the international crime, Myanmar junta feels it has effective impunity from the United Nations, despite numerous and empty statements of condemnations over its vile conduct since 1988 national uprisings. 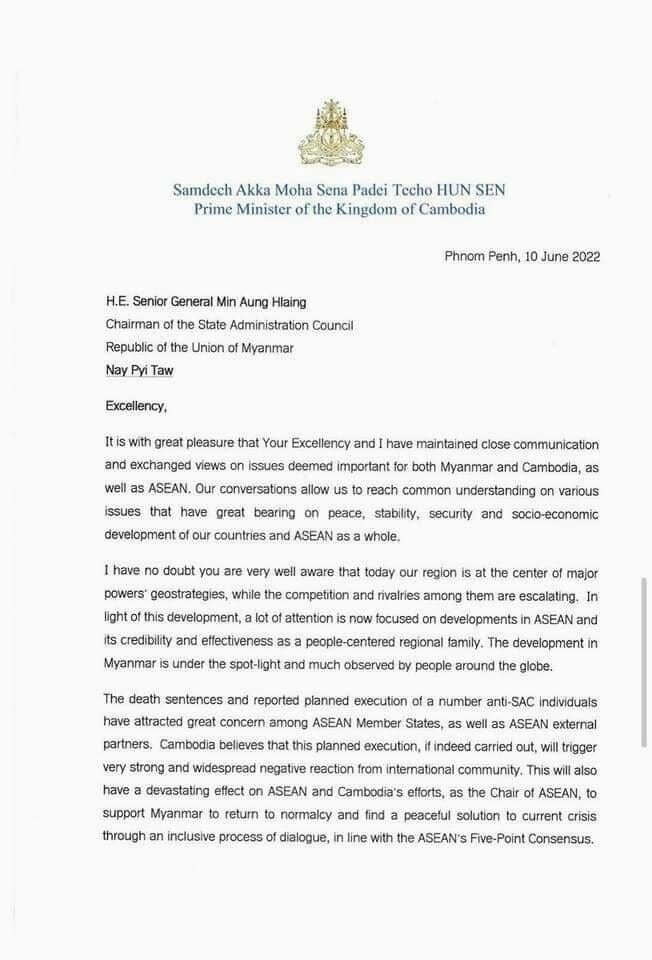 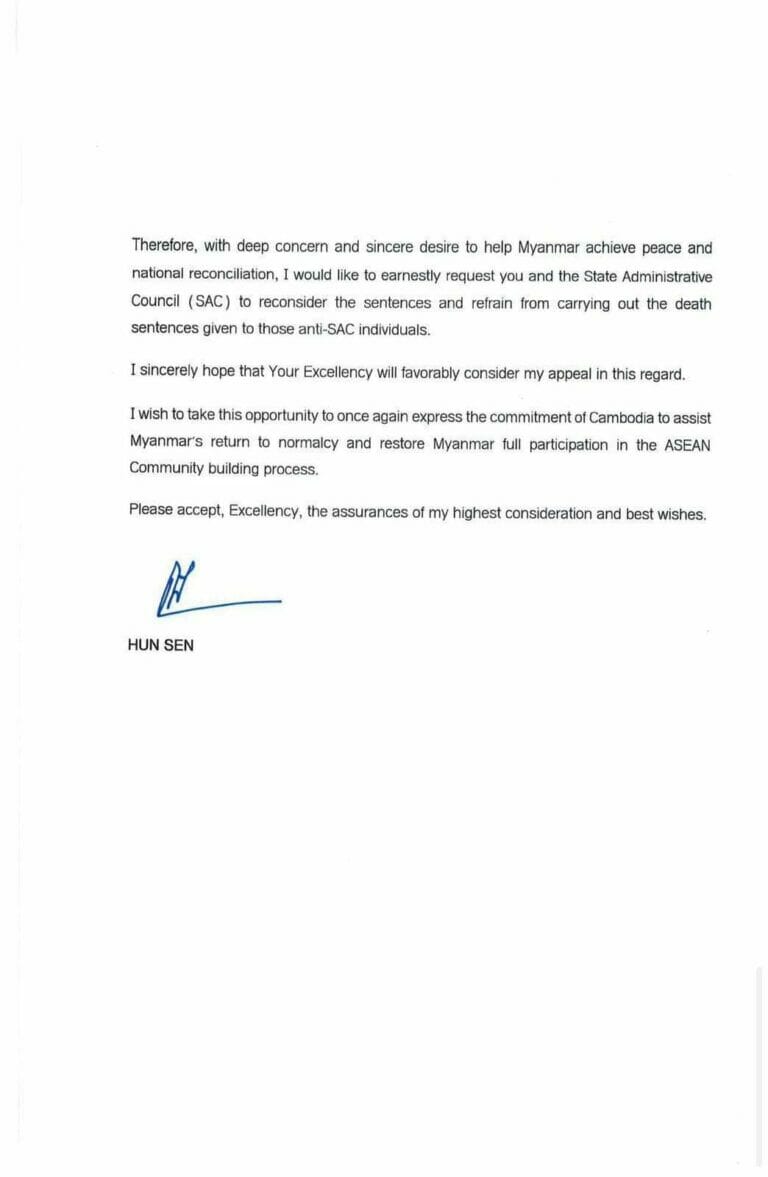 Nothing could be more Orwellian and sinister than the Burmese junta resorting to the discourse of “terrorism” and rule of law to justify this cold-blooded murder of rights activists involved in the nationwide and popular armed resistance against the most recent act of usurpation by the military.

To state the obvious, this is the regime that has violated every humanitarian and criminal law in international law books. It has committed a textbook genocide against Rohingya Muslims only 6 years ago (in 2016 and 2017). It has waged scorched-earth military operations against national minorities – 30  to-40% of the total population of 55 million – since the early 1960’s. With brutality, it has crushed waves after waves of peaceful and unarmed protests against its economically ruinous, neo-Fascist and politically repressive rule.

Burmese dissident Maung Zarni (@drzarni) responds to the Burmese military junta’s execution of four pro-democracy activists, the first use of capital punishment in the country in decades. “The military is very afraid of these four becoming martyrs for the resistance,” he says. pic.twitter.com/rFU3OpUl86

Of the 4-men, I met and “knew” Phyo Zeyar Thaw and Kyaw Min Yu (aka Ko Jimmy). Although my meetings with both – Zeyar Thaw who accompanied the NLD leader Aung San Suu Kyi to the London School of Economics in June 2012 and Jimmy in the Burmese student activists’ gathering in Thailand in the fall of 2013 – were fleeting my memories of them remain fresh. 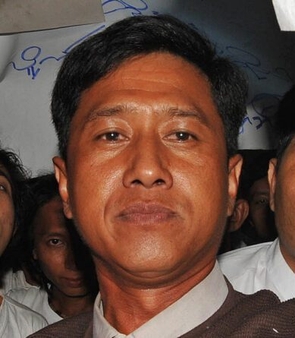 They weren’t friends.  They were more. They were my comrades who shared the same democratic values: Kyaw Min Yu was a key member of the progressive student-led political party called Students for a New and Democratic Society, founded in the wake of 1988 national uprisings against the 1st military dictatorship of General Ne Win and Zeyar Thaw was a popular hip hop artist who devoted his life to supporting the National League for Democracy, first as a party organizer and later as a member of the parliament.

On the Burmese language social media, there have been an outpouring of the expression of empathy for them and their bereaved families by those who knew them as close friends and colleagues in the party.

The news of their execution by the junta triggered my teenage memories of my late parents, whispering to each other similar news of the execution – by hanging – of Captain Ohn Kyaw Myint, the ringleader of the abortive assassination plot and coup attempt against dictator Ne Win and top-5 deputies in 1976.

I would never forget the deep pains in the eyes of both my mother and father who saw a small group of monks that went into the house of the executed captain’s home in Mandalay and instantly realized that their old classmate and friend at the university was no more.  They were chatting in the living room after they got home from work.  And I just happened to be sitting in the room when they exchanged the whisper about the tragedy – of a brave solider who tried to do the right thing – assassinate the top echelon of the senior military leaders who had only brought ruins and repression to the people and paid with his life two generations ago.

Although none of the executed activists could be called my friends, they meant comrades, to me.  Yesterday I felt a deep pain, something my late parents must have felt in 1976.

Most crucially, the executed activists and I share the same vision for a free and democratic Burma or Myanmar and pursue our mission through different approaches.  Jimmy and Zayar Thaw were staunch supporters of the NLD and its leader Aung San Suu Kyi, and I am the most trenchant critic of hers. Still, there must be a sense of camaraderie based on this shared mission of a free and inclusive new society of Myanmar.

Their lost lives this weekend should unify us. Their barbaric executions in cold blood should be an occasion that instils in us a much-needed ethos of camaraderie – which calls for basic respect, appreciation and mutual support. It is way past time that every Myanmar that wants to rid the country of the genocidal regime of Min Aung Hlaing unite.  We must make sure that they did not die, in vain. 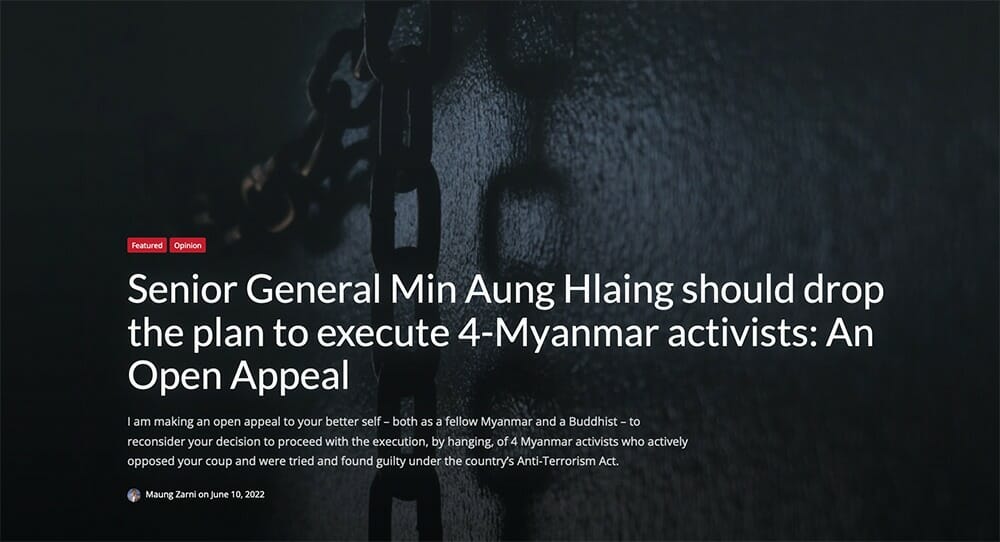